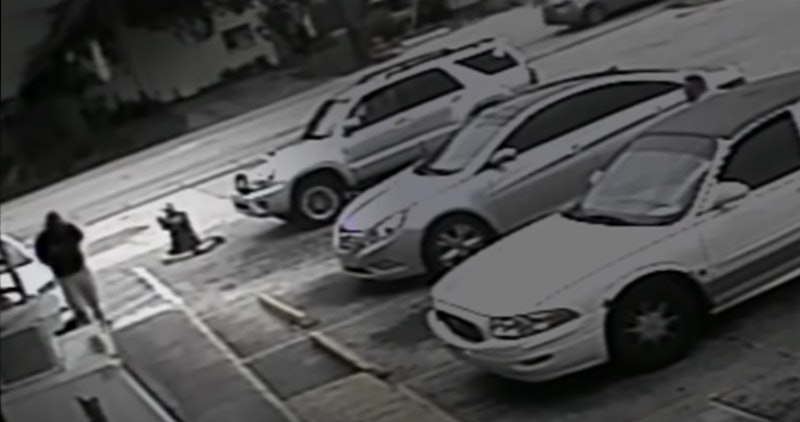 Last Thursday a Florida man was shot and killed following an argument over a parking spot in front of his kids, but authorities say the man who pulled the trigger won't be charged. The sheriff cited the Florida "stand your ground" law in Markeis McGlockton's death, and the killer won't be charged. That decision has drawn outrage and comparisons to George Zimmerman killing Trayvon Martin.

Before the shooting, Britany Jacobs was sitting in her car with her two youngest children, while her boyfriend, McGlockton, was inside a convenience store with the couple's 5-year-old. Michael Drejka approached Jacobs in the vehicle and began an argument about whether or not she could be in the handicapped spot where the car was parked.

As seen on video surveillance, McGlockton comes out of the store to find Drejka confronting Jacobs. He shoves Drejka to the ground, and Drejka then pulls a gun from his pocket. McGlockton takes two steps back, and Drejka pulls the trigger. McGlockton retreats into the convenience store, and he's pronounced dead at the hospital.

At the heart of the case are those two steps and Florida's "stand your ground" law, former Florida state Sen. Chris Smith tells Bustle. And one key similarity between this case and Trayvon Martin's death jumps out, Smith says.

In 2012, Martin went to a convenience store, bought some Skittles, and encountered Zimmerman on his walk back. The neighborhood watch volunteer called 911 on Martin, telling dispatchers that he looked suspicious and was going to follow him. What happened next is unclear, but it ended with Martin dead on the grass. He was shot by Zimmerman, who claims he was attacked and it was only self defense.

"The problem with 'stand your ground,' just in this case like the Trayvon Martin case, who is truly the aggressor?" Smith — who was a Florida state senator when Martin was killed — says. "Was it George Zimmerman in his trailing and confronting? In this case, was it the man who did the shooting when he was arguing with and confronting the girlfriend? It's hard to define.

Smith, now an attorney at Tripp Scott law firm in Florida and a commissioner on the Florida Constitution Revision Commission, acknowledges that McGlockton pushing Drejka is aggressive. But it wasn't what initiated the altercation. The fact that Drejka was yelling at Jacobs "is an aggressive act," Smith says. "It's so subjective as to what the aggressor is."

And because of the law, Smith tells Bustle, there are likely to be more shootings like this one, and like Martin's, too. The exact number of such cases unknown; the State of Florida doesn't keep statistics. But "stand your ground" legislation has spread to some 25 states since Florida approved its version in 2005, the Giffords Law Center to Prevent Gun Violence reported.

In this case, with a typical self-defense law, Smith says, when McGlockton starts to back up, Drejka would no longer be able to claim it was self defense. But with the "stand your ground" rule, Smith says, "it gives people that extra, 'Oh, I can shoot this guy. I don't have to walk away.' It empowers people to do these kinds of things."

Pinellas County Sheriff Bob Gualtieri's says he's just following the law. “I don’t make the law — we enforce the law,” Gualtieri said after the shooting. “And I’m going to enforce it the way it’s written, the way the Legislature’s intended for it to be applied. And others can have the debate about whether they like it or not.”

Meanwhile, Jacobs wants "justice," as she told Good Morning America on Under the current Florida law, that may be difficult.