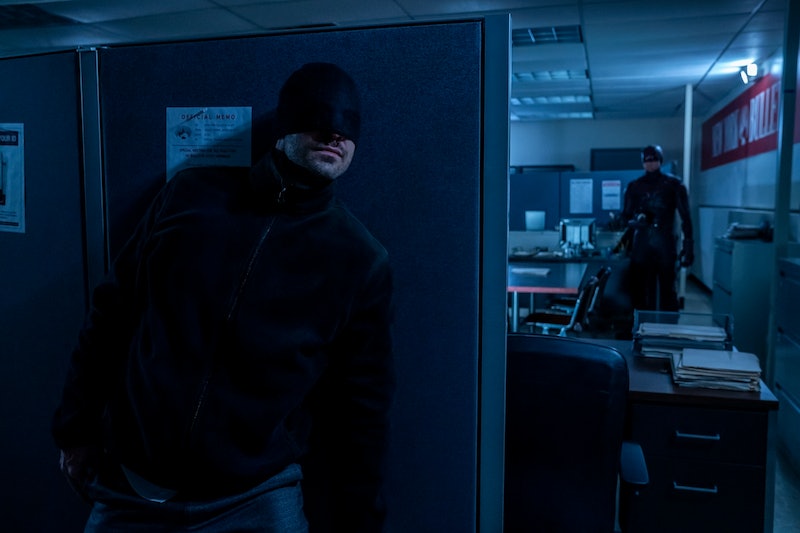 Spoilers for Daredevil Season 3 ahead. While Marvel fans are resigned to the fact that all television shows set in the MCU will not be affected by Avengers: Infinity War in 2018, the rough and tumble Netflix heroes are going strong. After seemingly dying at the end of The Defenders and leaving Luke Cage, Danny Rand, and Jessica Jones to take care of his city, Matt Murdock is back and sullen as ever. And that, combined with the Marvel Easter Eggs in Daredevil Season 3, bring this Netflix universe full circle, harkening back to where things began.

Daredevil started the street level Defenders universe of Marvel heroes on Netflix, and after ten seasons of six different series, this solo outing is returning to its roots. Electra and Frank Castle, comic book vigilantes with domineering personalities, sort of took over Daredevil in Season 2. This isn't the case in Season 3. Many of the characters and storylines from the very beginning are back instead— for example, the Kingpin Wilson Fisk.

This isn't to say that there aren't new additions that Marvel fans will appreciate. By now, fans have learned that Wilson Bethel's mysterious "FBI Guy" character in Daredevil Season 3 is actually, according to Entertainment Weekly, Benjamin "Dex" Poindexter, also known as Bullseye, from Marvel comics. The antagonist was played by Colin Farrell in the 2003 movie. At New York Comic-Con, also according to EW, Marvel Television President Jeph Loeb referred to the Bullseye reveal in Season 3 as the "worst kept secret in the history of Marvel." However, there are still plenty of secrets and surprises in Daredevil Season 3. Check them out:

Are the Sokovia Accords part of the reason why Matt, a vigilante, can't get treated at Metro-General, Marvel's favorite hospital and former workplace of Claire Temple? That may be a stretch, but the show does remind audiences right off the bat that even non-Avenger heroes face certain complications in New York City. At the end of Episode 2, we first meet Dex who, later reveals his vigilante aspirations. He doesn't like being painted as violent and dangerous while those with masks do what he does and get to be heroes.

The first three episodes reintroduce characters like Ben Donovan, Fisk's corrupt lawyer who also represented Mariah Stokes, as well as District Attorney Blake Tower — who first appeared as an ADA in Season 1. Fisk's love interest Vanessa Mariana is mentioned, as is Foggy's girlfriend Marcy. The latter actually appears in Season 3. Are Foggy and Marcy the only stable romantic relationship in the Defenders universe? Probably!

Karen Page's office at the New York Bulletin often displays headlines that call back to various events in the MCU. The "Harlem Terror" is likely either a reference to a Luke Cage showdown or The Incredible Hulk, for example.

Foggy Nelson's political aspirations may be short-lived on the Netflix series, but Matt's BFF does actually become District Attorney in the comics. Look out, Tower!

In Episode 5, Karen assures Foggy that she didn't give up Matt's identity to the FBI. However, in Frank Miller's "Born Again" Daredevil comic, that's exactly what she does. Instead, in this scene, Karen confesses to killing James Wesley in Season 1. Given the amount of time that Karen has been spending with the Punisher, who makes it a point to kill other killers, it's understandable why she hasn't brought this up earlier. She and her boss at the Bulletin also mentions Ben Urich in these episodes, RIP.

On the Bullseye side of things, Dex is referred to by his full name at this point, and someone makes an offhand comment using his future moniker. At the end of Episode 6, Dex puts on a suit like Matt and claims to be him. Bullseye does impersonate Daredevil in the comics.

Jack "Jiggy" Kem, the mobster from Nadeem's past, may sound like a comic book name, but it's just a good imitation. MCU references in this chunk of episodes include the "Rabbit In A Snowstorm" painting that Fisk was attached to, the return of Melvin Potter and his parol officer girlfriend Betsy. We actually get to see Betsy this time, too!

Then, in Episode 8, Matt learns that Sister Maggie is actually his mother — something that fans of Jack Kirby's Daredevil comic run knew all along.

In Episode 9, Matt revisits the ring where his father used to practice. The sign advertising his fight against Carl "Crusher" Creel, a Marvel character who appeared on Agents of S.H.I.E.L.D., is still on the wall. While the criminals and FBI agents that Fisk gathers aren't Marvel characters, the agents do finally refer to Fisk by his comic book nickname at the end of the episode: Kingpin.

Episode 10 takes a backseat from Marvel lore as it digs into Karen's past. While her parent's names are Paxton and Penelope in the comics, their story is different in the MCU. However, the end of the episode includes an extended homage to Karen's death in the comics, with the exception that, spoiler alert, Karen does not die.

Detective Brett Mahoney pops up in Episode 11 and sees the end of the season out, even sharing scenes with Blake Tower. Mahoney hit the streets in Daredevil Season 1 as well as Jessica Jones and The Punisher. He's one of the good guys. Vanessa, Fisk's criminal lover, returns as well in Episode 12. Also in Episode 11, Lesley Ann Warren's character Mrs. Falb compares Wilson Fisk to the Nazis that terrorized her family and stole their works of art, calling them "men like you." In The Avengers, Loki is also compared to Nazis using a similar phrasing.

Wait. The girl Dex met at a suicide prevention hotline's last name is Barnes? Think Julie Barnes is related to James Buchanan Barnes? That may have to be a headcanon — though it would make an amazing Easter Egg.

The final moments of Season 3 tease some exciting things to come. Well, it's not exciting when Matt calls Karen "way more stable" than Jessica Jones and suggests she become a private investigator. That's so rude!

I'm talking about the spinal injury that Dex sustains, and the literal bullseye that flashes over his pupils in the final moments. Bullseye breaks his back in the comics. The doctor patching him up on Daredevil is called Oyama, also a Marvel character called "Lord Dark Wind." Cogmium steel, which is being used to patch Dex up, does appear in an Iron Fist comic, though it isn't as famous as fictional Marvel metals Adamantium or Vibranium.

Though Daredevil Season 3 kept things close to home in terms of Marvel references, there's still a lot to come, and teases like this make it fun to anticipate what's next.