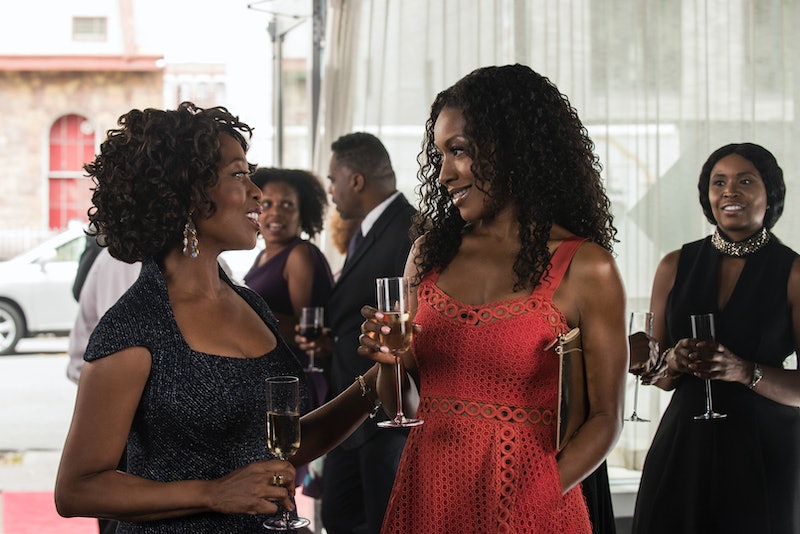 Spoilers for the entirety of Luke Cage Season 2 ahead. Luke Cage may have superpowers, but despite his various team-ups with other Marvel comics characters, he's a lone wolf. The new season of his Netflix series makes that all the more clear. The Marvel Easter eggs in Luke Cage Season 2 stray further and further from big screen adventures but reinforce how small the world of the Defenders is.

Let's just get this out of the way first: that thing that happens at the end of Avengers: Infinity War does not happen in Luke Cage Season 2. Perhaps, even, by the time the Netflix series returns for Season 3... all of that won't even matter.

There also aren't any references to Spider-Man: Homecoming or any of the other recent films in the Marvel Cinematic Universe in Luke Cage Season 2. The Sokovia Accords don't seem to have affected these heroes. Stephen Strange is leaving them alone as well. The New Yorkers in the Defenders universe are primarily concerned with remembering the Chitauri attack that happened in the first Avengers move. They call it "the Incident" and sometimes throw a vague reference to one of the costumed heroes that saved the day in the sky — "flag waver" is one particularly silly example, used to describe Steve Rogers.

That said, there are plenty of Defenders and Marvel comics references throughout. It really has become a small world, even if characters like Maria Hill or members of that whacky church in Runaways never show up.

For those who approach the Marvel Netflix shows on "Claire Temple Alert," this season is initially a blessing. There's even a song in the episode called "Night Nurse," which is maybe too cheesy to handle.

Luke is also seen reading Ta-Nehesi Coates in the episode, who among other things has written several Black Panther comics.

One interesting thing to note, that is kind of a reverse Easter egg and will be addressed further later on, is that Luke Cage references Barack and Michelle Obama as well as Joe Biden. This is atypical in the Marvel Cinematic Universe. On the big screen and on Agents of S.H.I.E.L.D. the President of the United States is a man named Matthew Ellis. The adage "shut down one corner, two more pop up" may sound like a Hydra thing to say, but it's probably not a reference.

“What Matt Murdock did under Midland Circle” is referenced during one of Claire and Luke's early conversations too. Claire also calls Luke "Power Man," one of his titles in the comics. As for new characters, Bushmaster is a Marvel villain as well as Raymond Piranha "Cockroach" Jones.

In Episodes 2 and 3, characters like Reva and Kilgrave from Jessica Jones, where Luke was introduced, are mentioned. Colleen Wing and Danny Rand are also brought up in conversation — and "the barefoot billionaire" is probably the best descriptor of the immortal Iron Fist ever. Also introduced, but not quite to her full comic book potential yet, is Mariah's daughter Tilda. So as not to spoil, keep reading to discover her true identity.

Misty Knight fans rejoice, because she finally gets her bionic arm in Episode 5. Foggy Nelson also appears, still mourning his pal Daredevil. He asks Luke if he would ever wear a mask and it's devastating.

Smaller references include Turk, the friendly neighborhood weapons dealer, and "gangsters with powers" that could apply to several villains Luke has fought over three series. There is a Marvel character named Anansi but he's an alien, not a Jamaican.

Is Luke Cage trolling the internet? Someone asks Luke “who’s tougher you or the green monster,” talking about the Hulk, and a friend replies “that’s not his name.” These shows never mention the Avengers by name, and it always feels like a joke.

Luke saying "you wanna hire this hero" is a reference to his Marvel team-up with Iron Fist, and you know what? Wu Tang might as well be an Iron Fist reference at this point, too, as RZA directed an episode.

So... This Is Us exists in the MCU. Do you think Erik Kilmonger ever watches the ABC melodrama and wonders why that one guy looks so much like his Dad? Something to think about! Someone also mentions a chimichanga, which (this is a joke) has got to be a Deadpool reference.

Marvel fans on to Tilda's identity will understand the nightshade reference in Episode 7. More importantly, Rand Industries shows up! The group hides in an abandoned office for a brief period. Mariah also mentions that her nickname as a child was Black Mariah, and that's a comic reference too.

Another corporation mentioned during this stretch of the series is Hammer Tech — owned and operated by Iron Man 2 villain Justin Hammer, who was of course played by Academy Award winner Sam Rockwell. It's good to know that his nefarious character/legacy is still out there in the MCU.

Not only does Danny Rand show up in Episode 10, he absolutely insists on reminding the audience that real dragons totally exist in the Marvel Universe. Good on you, Danny! The enterprising D.W. calls them "Power Man and Iron Fist," which is the name of a comic the two Marvel characters appear in together.

Turk shows up as well, and characters like Madame Gao and Jessica Jones are mentioned in passing. The Asian woman who protected Luke in Season 1 also shows up — and thankfully, she has a new restaurant.

Throughout the season, Mariah has been working with Atreus Plastics, which has shown up on Daredevil and is a name from Marvel comics but not one of much consequence. So is Rosalie Carbone, the mafia "princess" that Luke meets in the finale.

What is the vaccine that Bushmaster receives in Jamaica? Difficult to say, as Bushmaster got his powers from regular ol' super-soldier serum in the comics. Yep, the same stuff that "created" Captain America. It has different effects on different people!

Speaking of America, what's going on with the "November 9" and "Make Harlem Great Again" references in the season finale? Please don't let Donald Trump be President in the Marvel universe. Isn't having to deal with Thanos stressful enough?

Finally, with Tilda's reveal that she would like to go by Tilda Johnson, her transformation into the Marvel villain Nightshade is complete. The outfit she wears to Harem's Paradise in the final scene is also reminiscent of her comic attire. Using poisonous lipstick is likely not an Agent Carter reference, but that did happen on that series as well.

The end of the season, in which Luke is running Harlem's Paradise and distancing himself from his super friends, is slightly concerning even in this gritty street-level hero world. When Iron Fist and Daredevil return, the Luke Cage Easter eggs might not be all that fun. Hopefully the Defenders will be united again, and fast.