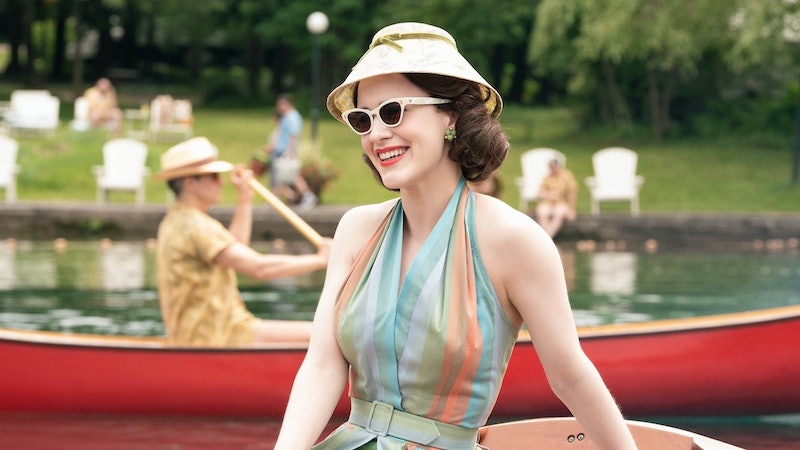 Amy Sherman-Palladino has no patience for mom-shamers. The creator of Marvelous Mrs. Maisel shut down criticisms about Midge Maisel’s (Rachel Brosnahan) parenting during a virtual comedy showrunner roundtable for The Hollywood Reporter on June 29. When the conversation turned to criticisms of Midge's white privilege in the Amazon Prime Video series, Sherman-Palladino said she doesn’t “give a sh*t” about such appraisals — but she has zero patience whatsoever when it comes to criticisms of the comedian being a bad mother.

“No, I never give a sh*t about that, especially when you're dealing with women characters,” Sherman-Palladino said of Midge’s perception by audiences. “I started on Roseanne: I was in my 20s, and it was me [and] a [female writing] partner, and we were the only girls on staff, and you learn really quickly what the views on women were." She continued, "What was likable and what was, 'Oooh, don't yell too much because you're too strident’... So, I have never gone into anything worried about what people are going to think in those terms.”

When it comes to criticisms of Midge being away from her children due to her career, however, Sherman-Palladino said, “I have no patience for that sh*t whatsoever.” She explained, “I never saw one person say dick about Don Draper in Mad Men not hanging out with his kids, so f*ck that sh*t. These kids have two sets of grandparents who dote on them, and they have a father that's there all the time.” She continued, “If this woman has to go out on the road to make a living, f*ck you if you have an issue with that — and I mean that with all the love in my heart.”

Set in late 1970s New York, Marvelous Mrs. Maisel follows housewife Midge Maisel (Brosnahan) as she pursues a risky career as a stand-up comedian. With the support of her agent Susie (Alex Borstein) and her well-meaning but sometimes outlandish parents (Tony Shalhoub and Marin Hinkle), Midge’s life takes a turn as she tours comedy clubs and finds her way at the top of the comedy biz, which means being away from her two young children.

This isn’t the first time members of the cast and crew have responded to critiques of Midge’s parenting. Brosnahan similarly said she was tired of being mom-shamed during a panel interview with SiriusXM Stars last December. “I have a lot to say about this,” Brosnahan said, per Entertainment Weekly. “These kids are being raised by a village and it has been so surprising the level of mom-shaming aimed at this fictional character.”

Brosnahan continued, "They have four loving grandparents, they have a Zelda, they have the privilege of having so many different people around to help them raise their children. They’re not perfect."

More like this
Everything To Know About 'Only Murders In The Building' Season 3
By Gretchen Smail and Kadin Burnett
Twitter Is Identifying With Sally Field & Jane Fonda’s Friendship In New Viral Video
By Jake Viswanath
The 'Teen Wolf' Creator Revealed If 'Wolf Pack' Takes Place In The Same Universe
By Grace Wehniainen
Here’s What Happens To Bill & Frank In 'The Last Of Us' Video Game
By Brad Witter
Get Even More From Bustle — Sign Up For The Newsletter
From hair trends to relationship advice, our daily newsletter has everything you need to sound like a person who’s on TikTok, even if you aren’t.