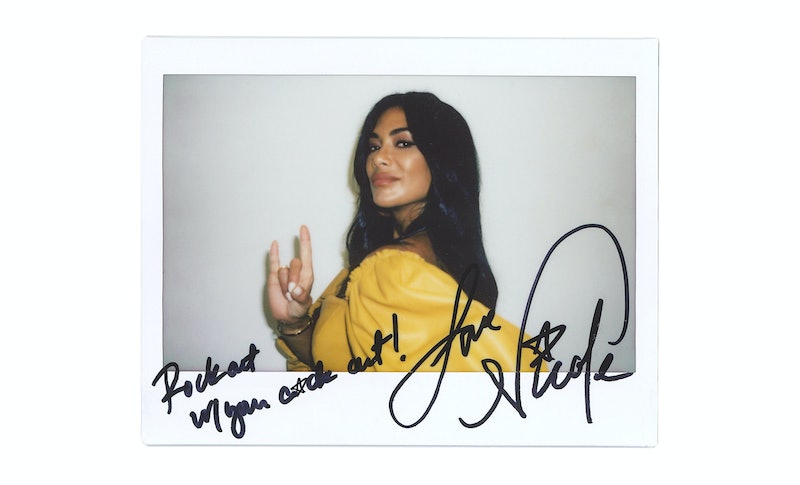 When celebrities hang out with Bustle editors, we want to give them the chance to leave their mark. Literally. So we hand them a pen, a piece of paper, a few questions, and ask them to get creative. This time, The Masked Singer judge Nicole Scherzinger is leaving her mark in the Bustle Booth.

The first time Nicole Scherzinger saw a contestant perform on The Masked Singer, she thought she was on drugs. "We all felt like someone slipped us something," she says of the judges' initial reactions. "I don't do drugs, and I don't need to watching a show. I was like, 'What is happening?'" It's not that different from her reaction when she was first pitched the idea of The Masked Singer. "People are either going to love this or hate this," she recalls thinking at the time. "It's gonna be amazing or just fail miserably."

It's the wildly ornate full-body costumes that mask the singer's identity that truly make the experience surreal, and Scherzinger teases that Season 2 is going to be even more bonkers. "The more out there, the better," she says. "We're embracing the madness on the show." Season 2, which premieres Wednesday, Sept. 25, will include one performer dressed as an egg, another as a silver Christmas tree — if that's not "out there," what is?

As the show is upping the ante, so too are the judges. Scherzinger teases that the judges are all coming with their A-game this year — no wacky guesses this time around. "I think we've all put on our detective hats," she says, "more of a strategy." Though after a beat she admits, "Somehow, Ken [Jeong]'s gotten worse with his guesses."

But, despite all the extravagant stagecraft, Scherzinger says that The Masked Singer is really about stripping away assumptions and encouraging people to be their true selves. "I think the irony, but the beauty, of the show is that even though these people's faces are covered, we are truly able to connect with them in the most authentic way. The mask gave them a kind of superpower shield where they feel more courageous to tell their true stories, be their authentic self," she says. "Even though they're masked, they're finally able to bare it all."

And the contestants competing in The Masked Singer Season 2 are definitely ready to leave it all out on the stage. Why else would Scherzinger draw the mind-blown emoji in her Bustle Booth to describe what happens next? Check out the rest of her answers below.

More like this
'That '90s Show' Star Callie Haverda Got Advice From Mila Kunis & Ashton Kutcher
By Brad Witter
Hailee Kaleem Wright's Topsy-Turvy Path From MTV To Broadway
By Samantha Leach
'RHOP' Stars Robyn & Juan Reportedly Got Remarried & Filmed The Ceremony
By Brad Witter
Kylie Jenner Clarified How To Pronounce Her Son's New Name
By Jake Viswanath
Get Even More From Bustle — Sign Up For The Newsletter
From hair trends to relationship advice, our daily newsletter has everything you need to sound like a person who’s on TikTok, even if you aren’t.