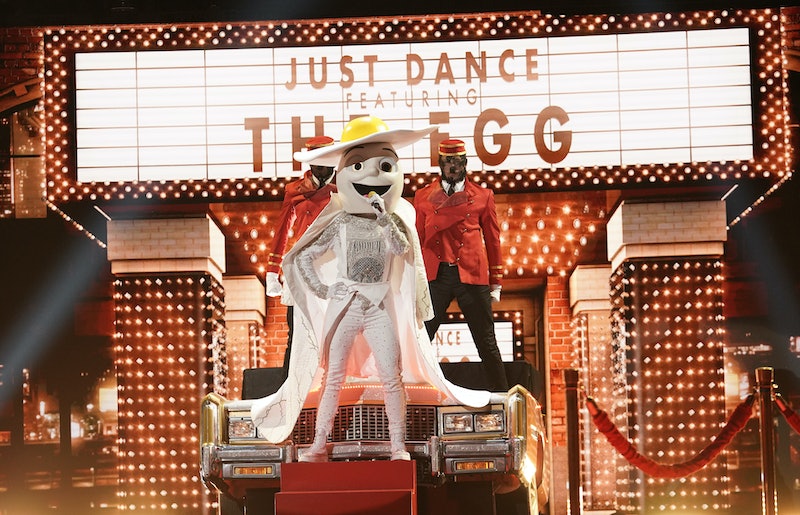 The Monster, Peacock, and Bee are so last season. Fans now know all but two of the costumes for The Masked Singer Season 2, and, this time around, the disguises themselves could provide some clues of the singing celebrity contestants' identities. Officially, Fox has revealed eight new Masked Singer costumes on Twitter: The Skeleton, The Eagle, The Flamingo, Mr. Fox, The Leopard, The Butterfly, The Panda, and, yes, The Egg.

Unlike Season 1, the upcoming installment of the musical guessing game (premiering Wednesday, Sept. 25 at 8 p.m. ET/PT) will include 16 incognito performers, instead of 12. On Aug. 14, The Wrap shared an exclusive Masked Singer promo video, giving the first look at six more of the costumes: The Ice Cream, The Tree, The Rottweiler, a spider, a rose, and a "green, furry creature." (Fox didn't disclose the latter three characters' official names.)

What might that mean as far as who may be wearing these elaborate looks? Jenny McCarthy, who will return with her complete Season 1 panel of fellow celebrity sleuths — Ken Jeong, Jenny McCarthy, Nicole Scherzinger, and Robin Thicke, along with host Nick Cannon — has offered some subtle teases. Previewing The Leopard's "Elizabethan-era" look, McCarthy emphasized that it is a "gender neutral" wild cat. "You won't know what sex this character is for probably a few weeks," she revealed to ET.

As for The Eagle, which is rocking some retro Western garb, McCarthy further hinted that this costume, in particular "is a good representative of the celebrity who is behind this mask." Hm...

The similarities are no mistake. The show's costume designer, Marina Toybina, told Deadline that she tried "to figure out how to match each character with the artists that were cast" during the creative process. "[The celebrity performers] were given a few sketches to kind of pick their own, and decide who they relate to, and then from there, it became a collaborative experience," said the four-time Emmy winner. "They explained to me [what resonated], and things that made sense right away, as to what gravitated their eye to the artwork. Then, once the costume was executed, I was able to really customize it for them—not just doing proper tailoring, but [putting in] special things that made the costume even that much more like an equal match, as to why they wanted to be behind that mask."

Some of the stars were more particular than others, of course. During the 2019 Television Critics Association press tour earlier this month, Fox Alternative Entertainment president Rob Wade explained to The Wrap how the "weird" Egg came about.

"There's different degrees of involvement from celebrities, so some celebrities are just, like, 'I wanna go on the show.' And you’re like, 'Well, you could be this, you could be that, you could be this.' And they'll go, 'Oh, I like that one,'" Wade explained. "But some, like Egg — Egg was like, 'I don’t like any of these. I want to be an Egg.' And we were like, 'OK… any reason?' And it's like, 'No.' (laughs)"

As for what the final two costumes might be, well, it's anyone guess? While Season 1 featured mostly animal-themed costumes, the appearance of an egg, ice cream, a skeleton, and a tree for Season 2 are wild cards that show how producers are really going to up the mystery ante.

More like this
Twitter Is Freaking Out Over Rihanna’s 2023 Super Bowl Halftime Show Announcement
By Stephanie Topacio Long
Kanye West Apologizes To Kim K "For Any Stress I Have Caused" In Rare Interview
By Jake Viswanath
Teresa Giudice Flipped A Table — Again —  On The 'DWTS' Season 31 Premiere
By Jake Viswanath
20 Years Later, Kelly Clarkson & 'American Idol' Judges Reunite For Her Hollywood Walk Of Fame Star
By Radhika Menon
Get Even More From Bustle — Sign Up For The Newsletter