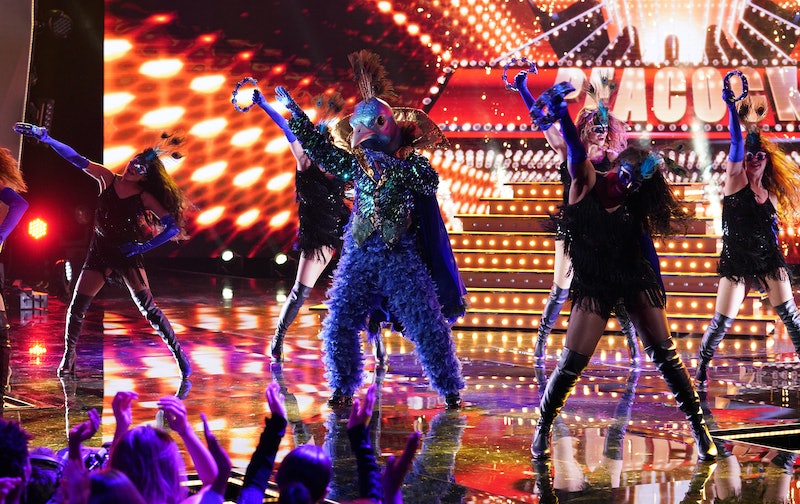 Fox's The Masked Singer started out as a strange, goofy, somewhat bizarre competition between celebrities. It's definitely still all those things, but now it's also a bona fide phenomenon. With the season finale airing Feb. 27, one costumed contestant will finally take home the Masked Singer prize. But what exactly do they win?

Well, right now it seems like it might just be bragging rights. According to USA Today, there's "no particular prize." Metro News echoed that sentiment, writing that "like most celebrity-based reality television, The Masked Singer doesn't boast a big prize at the end." And per the International Business Times, the main components of the show's prize are just bragging rights and a trophy.

While those may seem like pretty lackluster winnings against a reality TV landscape that frequently hands out record deals and hundreds of thousands of dollars, it makes sense for The Masked Singer. Each person behind the masks is a celebrity of some kind who presumably has plenty of money and opportunities, so it wouldn't make sense to give them even more. Some other celebrity competitions ask competitors to each choose a charity to compete on behalf of, and donate any winnings to, but that doesn't appear to be the case here.

The point of The Masked Singer is pretty obviously not for its contestants to duke it out for a bunch of cash. It's just about having fun — and perhaps there's no need for a prize at all.

The show is an Americanized version of a Korean series, Kind of Mask Singer, according to Vulture, and also has versions in other countries. It's an off-the-wall idea: celebrities obscure their identities behind elaborate, outrageous costumes while performing songs and occasionally dropping clues about who they are until someone guesses right, or they're eliminated. But somehow, it works, and even functions on some level as a deeper commentary about celebrity culture.

Vulture's Kathryn VanArendonk even wrote in the same piece that "The Masked Singer is absolutely imbecilic, except for the fact that it is also a pretty fascinating examination of celebrity culture, mass appeal, performance, image, and fame."

The has certainly had its fair share of critics, too, but even so, people can't seem to stop watching. As Vox's Todd VanDerWerff wrote:

"The Masked Singer is so ridiculous and so terrible that it wraps right back around to being one of the most compelling things on television. It's a reality singing competition that's barely interested in the words 'reality,' 'singing,' or 'competition.' It's an excuse for Hollywood to let its freak flag fly, but by 'Hollywood,' we mean, 'Z-list celebrities you might not have heard of.' And yet it's undeniably compelling and compulsively watchable in the way that reality shows that blow up in the ratings often are."

What's more, according to Esquire, The Masked Singer has yielded between 7 and 9 million viewers every single week right up until the end, which is definitely enough to qualify it as a hit.

Heading into the finale, there's still plenty of speculation about who's behind each remaining mask. Only time will tell who takes home this prize, but no matter what they win, this surprisingly successful show will be sticking around in our minds for some time to come.

More like this
Andy Cohen Apologized To Larsa Pippen After A 'RHOM' Season 5 Reunion Dust-Up
By Brad Witter
10 Photos Of The Wildest Limo Arrivals From 'The Bachelor' Premiere
By Brad Witter
Bachelor Zach’s “Dream Job” Has Nothing To Do With His Work In The Tech Industry
By Brad Witter
Yes, That's Christina From 'The Bachelor' In Taylor Swift's "Fifteen" Music Video
By Brad Witter
Get Even More From Bustle — Sign Up For The Newsletter
From hair trends to relationship advice, our daily newsletter has everything you need to sound like a person who’s on TikTok, even if you aren’t.