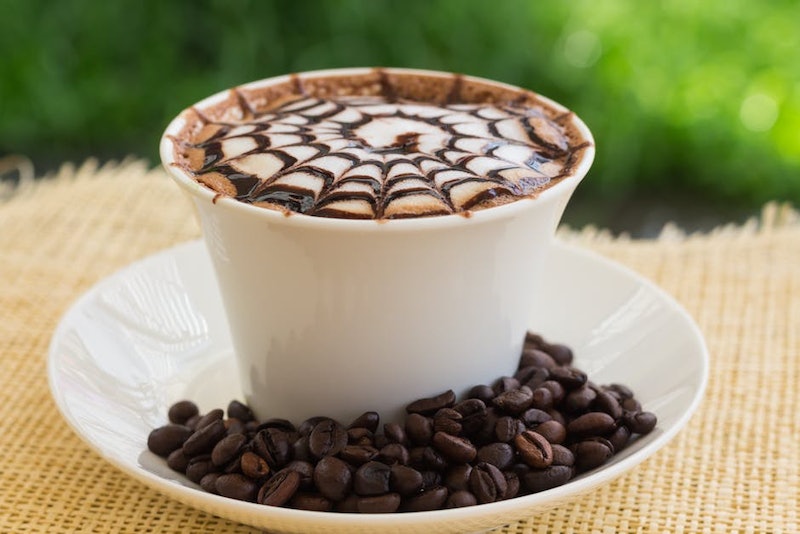 The gothic food craze hit the scene not too long ago, leaving many of us wondering what exactly black food tasted like and how bad it would stain your teeth. The next item in this crazy food trend has arrived: the matte black latte has come to New York City, and I'm guessing it's only a matter of time before other cafes catch on.

The matte black latte actually isn't totally new, but one cafe owner has made it with a twist. This particular version is the brainchild of Ockhyeon Byeon, the owner of Round K, a Korean style coffee shop in the Lower East Side. The drink is made from cacao powder, almond milk, and espresso. The biggest difference, however, is that it swaps in organic coconut ash instead of using activated charcoal, which is all the rage these days and the backbone of the black food trend. In this case, the coconut ash is what makes the latte black like the night.

Byeon's thirst for creativity doesn't end there, though. Round K also serves a wasabi latte and an egg cappuccino, which are both pretty much exactly what they sound like, made with wasabi paste and an egg, respectively.

Both sound a bit peculiar, but considering the popularity that Byeon's latte has been met with, it's not a far stretch to assume that his other concoctions are equally tasty and Instagram-worthy.

Byeon can certainly be credited with creating this dairy-free version with a special recipe; but crafty cafes and thirsty customers had already discovered the matte black latte. White Mojo in Australia came out with a black latte, as did Luxe Yoga Coffee Lounge. We've even discovered black hot dogs, black bagels made with squid ink, black rice sushi, black croissants, and black activated charcoal lemonade. Black ice cream popped up at Little Damage ice creamery in downtown LA, although Morgenstern's Finest Ice Cream caught on to this trend last summer.