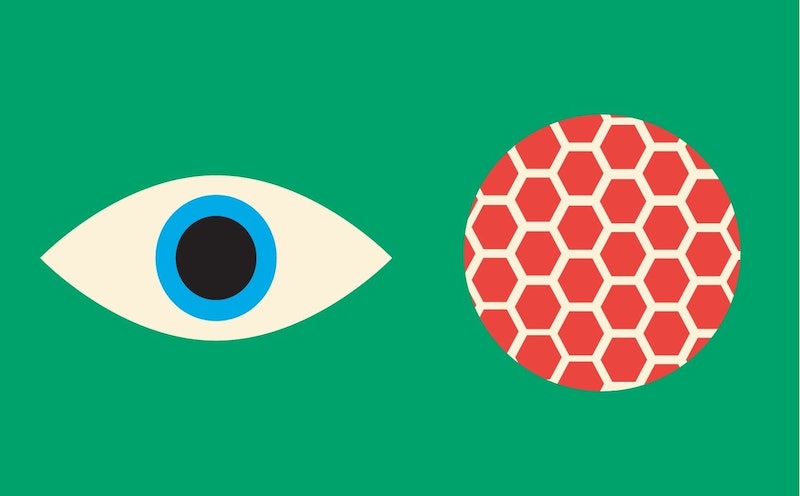 If you were to awake one morning and find yourself transformed into a giant insect, you might call the situation "Kafkaesque" (although it would probably be difficult for you to pronounce the word through your giant mandibles). You wouldn't be wrong, either —"Kafkaesque" simply means "in the manner of Franz Kafka." And author Franz Kafka did famously write the book Metamorphosis about a man who turns into a giant insect.

But, if you were to upload a PDF of your resume to an online job application, only to be asked to enter all of your work experience all over again on a separate form, you might also call that situation Kafkaesque. And you'd still be right, because the word is most commonly used to describe a situation that is nightmarishly, pointlessly bureaucratic.

That's not exactly the entirety of what "Kafkaesque" means either, though. Kafka's stories aren't just about annoying bureaucracy, they're about bureaucracy that is so soul-crushing and illogical that is goes well past tragedy and comes back around as comedy. In his writing, sea gods are too busy with paperwork to explore their own oceans, performers starve themselves to death in the name of art, and people are arrested with no cause and no recourse whatsoever.

Kafka biographer Frederick Karl was actually annoyed by the use of "Kafkaesque" as a synonym for "frustrating" or "bureaucratic." He argued that Kafkaesque goes quite a bit further than mere frustration:

"What’s Kafkaesque... is when you enter a surreal world in which all your control patterns, all your plans, the whole way in which you have configured your own behavior, begins to fall to pieces."

At the start of The Trial, bank cashier Josef K. is arrested for an unspecified crime, and must jump through a number of increasingly confusing bureaucratic hoops just to find his own trial, until he is finally executed without ever learning why he's been put in the situation in the first place.

Logic goes out the window in Kafka's writing. Or rather, the logic seems to be governed by some kind of snake-eats-tail, circular thinking. Arresting someone solely on charges of "resisting arrest," for example, would be classically Kafkaesque.

Karl's definition gets even more specific, though, because once you (the Kafka protagonist) are pulled into that surreal world, you're naturally going to try to fight back:

"You don't give up, you don't lie down and die. What you do is struggle against this with all of your equipment, with whatever you have. But of course you don’t stand a chance. That’s Kafkaesque."

So uploading and then re-entering your resume might be Kafkaesque in a general sense. But if you were to call up the company to complain about having to enter your resume twice, only to be redirected multiple times, visit various offices, wind up in court, and be executed for an unnamed crime, that would be truly Kafkaesque.

Writer Noah Tavlin goes a step further in what is swiftly becoming the Kafkaesque process of defining the word "Kafkaesque."

As Tavlin points out, when Gregor Samsa of The Metamorphosis awakens to find himself transformed into a giant insect, his first concern is getting to work on time. Of course, given the circumstances, he is unable to get to work at all. But this, too, is a theme in Kafka's work: when characters try to struggle against their surreal circumstances, they usually attempt to do so from within the system. Gregor is a giant cockroach, but he still wants to try and get to his office job. In the story Poseidon, the sea god is unable to explore his own realm because he's stuck at his desk doing paperwork—but he's only doing paperwork because he doesn't trust any of his subordinates to do so. He has assigned himself all these boring calculations.

Josef K. has been unfairly arrested, but even when supposedly powerful officials try to halt the momentum of his case, they are utterly unable to. No one seems to be making these laws, but everyone is obeying them.

Kafka's "due process" is always serpentine. Legal systems do not exist to serve justice, but to perpetuate themselves. In every circumstance, though, Kafka points out that we, the cogs in those machines, can be just as absurd and illogical as the machines themselves. Especially when we keep trying to fight the system with the system, following rules that make no sense to achieve goals we don't necessarily want.

Kafka laments and lambastes absurd bureaucracy in all his work. But he also invites us to notice the absurd part of everyday life and to laugh at it—lest we keep perpetuating the absurdity ourselves.

But "Kafkaesque" also means using circular logic to fight circular logic. And so the next time you are transformed into a giant insect, just remember that there are more important things in life than getting to work on time.

More like this
'The Sandman’s Ending Is A Departure From Neil Gaiman’s Comic Book Series
By Kadin Burnett
Candice Carty-Williams’ New BBC Drama Will Be “A Love Letter To Black British Music”
By L'Oréal Blackett and Sophie McEvoy
'Bridgerton’s Jonathan Bailey & Simone Ashley Just Teased A First Look Of “Kanthony” In Season 3
By Grace Wehniainen, Alyssa Lapid and Sam Ramsden
This Creepy TikTok Trend Encourages Out-Of-Body Experiences
By Kaitlyn Wylde
Get Even More From Bustle — Sign Up For The Newsletter