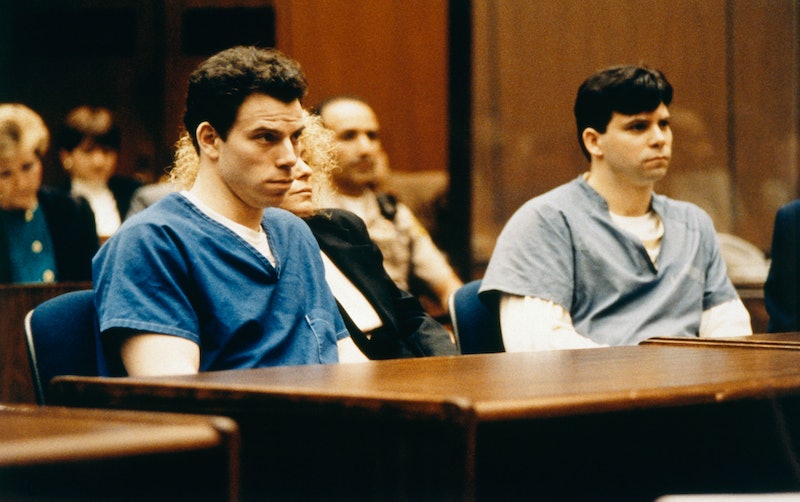 You may think that you've already learned everything there is to know about the infamous Menendez Murders after watching the first season of the new Law & Order spinoff, Law & Order True Crime: The Menendez Murders. But although this fictional series covered many of the events surrounding the crime and the eventual trial, it was still a scripted drama that was free to interpret some events as the writers saw fit. The new A&E documentary series, The Menendez Murders: Erik Tells All, (airing Thursdays at 10 p.m.) seeks to sort through the rumors and speculation regarding the case to get down to the facts (at least the facts as Erik sees them). And Erik Menendez himself will speak out regarding the murders, in the most in-depth interview he has given since the trial.

Erik and Lyle Menendez were the sons of Hollywood executive José Menendez and his wife, Kitty. On the outside, their lives seemed to be the epitome of wealth and privilege— until José and Kitty were discovered murdered in their Beverly Hills home on Aug. 20, 1989. Erik and Lyle claimed they had come home from the movies to find the bodies of their parents, but after the brothers spent between $500,000 and $700,000 immediately following their parents death, authorities began to suspect that they were somehow implicated in the murders, according to Rolling Stone.

Erik Menendez eventually confessed to the murders to Craig Cignarelli and later to psychologist L. Jerome Oziel. Recorded tapes of these therapy sessions revealed that both Menendez brothers admitted to killing their parents, per The New York Times, and helped lead to the brothers' eventual arrests. In the resulting highly publicized trial, the defense claimed that both Erik and Lyle had allegedly been molested and abused by their father for 12 years, and that Kitty had allegedly also molested Lyle for years, per The Los Angeles Times.

There are varying opinions on the veracity of their claims, per other family members. ABC News reported that Kitty's brother called the allegations "insanity." Meanwhile, the brothers' cousin Diane Vander Molen told ABC News she believed the accusations to be true, claiming that Lyle once allegedly said he was afraid his father would touch him while he slept. In the end, both brothers were convicted of first-degree murder and are currently serving life in prison without parole.

But now, Erik Menendez is ready to share his version of the events with the public. The new A&E docuseries will feature extensive phone interviews with Erik from prison, where he will discuss the crime, the trial, and his childhood. In a clip released by A&E about why he decided to speak out now, Erik said:

"My only hope in speaking out is that people may have a more complete understanding of the events that led up to my actions on the night of August 20th, and really a fuller picture of what really happened in my life. All I can hope for is that people will come to realize that the truth is not a simple, one-line explanation that many people have tried to make it out to be."

Whatever you might think about the case after watching the fictionalized portrayals released this year (Law & Order and the Lifetime movie Menendez: Blood Brothers), this series will give you the opportunity to hear directly from Erik, and others directly involved in the case, about what happened that August night. It's difficult to fully ascertain all the facts of the case from fictional dramas, especially one that admittedly "has an agenda," as Law & Order creator Dick Wolf told reporters at the Television Critics Association summer press tour, according to The Hollywood Reporter. Though it's likely that Erik might have an agenda of his own in deciding to be interviewed for a television series, at least audiences will be granted the opportunity to hear for themselves what Erik thinks and feels about the case, unscripted.

And the show won't just feature interviews with Erik. Rolling Stone reports that "the docuseries features never-before-seen photos and new interviews with prosecutors, law enforcement, close family, friends and medical experts, including former Los Angeles District Attorney Christopher Darden, former CNN host Larry King, and Erik’s wife Tammi Menendez." Viewers will be sure to get a presentation of the facts of the case that might have been overlooked, dramatized, or underplayed in any other fictional portrayal.

The interviews with Erik Menendez in The Menendez Murders: Erik Tells All are some of his longest and most in-depth quotes on the case in decades. So, even if you're burnt out on Menendez TV content, rest assured that this is one series that promises something new and definitely delivers.