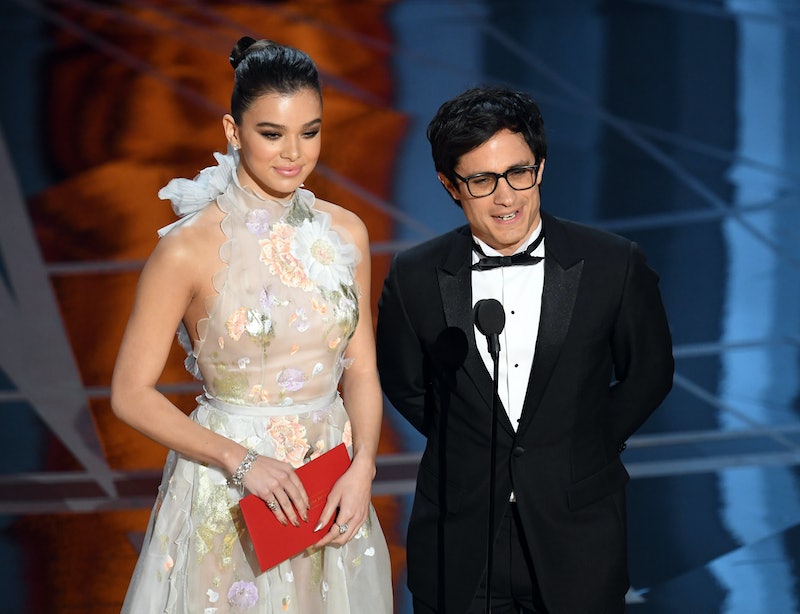 "You are part of a community that spans a century," Academy President Cheryl Boone Isaacs said on the stage of the 2017 Oscars. "Not just a Hollywood community or an American community, but a global one filled with storytellers domestic and international." The ability of art, and artists, to unite the world was a powerful point for her to make in our divisive political climate, but that point was even better illustrated by the victories of immigrants at the 2017 Oscars. Those victories, and the speeches that followed them, were so important for me to see — for every immigrant to see — now more than ever.

It's a hard time to be an immigrant who lives in America or is aspiring to. The president's refugee ban is preventing immigrants from seven Muslim-majority countries from entering the country. His executive order has launched construction of a wall between the United States and Mexico. His racist and xenophobic rhetoric, from the campaign trail to the White House, has made it clear that immigrants don't fit into his vision of making America great again. But for a night, at the Oscars, we got to see immigrants from many countries get recognition, and more importantly, get a space and a platform to speak about their own experiences. That's the kind of basic respect that many immigrants are denied by our current political climate.

As an entertainment journalist who is a woman, an immigrant, and a person of color, I often find myself writing about injustice and (a lack of) representation. I don't get the luxury of seeing stories that speak to my experience as often as white people do, and, when I do get them, I don't get the luxury of knowing that those stories are being told by people who share my experience. So it's hard for me to truly believe the words when Boone Isaacs stands on a stage in front of the Hollywood elite and says,

...the movies we love, the ones that truly matter regardless of country of origin, all speak to the human condition and the values, sorrows, joys, and passions that we all share.

Because, usually, that human condition, those values, those sorrows, those joys, and those passions aren't by people like me or for people like me. When I watch an awards show — especially the Oscars — I'm often reminded of the moment when I had to tell my younger sister that, no matter what she wanted to do in her future, she would have to work 10 times as hard for half the respect that any white person would get in her place. I'm often reminded of the moment that I learned that, despite my parents bringing me here from Jamaica when I was 5-years-old so that I could have a better life, that life would be a struggle for me every day because of the color of my skin or my gender or where I was born.

But on Sunday night, immigrant actors, directors, and screenwriters took to that stage to speak to the human condition, to remind those who had forgotten that we are human, that we deserve to be seen, to be heard, and to be recognized for our accomplishments.

Like when presenter Gael García Bernal expertly slammed Trump's divisive policies while emphasizing his own heritage: "As a Mexican, as a Latin-American, as a migrant worker, as a human being, I’m against any form of wall that wants to separate us." Or when winner Asghar Farhadi — who did not come to the Oscars in protest of Trump's refugee ban — prepared a powerful statement, read by Anousheh Ansari:

My absence is out of respect for the people of my country, and those of [the] other six nations who have been disrespected by the inhumane law that bans entry of immigrants to the U.S. Dividing the world into the 'us' and 'our enemies' categories creates fear — a deceitful justification for aggression and war.

Or even simply when Alessandro Bertolazzi accepted an Oscar for Makeup & Styling for Suicide Squad and said, "I'm an immigrant. I come from Italy. I work around the world. And this is for all the immigrants."

It truly did feel like the Oscars was a night for all the immigrants, and not because the ceremony itself did anything new or special. Instead, it was because the immigrants who won took time during their speech to speak not to their Hollywood compatriots but to their fellow immigrants — to me. They took the time to reassure me that I am not alone, that they see me, that they are fighting for me as I fight for them. They took the time to celebrate being recognized for their talents, while also reminding the world that that recognition is nothing in the face of what really matters: respect. And, because of that, they made the 2017 Oscars more inclusive than America as a whole seems to be right now.