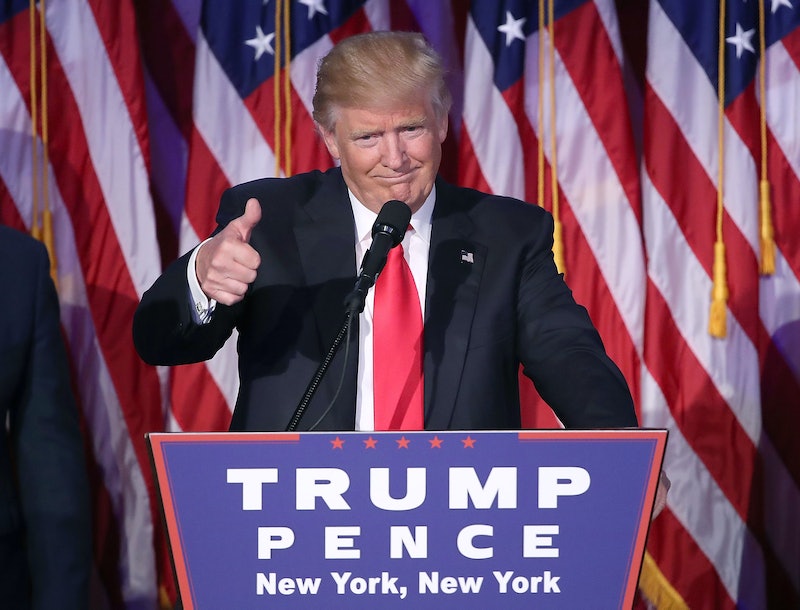 “Fighting for what is right is worth it,” said President Barack Obama during his post-election address at the White House’s Rose Garden on Wednesday. He was reiterating the words once said by Hillary Clinton in his speech. These words stuck with me as I spent the day processing the great unknown that's our country right now. I couldn’t sleep Tuesday night after Hillary Clinton conceded to President-elect Donald Trump — a title that feels weird even to voice. President. Elect. Donald. Trump. I said that out loud, and there is a stillness of not understanding the current state of America ringing loudly in the four walls of my apartment. In the past, I’ve thought about the potential of the country I've grown up with and compared it to the positive force of change that so many young millennials wish to see. But a lot of my vision was halted Tuesday night because I saw the evidence of what I’ve always felt: a nation divided.

It’s hard to have faith in a place that now feels so foreign to me, as if I have become an immigrant in a country I was born in. In truth, I am a product of Black immigrants. My parents came to the U.S. from Nigeria in the mid-'80s hoping to establish a new and better life here. Both of my parents were the first of their siblings to actually move outside of Nigeria. They knew that leaving their homes would give them the opportunity to raise their children in a country that provide endless opportunities. After many years, my parents worked hard and received their U.S. citizenships. But what about my family still in Nigeria? Or for those who have parents who've been here without citizenships? Right now, I feel an anxiety when thinking about immigration and race relations in America, and it's all due to Trump and his followers.

“Restore integrity to our immigration system by prioritizing the interests of Americans first. Enforce our immigration laws — at the border and at the workplace. Build a border wall and end sanctuary cities. Send criminal aliens home. Welcome those who embrace our way of life, but keep out immigrants and refugees who don’t through rigorous vetting,” said Trump in mid-September at an event. Hearing rhetoric like that, images of families being torn apart appear in my mind, and I can’t help but weep thinking about the inevitability that may come without the union of our country's people. Immigrants come from all over (the general public seems to focus on immigration from Mexico, but so many people — like my parents did — arrive from overseas), and to think that we have a president-elect who dismisses them as criminals and wants to deport them all is terrifying.

And it's not all. Trump has also promised to triple the number of U.S. Immigration and Customs Enforcement agents under his presidency. Federal officials would select immigrants “based on their likelihood of success in the U.S. and their ability to be financially self-sufficient,” he said during a campaign speech in Phoenix in late August. “Zero tolerance for criminal aliens. Zero. Zero."

Several times in my life, I’ve heard people tell my parents or me, “Go back to Africa," or: “They should ship you on the boat your parents came on,” or: “Learn how to speak English.” They refuse to understand who my parents are or who I am, and as a kid, I felt distant from America when I heard hateful phrases like these, ones that criticize my family for our Nigerian names and culture. I often found myself out of place with White kids in school. They didn’t understand much about African-American culture, so it was even harder for them to know about my Nigerian culture.

Being Nigerian is reflected in me everyday. When I look into the mirror I see my culture and I have a sense of where my history comes from. As an adult, I don’t question the presence of my self-worth, but now, with Trump elected, the question of how criminally Black and immigrant my family might seem to some is more dangerous than ever. To have a leader who encourages hatred through separation in religion, race relations and natural origin is heartbreaking, and all too real to me.

Regardless of where we come from, we all have similar struggles and cultural foundations that tie us all together. But the separation of mentalities about who belongs in America is dividing us all. Like most immigrants, the U.S. is a beacon of light and a place where many aspire to have a better life and the freedom to live without unmovable caste systems or restraints on aspirational growth. But what have we become now that a leader of the “free world” is showing the ugly head of racism and immigration laws that will make America a place of discrimination?

Now more than ever, the work has to be done to keep America from indulging in a hateful mentality that will continue to cause a great divide. As Deepak Chopra once said, “All great changes are preceded by chaos.” I will continue to keep that in my mind, as I seek and fight for change in this country. I’m fighting for my family, my future husband and children, and my society to become better and act on change. Yes, we will have a new president come 2017, but we, right now, are the stakeholders for change, and I won’t go down without a fight.