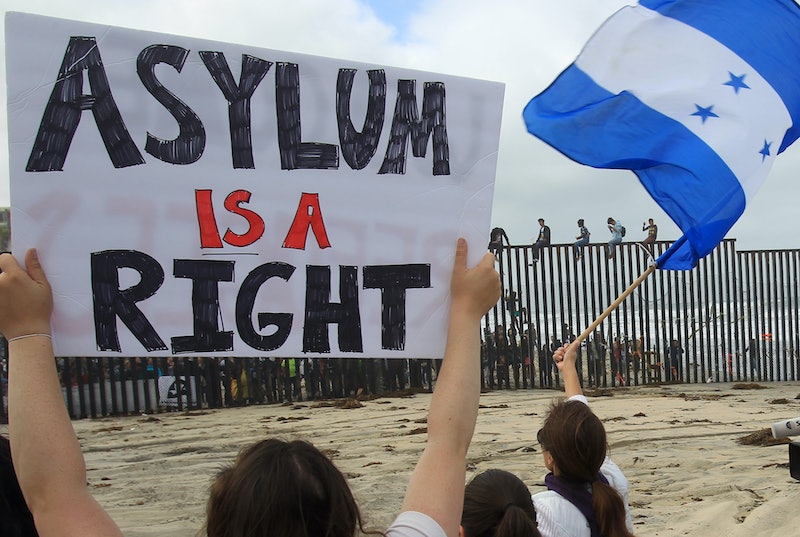 Two U.S. representatives camped out at the border Monday night with a group of refugees — all in order to make sure that border guards heard their asylum claims and did not turn them away. Among those processed first was a Honduran mom and her children who were featured in a viral photo taken at the border this year. The migrant mom and kids from the tear gas photo have now applied for asylum and are in the United States.

The news was shared by Rep. Jimmy Gomez (D-Calif.) on Twitter and was confirmed to NBC News by an immigration attorney. "After 7hrs, I can now confirm: Maria Meza & her kids — featured in this @Reuters image fleeing tear gas at the border last month — just filed for asylum. They’re on American soil," Gomez posted with the iconic picture.

People traveling from Central America have had a hard time seeking asylum at official ports of entry into the United States the past few months. In the middle of many bridges to the United States, American immigration officers have been stopping asylum seekers so they're unable to reach American soil and apply for asylum, as The Los Angeles Times reports.

In California, agents have said they are at capacity and can't process more claims. Customs and Border Patrol agents tried to use the argument that they were at capacity for processing claims of fear (the technical term at this stage of the asylum process) on Monday night, as seen in Twitter videos. Agents also gave this explanation to Gomez, who was accompanying the migrants with Rep. Nanette Barragán (D-Calif.) and other asylum advocates.

The reasoning went out on social media, too. "With the influx of Central American family units arriving at US ports of entry without proper documentation and crossing US borders illegally, the processing system at CBP and our partner agencies has hit capacity," the agency tweeted Monday night.

All of a sudden, Meza and her family were let in and processed. "It all happened quickly, but I can report her kids were delighted to learn they were finally going to be processed and not be waiting outside in the cold," Christina Brown, an immigration attorney who was present, told NBC News on Tuesday.

Meza reportedly had it relatively easy as they crossed the border. She and her kids had to wait just seven hours with Gomez, Barragán, and other asylum advocates. Other migrants who joined them had a much more difficult time, as many were unaccompanied children who were hoping to have their asylum claims heard before their 18th birthdays, when they would face more difficulty, NBC News reports.

Barragán questioned the capacity excuse on Twitter. "CBP still refusing to show us inside the Otay Mesa facility," she wrote. "We would love to see the full capacity they keep citing." Long after dark, the group was fenced in by CBP officers with little sign of being let in.

"Seeing Maria and her family finally be taken inside for processing has been the most satisfying of the last 13 hours," Barragán wrote on Twitter late Monday night. It took hours more, though, for the entire group to be processed.

Meza's relatively quick processing (it was a seven-hour wait) is far from the norm, advocates point out, as most asylum seekers don't have members of Congress accompanying them through the border.