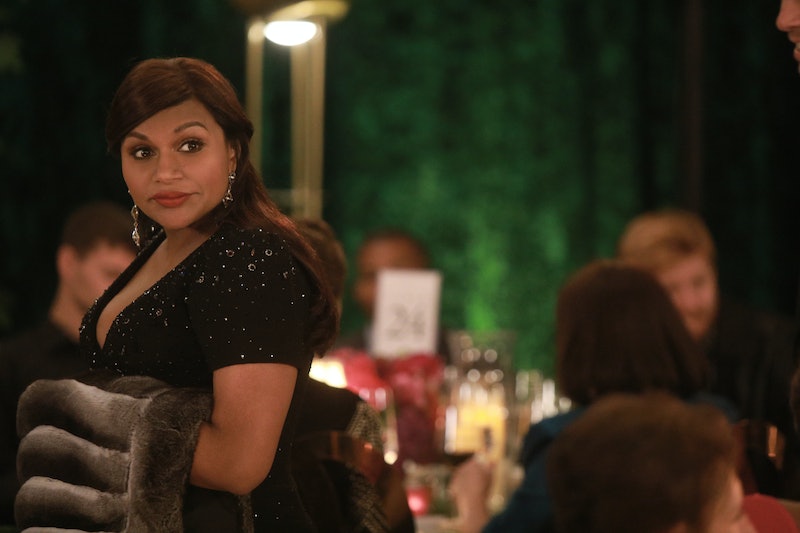 Spoilers ahead for the series finale of The Mindy Project. After six seasons of will they or won't they, whether or not Mindy and Danny would end up together was the question on everyone's mind before The Mindy Project series finale. Of course, the final episode of the series ends with Mindy (Mindy Kaling) and Danny (Chris Messina) realizing they're meant to be together. This was always a rom-com, so happily ever after was the only way it could end. But what became clear in its final episode is that The Mindy Project was really an homage to When Harry Met Sally, a rom-com that felt more like real life than a movie.

The signs were right in front of us. From the very beginning, Kaling and her writers included When Harry Met Sally Easter eggs. They would usually pop up in episodes that focused on Mindy and Danny's relationship, like the back-to-back Season 1 episodes titled "Harry & Sally" and "Harry & Mindy." The first episode tackles the idea that Mindy's new Latin professor beau (B.J. Novak) is her "Harry," the one she's meant to be with despite how different they are. But then she realizes he has a female friend who is clearly his "Sally." Mindy's not the star of this rom-com she's created; instead she's a supporting player in someone else's obvious love story.

What becomes obvious, though, is that this is beginning Mindy's ownWhen Harry Met Sally love story. It's those two episodes in which Mindy and Danny stop their bickering long enough for the audience to realize there's something more there, even if these two don't see it yet. Though, let's be honest, Mindy should have known since When Harry Met Sally is her favorite movie.

As a sign of how close these two are getting, though, Harry (Billy Crystal) and Sally (Meg Ryan) return in the Season 2 finale. Danny comes over to take care of a sick-in-bed Mindy and decides he'll watch the film, which he prefers to callWhen Doofus Met Dummy. He even ends up putting his own twist on the movie's most famous line: "I'll have what she's having." His is, "I’ll order whatever’s giving her an orgasm,' and it's one of the best jokes The Mindy Project ever told.

But that moment in an episode called "Danny & Mindy" points out how these two have grown to understand one another, even if they don't understand what is happening between them. It's classic When Harry Met Sally: Just when these two decide to be friends, they now have to ask themselves, "But wait, can we be?" The answer was no, which is why, at the end of that episode, Danny is running just like Harry did to find the woman he loves and finally tell her how he feels.

And no one should be surprised to see that title of The Mindy Project series finale is "It Had To Be You," a nod to the song that plays throughout When Harry Met Sally. We knew all along that there was something special about Mindy and Danny's relationship. Just consider the way that, even after they broke up, they somehow came back together to take care of their son Leo or become the support system for Danny's mom after her cancer diagnosis.

In the end, both Mindy and Danny get to be the "Harry" who realizes that this longtime friendship will always be something more. But, while it's romantic, this isn't a fairytale ending, it's something more realistic. It took years of ups and downs for them to get to this point. In fact, it echoes what Harry and Sally say at the end of the movie as they reminisce about how they fell in love: "We became friends. We were friends for a long time. Then we weren't. And then we fell in love."

In the end, it wasn't a husband Mindy was after; she needed a partner. By investing in her fertility business, Danny made it clear that's what he wanted to be. He wasn't looking to save her, which is what Mindy may have wanted in the past before the handful of failed relationships and a quick marriage. Instead, Danny just wanted to help her be the person she wanted to be, which is what she really needed.

In their final scene, Mindy and Danny lay it out on the line, with her telling him she never stopped loving him and probably never would. They bicker about cupcake shops and hyphenated last names, but the final shot is just the two of them sitting together on a couch watching TV. Those over-the-top gestures are nice, but this is the real story of how they fell in love.

It took six seasons in which they were friends and then they weren't and then they fell in love, but in the end, Mindy found the Harry to her Sally. And, honestly, what's more romantic than that?