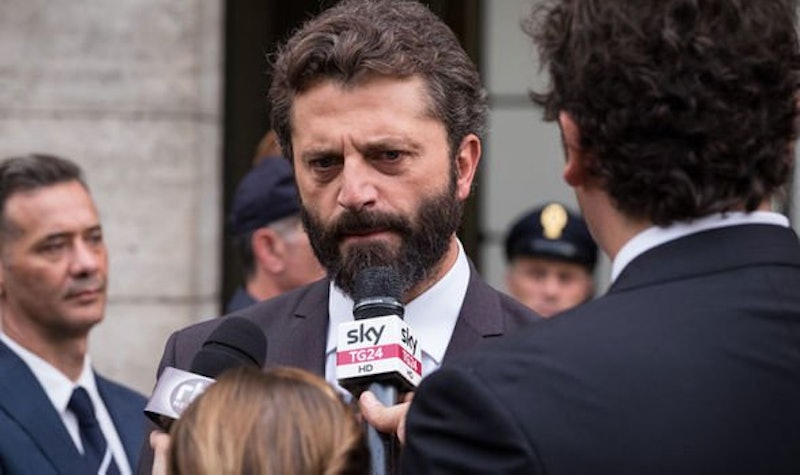 Thrilling, mystery led drama is filled with good guys, bad guys, kind of in the middle guys, and of course guys who fool you. Basically a whole load of people you do not want to get stuck next to on a flight or any sort of situation really. Y'all know the second you see the words "mystery" and "drama" in the same description, it is about to be violent AF and those with a distaste gore best look away. But, what if the blood wasn't quite where you expected it to be from? New show The Miracle on Sky Atlantic is an entirely different type of drama and y'all, it is about to be lit.

During a police hit on a mafia hideout, the fuzz find a Virgin Mary sculpture that is crying blood. Anyone familiar with Catholicism knows that this is a pretty big deal in our brand of religion. This miraculous occurrence sets in motion a whole load of wild stuff that changes the religious and political leaders of Italy forever.

The show is written by Italian writer Niccolò Ammaniti, who is much beloved and well known as a successful novelist. It is of course, made in Italian with English subtitles so not only is this show some excellent entertainment but also an opportunity to brush up on your non-existent Italian.

The show, which is kicking off over on Sky Atlantic Feb. 26, is in eight parts. In the first episode, a suspect is found covered in blood in a scene that you would expect to be relating to a whole bunch of violence and murder. However, as mentioned, the blood is in fact flowing from the eyes of a plastic figurine of the mother of Christ, the Virgin Mary. The blood, which is confirmed to be human, has huge resonance in the largely Catholic Italian society. It seems that there is a lot more to this bleeding statue than hoax or strange phenomenon, and the impact of the statuette is pretty damn enormous.

Blood and Christianity are intrinsically linked and anyone who has been to mass can tell you, they talk about it a whole bunch. The show, which is produced by Sky Italia, plays on the idea of the crying Madonna and its history. Chief of content for Sky Italia Andrea Scrosati explained the relevance of the weeping Madonna in his native Italy when he spoke to Variety:

"There have been a lot of crying Madonnas in Italy. If you go to the place, everybody will tell you it's true, but in their heart they know it's not. But what happens if it's actually true?"

How the powers that be actually behave in light of this turning out to be true proves to be far from what one might expect and viewers are left wondering: is a miracle necessarily a positive thing?

"How would politicians react to this? How would the church react to this?… There is obviously money involved. And the characters that interact with this event, their lives are completely affected in ways that you would not expect".

The mystery will have you gripped from start to finish and if that isn't enough, the beautiful visuals will completely steal you heart and have you weeping. Hopefully not tears of blood.

Watch The Miracle on Sky Atlantic February 26th at 9p.m.