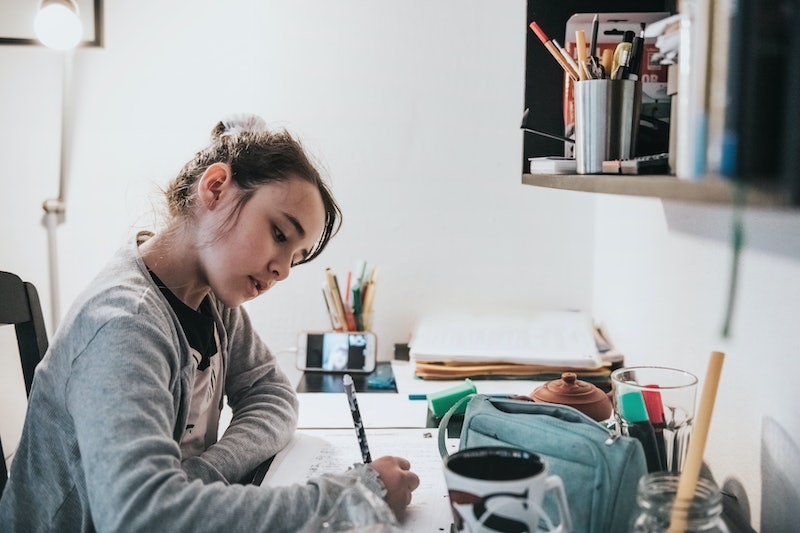 All those years of conjugations and vocabulary cards may have paid off in ways you didn't realize. Yet another study — a collaboration between researchers at the Higher School of Economics and the University of Helsinki — has found that learning a new language makes you smarter, or is at least associated with processing certain information faster. It looks like all those original Rumi texts you carried around to look impressive in college actually were impressive, provided you actually read them.

In the relatively small study published in Scientific Reports, electroencephalography (EEG) was used to measure the brain activity of 22 university students, none of whom were early bilinguals, while they listened to recordings of words in different languages. According to researchers, "formation of new word memory traces is reflected in a neurophysiological response increase" — in other words, participants showed a change in brain activity when they encountered new words. The quicker that brain activity returned to normal levels, the faster the participant was considered to have "processed" the new word. (Language is far more complicated than such simple logic implies, but different brain patterns have been linked to ease of language acquisition in the past.) Afterward, researchers compared participants' brain activity to factors like the number of languages they spoke and the age at which they learned them.

The results? People who knew more than one language showed more brain activity when confronted with a new word, and according to Science Daily, those who knew more languages processed the information more quickly.

The study is based on correlations, so it can't quite claim that learning a language makes you smarter; furthermore, intelligence is just about as complicated as language itself. On the other hand, there's an entire existing body of research indicating that language is related to cognition. Earlier this year, a study found that bilingual babies have higher-functioning brains than the ones raised in a single-language household, and knowing more than one language is also correlated with higher levels of empathy. In 2011, Pennsylvania State University researchers suggested that bilingual people are better at multi-tasking and other activities that require "mental juggling," possibly because they're already used to switching between languages. Even if you're already a genius with no interest in becoming smarter, there's evidence that bilingualism delays the onset of dementia and Alzheimer's disease.

Besides, everyone knows that speaking another language is the best form of seduction. What have you got to lose?

More like this
This Psychological Effect Might Be Keeping You From Hitting Your Goals
By Lexi Inks
5 Ways To Help People Impacted By Hurricane Ian In Cuba & Florida
By Emma Carey
26 Ghost Story Podcasts To Get You Ready For Halloween
By Jessica Booth, Mia Mercado, JR Thorpe and Emma Carey
20 Smart Devices Under $35 That’ll Change The Entire Vibe Of Your Home
By Emma Carey
Get Even More From Bustle — Sign Up For The Newsletter