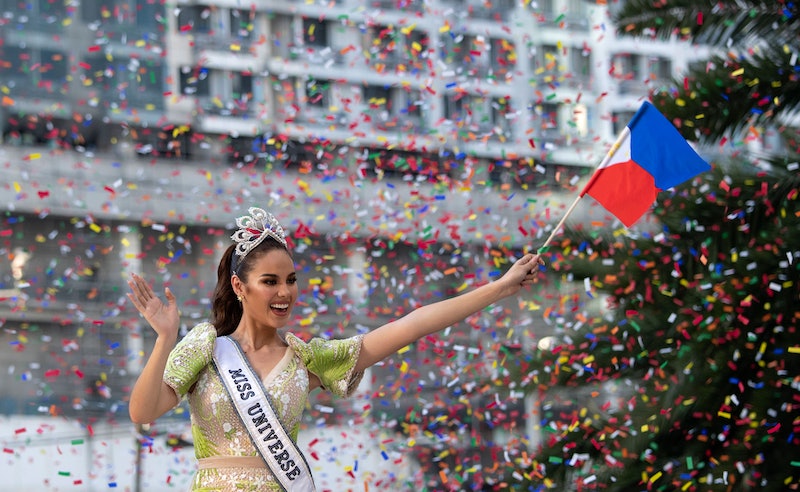 In 2015, Business Insider reported on what the Miss Universe winner gets — and it's a lot. To start, she gets to move to New York City where she'll be housed for free. She'll also receive a salary for a year. There's no word on what that salary is, but Bustle previously reported that the Miss America salary is six figures, so it's probably comparable. The Miss Universe winner will also have access to exclusive events, parties, screenings, and more. Plus, the prize package includes shoes, clothing, jewelry, hair products, and skincare items provided by the organization's various sponsors. Intangible items include dermatology services, professional representation, and professional wardrobe and styling for appearances.

This year Miss Universe is sponsored by fashion designer Sherri Hill, Chi Haircare, OP Makeup, and Olivia Quido Skin Care. The 2019 prize package likely includes products from those brands. In the past, the winner also received a real fur coat, a prize item that made pageant host Bob Barker quit in 1988. He's a noted animal rights activist and refused to be part of Miss Universe so long as that was part of the prize package. Presumably it's been removed since the '80s, as it was not mentioned as part of the package by Business Insider and today's fashion climate is not very fur-friendly.

In addition to the material items winners get, they also get the opportunity to use their platform to help causes close to their hearts. This is the aspect of the pageant that the organization touts online, writing that the Miss Universe contestants help "effect positive change personally, professionally and philanthropically as inspirational leaders and role models."

And that's not just something that the ultimate winner gets. The public platform that all of the Miss Universe contestants have provides them all with the opportunity to effect change and raise awareness for charitable causes that they care about. The organization also says that being on Miss Universe helps set women up to chase their career goals via the connections they can make in the pageant and as a result of being on it. Former Miss Universe contestants have gone on to work in "government, business, finance, broadcasting, as well as film and television," according to the organization's website.

Last year's winner, Catriona Gray, was from the Philippines and she focused her platform on proper schooling for children and HIV/AIDS awareness, prevention, and treatment. In that way, not only does Miss Universe get a lot of cool swag, but her community and country get to have a yearlong advocate to help with some important issues. It's a win-win.