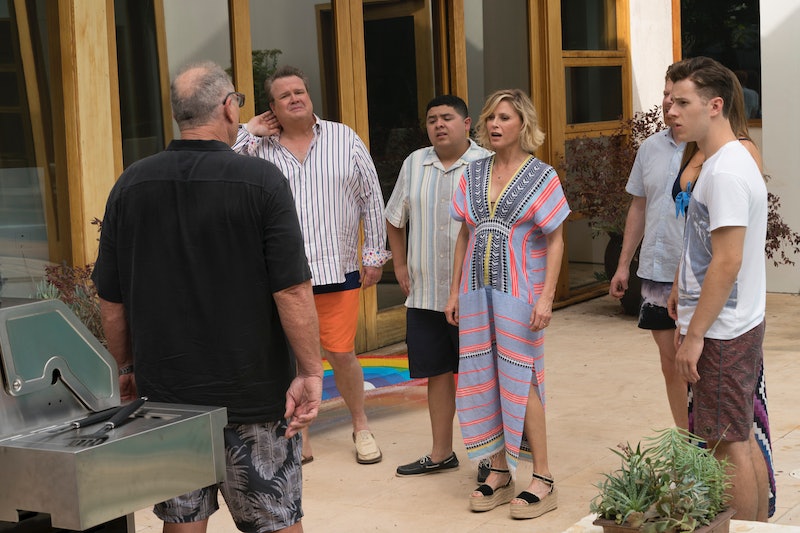 Major cast members die on television shows all the time (everyone has a list of the characters they’re still mad were killed off), but it’s not that common for a major cast member from a long-running sitcom to kick the bucket. Deaths can be a good thing for a show, as they reinvigorate the storytelling and the cast, and that’s the path that Modern Family is headed down right about now. The show has been teasing the passing of one of its Pritchett/Dunphy/Tucker own since the beginning of Season 10, and it's finally been revealed — Mitchell and Claire's mom Dede died on Modern Family, peacefully in her sleep while on a trip with her women's group. But not before taking on a pack of wolves, slipping into a frozen lake, and antagonizing the group's hosts — this is Dede, played by Shelley Long, after all. The woman was a real pain in the you-know-what.

It was particularly sad because the Halloween episodes of Modern Family are always fun episodes — the first one, where Claire enlists her family to make a haunted house within the Dunphy house is a classic, and it really set the tone for the Halloween episodes to come. It’s like The Simpsons, but, you know, not animated. That’s why Dede's death during such an episode particularly stings.

It started out like a Modern Family Halloween episode always does — Claire masterminding an unforgettable Halloween display, and Phil bumbling along. But Dede's husband, Jerry, phoned the whole family — even ex-husband Jay — right before the Halloween festivities, changing everything.

For a sitcom, Modern Family used this half-hour episode to explore some serious emotional depths. Mitchell and Claire had, as Cam put it, complicated feelings about the woman they had the most complicated relationship with of all, with Mitchell wanting to deify his mother while Claire couldn't help but remember the time that Dede told her she "ate ice cream like a prostitute." And while those memories may not be the best ones to bring up, Claire had a point in saying that yes, their mother is dead, but she was a real human person with flaws.

Cam and Phil tried to play the part of supportive spouses but mostly stayed out of the way of Mitchell and Claire because, well, they're Claire and Mitchell. The two men ended up eating ice cream while stuck in traffic together in the car because they went out to get a batch from an ice cream shop that had meant something to Mitchell and his mother. The grandkids had all sorts of reactions: Ate their feelings (Haley), did nothing at all (Luke), had sex (Alex), and messed with Gloria by way of a little statue of Dede (Lily); and Jay, well, Jay pretended to be sad about a sandwich when he was really sad about the passing of his ex-wife. It sounds silly, but it was actually really poignant in the way that only a sitcom like Modern Family can be.

One thing that Modern Family has always been good at is showing that life is more complicated than it seems, and you just have to go along with it. Everyone grieved Dede in a different way, and that grief may manifest itself in a new way hour by hour, day by day. For now, the Modern Family crew is processing Dede's death, and no matter what happens, they'll be there to help each other get through it.