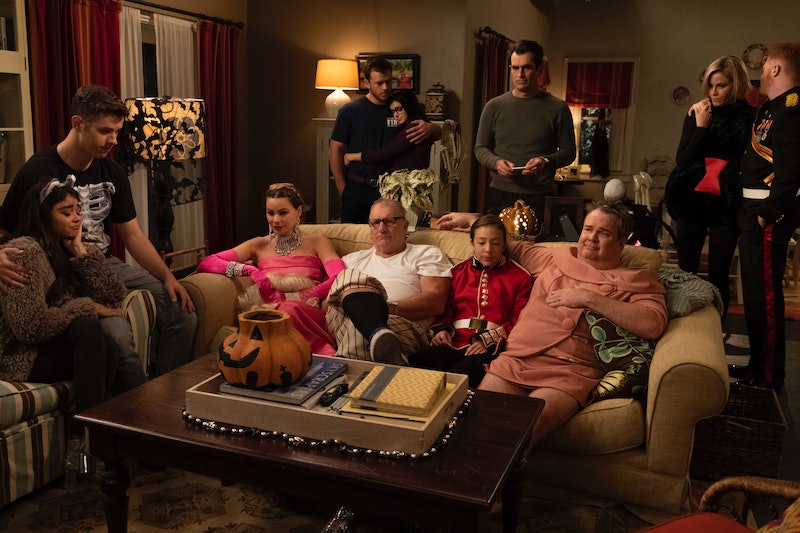 Creators of the hit show Modern Family shared at the beginning of Season 10 that a major character would die. It was to be the first major death and experience with grief explored on the show. And after much anticipation, guessing, and morbid excitement, the Modern Family death finally took place in the series' annual Halloween episode, and, as strange as it is, many fans were left feeling disappointed. Spoilers ahead for episode 5, Season 10 of Modern Family.

The fifth episode of this season, titled "Good Grief," started with Claire dressed up as a spider and Phil dressed up as a fly — the cutest couple costume made even better on the Dunphy's. As Phil is getting stuck in a web, Claire receives a call from her mom's husband who drops the bomb that her mom, DeDe, is dead.

DeDe, played by Shelley Long, has appeared on a total of eight episodes of Modern Family, including this one, since Season 1. So while she may be a "significant" character in the lives of those on the show, she wasn't so meaningful to fans, who had been promised that the death would be that of a major character. Leading up to the episode, many viewers had been guessing the major death was going to be one of the core actors on the show, especially considering Ariel Winters' comments. She recently teased, "[The death] it's probably not an older character that you think is going to go," which fans thought meant Jay and DeDe were safe from death. So you'd understand why some were kind of peeved, and you'd also understand why they weren't shy about taking their frustrations out on Twitter.

On the other hand, some fans were just relieved that Jay and Stella were safe from death.

DeDe was an entertaining character to have on the show, and she blessed everyone with her tough love and snarky comments. And her death allowed Modern Family to portray how people grieve in their own, unique ways. Every member of the Dunphy-Pritchett-Tucker family dealt with DeDe's death a bit differently. Haley couldn't stop eating, Luke made silly jokes, and Alex immediately focused on having a proper, respectful response only to then succumb to her grief. Meanwhile, her children Claire and Mitchell took it especially hard.

In an interview with Entertainment Weekly, co-creator Steve Levitan touched on why DeDe's death made for compelling television, specifically with regards to her complex relationship with her children. "Whenever people have any kind of a complicated relationship with somebody, and then they die, it brings up a lot of things," he said. "So when we were talking at the beginning of the season about some different places to go, this idea came up, and we liked it." He also said that the characters, specifically Jay, Claire, and Mitchell, are going to deal with this in at least one more episode, where they will "deal with ramifications" of it all.

Now that the mystery of who'd be killed off has come to pass, viewers can expect the coming episodes to explore the family's reactions to DeDe's death. Meanwhile, just because they weren't killed this time doesn't mean Jay and Stella are safe. With possibly only one more season left, who knows what Modern Family could have in store.