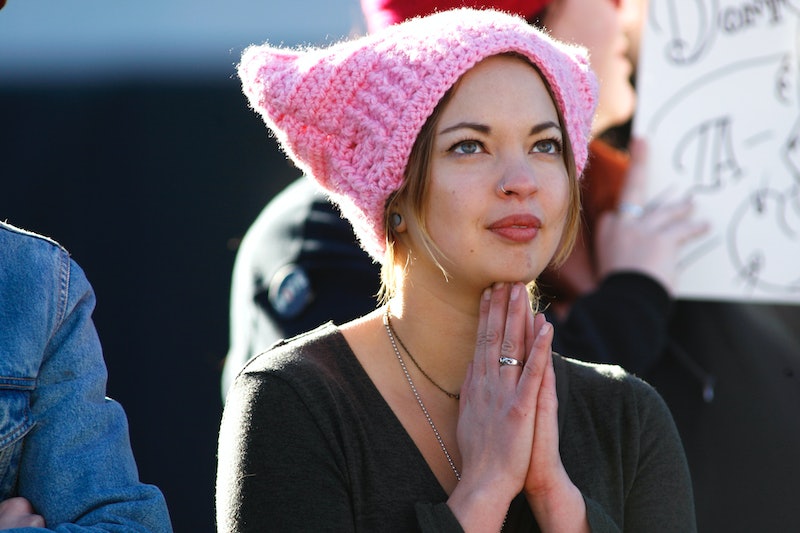 For over 70 years, Gallup has conducted a poll to determine the most admired women and men in the United States. Hillary Clinton has topped the former list for the last 16 years in a row, but that changed this time. Gallup's 2018 survey, which was conducted earlier this month, shows that the new woman Americans most admire is Michelle Obama.

Last year it was a near tie between Obama and Clinton, with the former receiving 7 percent of the vote and the latter, 9. But this year Obama easily emerged at the front of the pack with 15 percent (Oprah came in second with 5; Clinton and Melania Trump both received 4 percent). The trends were divided along partisan lines: Democrats tended to vote for the Obamas, while Republicans generally voted for the Trumps. Normally the sitting president tops the male list, but President Barack Obama beat President Donald Trump both this year and last.

Noting in its press release that 2018 has been a big year for Obama — she released her memoir Becoming in November and it became 2018's best-selling book — Gallup suggests that its poll results are tied to women's visibility. ("Hillary Clinton [is] falling back now that she has more fully retreated to private life," it explains.)

Obama is also in the middle of a lengthy book tour that's taking her across the country, from Florida to Arizona to Washington. She's even hitting a few places abroad, in Europe and Canada. The tour was originally supposed to include 10 locations, but she ended up extending it to 21 cities after the tour's success became evident.

According to the long-term trends Gallup noted along with its survey results, Obama has been on the list of most admired women since at least 2008, and she's come in second several times but never ranked first until now. Other women near the top of the list included Queen Elizabeth, Angela Merkel, Ruth Bader Ginsburg, and Ellen DeGeneres.

Poll respondents are not given a list of potential candidates to choose from, Gallup tells Bustle. Instead, the company leaves the question open-ended and allows people to choose a first and second preference, which are then combined and ranked. "We do not tell them about previous winners, as it has the potential to bias their response," Gallup's Jennifer Donegan tells Bustle. Many people pick their friends and relatives.

The Obamas are a particularly striking power couple in 2018, simultaneously topping the lists. President Obama — with 19 percent — received an even higher share of the vote than his wife. President Trump followed with 13 percent. Other men mentioned included President George W. Bush, Pope Francis, Bill Gates, and Bernie Sanders.

Obama is clearly a role model for many women — and she uses that power in part to speak about women's issues. She's often raised the topic of sexism during her Becoming book tour.

"The world is unsafe for women," she told the audience in New York City, "and I want our men to understand that about what role they're playing to make us feel safe or unsafe." She's also disputed the idea that women can "have it all" if they just try hard enough, declaring, "that ... sh*t doesn't always work!" Obama's tour will continue until May, and tickets are currently on sale on her book website.