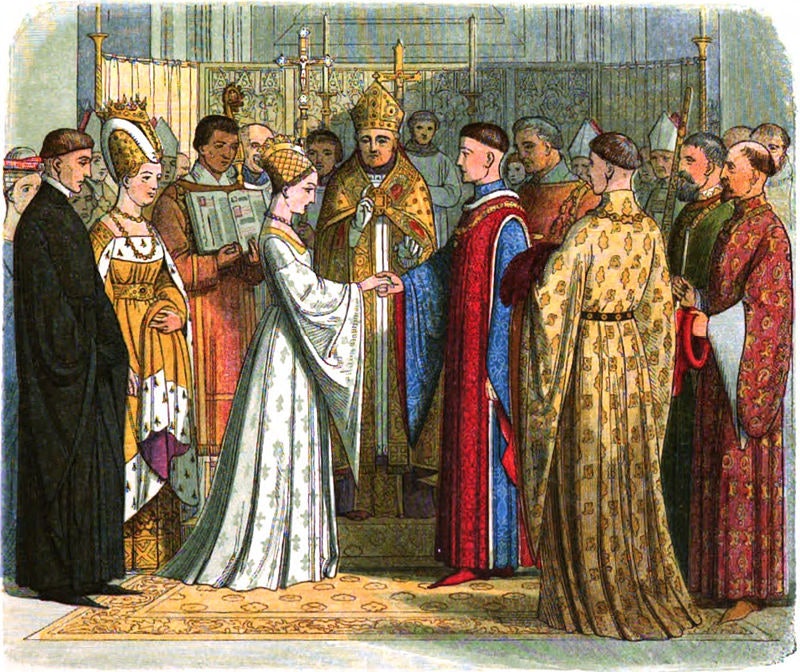 With Planned Parenthood funding under the new American government on the verge of crisis and deep worries about the impact of a Republican nominee for the Supreme Court, it's prime time for people in America to worry intensely about sexist laws. If things do rapidly get more difficult for American women under the law, they will, regrettably, not be alone; there's a strong global history of legal traditions that are insanely poor for women's rights, from classical Rome to modern Pakistan, from legalized marital rape to women's total legal non-existence. Carving out a place of legal equality for our gender has been a long, devastating ride, and the most anti-feminist laws in history prove it (as do how many there are to choose from).

Some of our ideas about sexist laws worldwide are down to misinterpretation. The Times Of Malta reported in 2015, for instance, that the idea that Maltese men were allowed to marry women they abducted without legal consequence, something widely publicized earlier that year, was actually false; the penal code actually says that only the abductee is allowed to make a criminal complaint. (The law does, however, note that if for some reason the abductee and abductor marry after he's been convicted, he won't see any jail time, so it's not exactly a perfect system.)

However, others in history have been deeply outrageous, whether they were part of common law, religious law, laid down by Parliaments or Supreme Courts. If you want to know what an anti-feminist law looks like, here's a historical variety for your nauseating observation.

The Lex Oppia, as it was called, was a law in ancient Rome notable not only for its potential economic devastation but for the amount of women who came out to publicly protest in the Roman Forum against it. It's one of the first cases of mass public female protest in history.

The Lex Oppia was instituted after a barbaric series of wars in which Rome was both very poor and deprived of men. Many women had inherited the wealth of their dead warriors, and Roman legislators attempted to tap into their money. The Lex Oppia was in part a sumptuary law, or law on dress, which prevented women from owning more than an ounce of gold or wearing anything purple, but it also enforced a more problematic burden: widows, orphans, and single women were asked to put their wealth into the Treasury. It's a law that's caused a lot of historic confusion (why ask grieving women to stop dressing ostentatiously?), but it's also famous for the speech made by the noblewoman Hortensia in the Forum against it in which she declared, "You have already stolen from us our fathers and sons and husbands and brothers... But if you also steal from us our property, you will set us into a state unworthy of our family and manners and our female gender." The law was eventually repealed.

This is an interesting one: the Gentoo Code was first translated into English in the 1770s by the East India Company, but it appears to be much older. It's a compilation of Hindu law, and the restrictions on women are genuinely shocking. The text explains that "infidelity, violence, deceit, envy, extreme avariciousness, a total want of good qualities, with impurity, are the innate faults of womankind." They aren't allowed to take part in religious rites, have education, or be witnesses in a court of law, and must be guarded at all times throughout their lives, by fathers, husbands, and then children. "A man, both day and night," it notes, "must keep his wife so much in subjection, that she by no means be mistress of her own actions." Ugh.

The Fleta is interesting as a legal document, as it's one of the earliest Latin treatises on common law, and its name comes from the fact that it was likely written in the Fleet, a prison in London. However, it has another, more shocking aspect: it says that rape isn't rape if the woman gets pregnant.

Medieval gynecology was based on the understanding that the orgasms of both parties are necessary for conception to happen, a notion that carried on all the way to Victorian England. All very well and good for women getting off, but disastrous for rape victims; if they conceived, this logic dictated they must have orgasmed and enjoyed it, and therefore actually consented. The Fleta notes, "If, however, the woman should have conceived at the time alleged in the appeal, it abates, for without a woman's consent she could not conceive."

The notion of a "feme covert" may sound rather romantic, but the principle of coverture itself isn't. It was originated in early medieval Europe and carried on throughout much of Western legal history, and was a pretty simple principle: a woman, once married, had no legal existence. She was a non-entity outside of her husband, without separate rights, allowances or abilities, and couldn't legally control any aspect of her life, from child-bearing to signing contracts to holding onto property. While in practice some women were given more practical control, from noblewomen who ran vast estates to widows and middle class women who assisted with business matters, the law itself was pretty clear on the matter.

Widows in traditional upper-caste Indian society before 1856 were not believed to be capable of making another marriage after their first husband died, and weren't allowed to do so under civil law. The main reasons for this were cultural, but also economic; widows remarrying might be allowed to take the property of their first husbands with them, and it would have to be divided among any new legitimate children after the widow died. It was a particularly devastating policy for children who became widows when their elderly husbands died, and faced no other way of attaining financial independence or having any control of their lives.

The 1856 law aimed to make widow remarriage completely legal, but informal restrictions on the behavior of widows continue across India; the feminist organization Women Under Siege notes that widowhood is "a state of social death," easily recognized as widows traditionally wear all-white, and that "widows are still accused of being responsible for their husband’s death, and they are expected to have a spiritual life with many restrictions which affects them both physically and psychologically.”

This astonishing set of laws was attempt by the English government to stem the flow of venereal diseases, for which there was at the time no real cure. The problem was that they laid the blame for the spread of it firmly at the door of prostitutes, and the resulting Act was shocking: any woman could be detained on suspicion of being a prostitute, even if a police officer had no proof. She'd then be forcibly "inspected" without her permission, and if she had a venereal disease, was put in a "lock-house" (often the hospital of a workhouse) for up to a year, with no ability to escape or earn money, so that she couldn't infect anybody else. If she refused the examination she was often jailed. The Acts were repealed in 1886 after vociferous opposition by campaigners, including Florence Nightingale.

Myra Bradwell's attempt to practice law went all the way to the Supreme Court, where in 1870 it handed down the judgement that women weren't allowed to do it because it would endanger their sacred femininity. The opinion of Justice Bradley (that charmer above) in the matter may make you choke on your coffee: he noted that "The natural and proper timidity and delicacy which belongs to the female sex evidently unfits it for many of the occupations of civil life ... The paramount destiny and mission of women are to fulfill the noble and benign offices of wife and mother. This is the law of the creator."

Here's hoping laws that look to regulate women's bodies these days one day look this arcane.