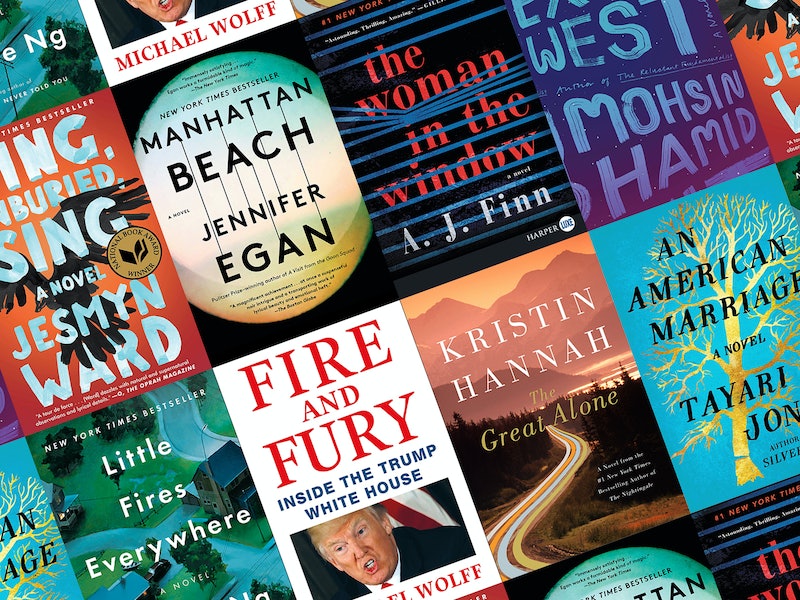 New York City's three public library systems — the New York Public Library (NYPL), the Brooklyn Public Library, and the Queens Library — just released their statistics for the most checked-out books of the year. One novel was the No. 1 checkout in all three NYC library systems, and, naturally, it has a connected to the Big Apple. Jennifer Egan's Manhattan Beach was the most popular book in NYC in 2018, and it was the only book to appear on all three libraries' lists. Keep reading to find out what other books New Yorkers were checking out this year.

Set on the shores of Brooklyn's Manhattan Beach, Jennifer Egan's novel centers on Anna, a young woman who trains to become the Brooklyn Navy Yard's first female diver during World War II. Anna's father disappeared sometime after she accompanied him to meet with a local gangster named Dexter Styles, and she has had to work tirelessly to provide for her mother and sister. But when a chance encounter leads her back to Styles, Anna seizes the opportunity to find out what really happened to her father. The highly anticipated follow-up to Egan's Pulitzer Prizer-winning novel A Visit from the Good Squad, this book certainly lived up to readers' many expectations for it.

Many of the Top 10 most checked-out books in the NYPL system are recent releases, but there are a few old friends to be found here:

As the NYPL's Assistant Director of Reader Services, Lynn Lobash, points out, many of the books on this year's lists of top checkouts in NYC libraries have been showered with awards and notoriety. Manhattan Beach was nominated for both the 2017 National Book Award and the 2018 Women's Prize, and it won the Carnegie Medal in 2018. Fire and Fury: Inside the Trump White House, which came in at No. 5 and No. 6 on the NYPL and Queens Library lists, landed author Michael Wolff on Forbes' roundup of the year's highest-grossing author.

The Top 10 most checked-out books at the Brooklyn Public Library were:

Four of the books on the NYPL list were also highly popular in the Brooklyn and Queens Library systems. As previously noted, Jennifer Egan's Manhattan Beach was the No. 1 checkout in all three library systems, and Michael Wolff's Fire and Fury made an appearance on the list for the Queens Library's popular checkouts. Joining these are Dan Brown's Origin (No. 7, Queens Library) and Celeste Ng's Little Fires Everywhere (No. 7, Brooklyn Public Library).

The most popular books in the Queens Library system this year were:

What books were people reading at your library this year?