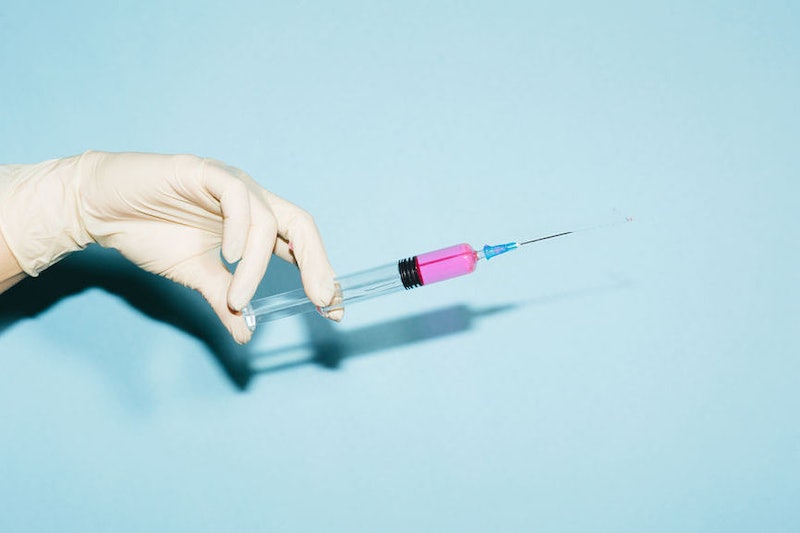 Ever found yourself in an infuriating debate with an anti-vaxxer in your auntie's Facebook comments? Or had a coworker earnestly explain to you why, exactly, the Earth absolutely must be flat? If you answered in the affirmative, the results of a recent YouGov study on the most popular science conspiracy theories in the UK won't be all that surprising — though they're still likely to raise your heart rate just a little.

Let's start with vaccines: according to YouGov, a fifth of Brits think it's "probably or definitely true" that vaccines "have harmful effects which are not being fully disclosed to the public." Younger respondents were more likely to dismiss the notion of vaccine harm, with 59 percent of 18 to 24 year olds deeming it "definitely false"; in comparison, only 34 percent of those aged 55 and above agreed. Only 1 percent of 18 to 24 year olds said it was "definitely true" that vaccines had hidden harmful impacts, while 5 percent of 25 to 44 year olds said the same.

Just a quick recap of just how damaging anti-vax beliefs can be: earlier this month, NHS England chief executive Simon Stevens called vaccine rejection "a serious and growing public health timebomb," as the Guardian reported. According to Unicef, almost 170 million under-10s worldwide aren't vaccinated against measles; half a million of those are in the UK.

If your auntie's one of those spouting anti-vax misinformation all over your timeline, perhaps direct her as a starting point to what the NHS has to say: "Vaccines have to be thoroughly tested for safety before they're made routinely available. Each vaccine's safety is continually monitored, even after it's been introduced."

Another alarming finding from the YouGov survey: while 70 percent of respondents agreed with scientists' warnings about climate change, some supported the statement that "the threat of climate change is over-exaggerated." Among 18 to 24 year olds, 9 percent of respondents thought the danger was overplayed; among those aged 55 and over, that proportion rose to 32 percent.

Last year, the United Nations' Intergovernmental Panel on Climate Change (IPCC) released a report which found that "limiting global warming to 1.5°C would require rapid, far-reaching and unprecedented changes in all aspects of society," a report UN Secretary-General António Guterres called "an ear-splitting wake-up call." In short? Any window for tolerating climate deniers has long since expired.

The YouGov survey also found a significant amount of moon landing truthers: one in six respondents said the landing was probably or definitely staged. Older respondents were most likely to definitively reject this conspiracy theory — the only theory where this was the case. 62 percent of those 55 or older said the statement "the moon landing was staged" was definitely false, compared to 48 percent of 45 to 54 year olds and 50 percent of 18 to 24 year olds.

Here's one small salve the YouGov survey offered, in the face of anti-vax proliferation and climate change denial: a solid 93 percent of Brits said the Earth was not flat. At least that's something, eh?