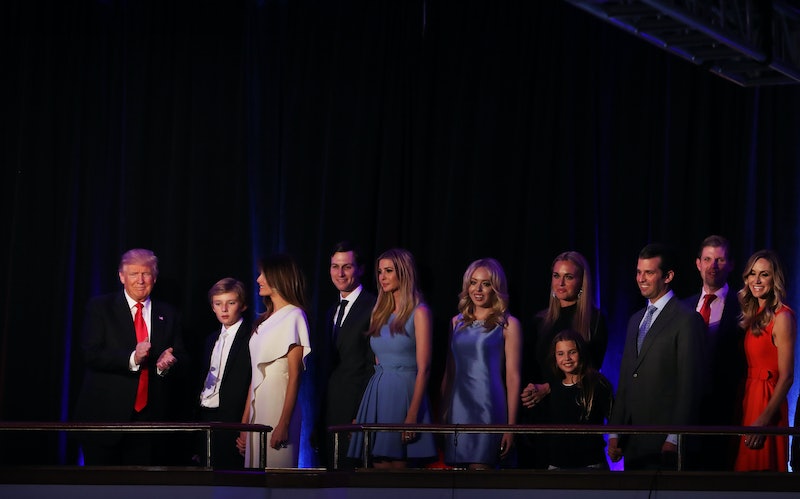 The Economist and YouGov have conducted a poll on the first family, and the results make it clear who the most popular Trump family member is. In the survey, released Friday, Melania Trump had a higher favorability rating than any of the other Trumps — and in fact, she was the only one to emerge from the poll with a net positive popularity rating at all.

In the poll, conducted between March 3 and 5, 51 percent of respondents said they had either a very favorable or somewhat favorable opinion of the first lady. Tied for the next most popular were Ivanka Trump and Donald Trump, each of whom was viewed favorable by 44 percent of respondents. Rounding out the pack was Donald Trump Jr. at 36 percent favorability, his younger brother Eric Trump at 32, and finally, Jared Kushner, who is viewed favorably by a mere 27 percent of Americans, according to the poll.

Tiffany Trump, Donald's only child with his second wife Marla Maples, was left out of the poll entirely with no explanation. So was Barron Trump, Donald's 12-year-old son.

YouGov noted that since mid-2017, their polling has showed Melania's favorability rating increasing by nine points. The poll also found that on the whole, Melania is more well-liked by men than by women; as YouGov noted, this may be a side-effect of the fact that there were more Democratic women than Republican women in the survey, while the male respondents were evenly split between the two parties.

Although Melania's popularity has fluctuated wildly throughout the Trump administration, the Washington Post reported in June 2018 that her favorability ratings have consistently lagged those of her last two predecessors, Michelle Obama and Laura Bush.

It's unclear exactly why this is, but some have pointed to Melania's relatively low visibility as first lady: She didn't move into the White House until five months after her husband was inaugurated, and at one point went nearly a month without appearing in public. Her "Be Best" campaign, which aims to reduce bullying in schools, has remained relatively low-profile since she launched it in May 2018.

Of course, if that theory has any merit, it's also equally conceivable that Melania's relative distance from everyday political affairs may be part of why she's more popular than any of the other Trump family members. By contrast, Ivanka and Jared are both high-profile policy advisers to the president, while Don Jr. has drawn significant attention for his role arranging a meeting in 2016 between Trump campaign officials and a Russian lawyer who later identified herself as an informant for the Russian government.

It's worth noting that a good amount of the respondents in the Economist/YouGov poll said "I don't know" when asked if they liked one Trump or another. For instance, 27 percent of those surveyed had no opinion of Kushner, while 15 percent of people had no opinion of Ivanka. Intriguingly, seven percent of respondents said that they don't know whether they have a positive or negative opinion about the president himself.