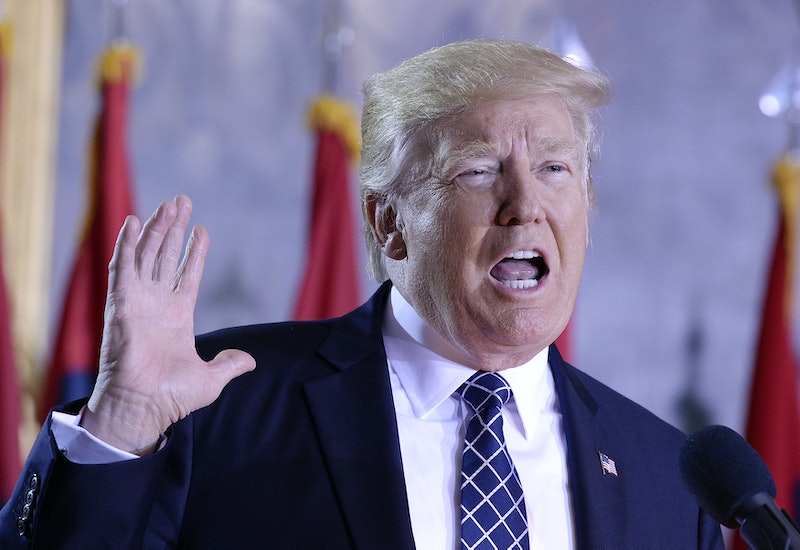 In a Wednesday commencement address at the United States Coast Guard Academy, Donald Trump encouraged graduates to "never, ever, ever give up." That sounds pretty typical of a commencement speech, doesn't it? Well, he certainly doesn't seem to be able to give up on blaming the media. Trump said, shortly afterward:

Look at the way I've been treated lately, especially by the media. No politician in history ... has been treated worse, or more unfairly. You can't let them get you down.

As unsurprising as it is that he would make a commencement speech about himself, it's worth noting that Trump still can't stop faulting the media for everything that goes wrong in his presidency.

He is not alone in this. Many of his fellow Republicans, as well as a number of his supporters, were not able to actively defend Trump firing Comey, so instead they blamed the media for making such a big deal of the situation. Never mind that the firing of a key investigator into his campaign was indeed a big deal; Trump has normalized the narrative that the media exists only to spread lies about him and his administration.

This is classic authoritarian behavior. Trump wants to control how he is talked about, and he has been reportedly overwhelmed with anger that the investigation into his campaign's ties with Russia has largely prevented him from doing so. So instead of showing any accountability, Trump has fed into the lie that the media has invented stories about him to tear him down. If he can't control the media, then he will try to minimize its credibility.

This should alarm us. Yes, we can just attribute Trump's statement to his usual whining, but he is actively encouraging Americans to disregard the media. That is a dangerous sentiment. It is the media's job to speak truth to power. We must report on what people in positions of power say, what they do, who they are talking to, and why it matters. There is no excuse for poor reporting, of course, or a failure to fact-check information, but Trump does not have the license to dismiss every negative news report about him as unfair treatment.

Now that we are several months into the Trump administration, a question lingers: Why, despite all the scandals and revelations that have surfaced during both his campaign and his presidency, do his supporters not abandon their sense of party loyalty to him? Why do they opt to believe that the media is lying about him, or being too harsh? Whatever the reason may be, Trump's constant — and increasingly desperate — criticism of the media will only solidify a certain idea in the minds of his supporters: that the media cannot be trusted.

We cannot let this go unchecked. By calling the media "fake news" and "haters," Trump is hoping to maintain his supporters' trust so that they are not inclined to believe the damaging news stories about him. If this continues, it will become more and more difficult to convince those who voted for Trump that he has more than likely obstructed justice, and that he does not follow the guidelines accorded to the office he occupies.