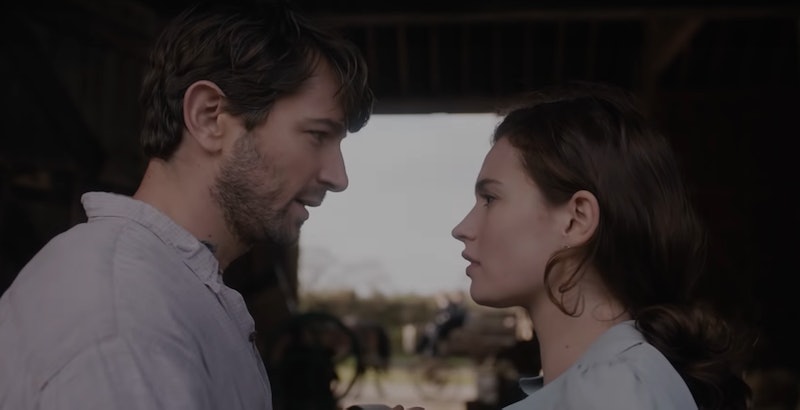 So, you need a little romance in your life but don't want to leave your apartment, or even your couch for that matter. It's hot out; that's totally acceptable. And anyway, the internet has your back. There are a bunch of newly available romantic movies to stream this August on Netflix, Hulu, HBO Go, and Amazon Prime. You get to choose your platform and then choose your love story. Any kind of love story.

A classic '90s rom-com that we're all still quoting to this day? Check. A silly early aughts teen comedy about royalty? There's a couple. A romance about death. Like, literally, about death? Got it. A high school story about love the premise of which will make you cringe for your younger self? Sure thing. A period piece with a really long title that features a whole bunch of Downton Abbey stars, including our dearly departed Lady Sybil? Yes, duh. I think it's pretty obvious that's on the list too, at this point.

If you're looking for romance, the movies that are becoming available to stream have you covered, no matter what your specific tastes are. Check out the trailers, descriptions, and release dates below, and see what you want to add to your must-watch list for August.

In this 2007 romantic-dramedy, Catherine Zeta-Jones and Aaron Eckhart play chefs who fall in love while working together. It's not the most revolutionary thing ever, but hey, at least the leading lady isn't a journalist like in every other rom-com. Plus, it has Abigail Breslin fresh off her Little Miss Sunshine Oscar nom.

P.S. I Love You, also from 2007, is romantic and all about death. It's based on the novel of the same name by Cecelia Ahern, and stars Hilary Swank and Gerard Butler as a couple whose relationship continues on after he passes away via a series of letters.

In this 2004 sequel, Mia moves to Genovia and gets engaged... but does she stay engaged? There's another man in the picture! What will happen?! By the way, this movie trades out Robert Schwartzman for Chris Pine. Apologies to any Rooney fans out there.

This very long-titled 2018 film was already released in the U.K. and France, but in the U.S. is being released for the first time on Netflix. Based on the book by Mary Ann Shaffer and Annie Barrows, it follows a writer who becomes intrigued by the people of Guernsey Island following World War II. That said, if you're a Downton Abbey fan, all you need to know is that this movie reunites four of the stars: Lily James, Matthew Goode, Jessica Brown Findlay, and Penelope Wilton.

To All The Boys I've Loved Before — August 17

To All The Boys I've Loved Before is a brand new Netflix Original movie based on the novel of the same name by author Jenny Han. This one's a teen romance, and follows a high schooler who is shocked to find the private letters she wrote for her crushes were actually sent to them.

It's a classic. You already know what it's all about.

This second Hulu romantic offering also stars Julia Roberts, and features the classic rom-com situation of a person trying to get two people together but then falling in love with one of them herself.

There's not a ton of romance coming to HBO Go this time around, but It's Complicated is there for you, if you've never seen it or need a repeat viewing. Meryl Streep and Alec Baldwin plays ex-spouses who end up having an affair with each other post-divorce.

Hilary Duff and Chad Michael Murray star in this 2004 teen romance that is a modern (at the time — just look at that flip phone) retelling of the classic Cinderella story.

The Prince And Me — August 1

A college student played by Julia Stiles falls for a guy at her school... who turns out to be a prince. Did you see that one coming?

These movies start coming out August 1, so if you're interested, you don't have to wait long now. Get your popcorn, popsicles, Pop-Tarts, or whatever you need ready, and get watching.