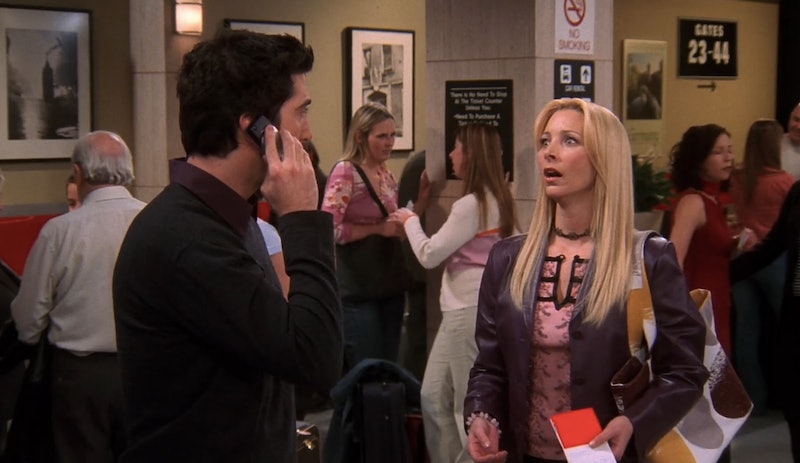 Friends was on for 10 years and aired 236 episodes, and while some things understandably became a little predictable during that time — primarily, Ross and Rachel's timing always being awful — the show still knew how to throw a curveball every now and then. There were some very surprising moments on the series and, for the most part, the most shocking Friends moments came during season finales. Something unbelievable would happen like Joey accidentally proposing to Rachel or Ross returning from China with a surprise girlfriend, and fans had to wait months to find out what would happen next.

So, when it comes to the most shocking moments from each season, a lot of them are from scenes that were meant to be cliffhangers. And those are just undeniably surprising because that's their whole purpose. The show wanted to keep fans wondering what would happen next all summer. (Would Joey and Rachel actually get married? It couldn't be!) That said, there are some Friends seasons where the most unexpected moment came earlier on, as you'll see in the list below.

If you're ready to take a sometimes cringe-worthy path down memory lane ("I take thee, Rachel", anyone?), then read on.

Season 1 doesn't have a ton of shocking moments, because it was still fresh and the characters and relationships were still being established. We needed to be set up for nine more years of Ross and Rachel drama, after all. And the finale really seals that deal when Rachel goes to the airport to meet Ross after his China trip and profess her love... only for the audience to find out he's returning with his new girlfriend, Julie.

Seven episodes after "The One Where Rachel Finds Out" (that's the title of the Season 1 finale above), "The One Where Ross Finds Out" aired. Ross finds out about Rachel's feelings for him and finds out that she knew about his feelings for her after she left him a drunken voicemail about "closure." It isn't the voicemail that makes for the surprising moment for viewers, though. It's the very end of the episode when Ross leaves Rachel at Central Perk after an argument... but then returns and they kiss.

Season 3, Episode 15 is "The One Where Ross & Rachel Take A Break", which we all know kicks off many more references to what being "on a break" even means. How you feel about the fact that Ross goes and immediately hooks up with Chloe from the print shop depends on whether you side with Ross or Rachel, but it was still surprising when it happened. It's debatable which moment of their one night stand had the biggest shock factor for viewers: the end of Episode 15 when Ross and Chloe kiss, or the start of Episode 16 when she walks out of his bathroom the next morning.

In Season 4, the most shocking moment has to be when Ross says, "I take thee, Rachel" during his wedding ceremony with Emily. It's one of the most iconic moments from the series. The viewers were shook. Everyone at the wedding was shook. Phoebe was shook listening in on the phone from New York. Emily was so shook that she didn't even answer the officiant asking if he should go on until the premiere of the next season.

Honorable Mention: Had "I take thee, Rachel" not occurred during this season (and even in the same episode!), Chandler and Monica hooking up while in London for the wedding would have easily been the most shocking moment of this season. Really, these two moments might be the two most shocking of the entire series.

It's the one where Ross and Rachel get super drunk on the Vegas trip, have drawings all over their faces, and try to phone order "more alcohol" from "Vegas." Oh yeah, and they also get married and surprise everyone in the process.

This episode has a ton of back and forth with Monica and Chandler when it comes to them getting engaged. Richard is even back just to make things more dramatic. While Chandler's plan to surprise Monica with a proposal by first telling her he doesn't want to get married at all backfires (great plan, really solid plan), Monica manages to surprise Chandler (and fans) when she decides to propose to him instead.

Phoebe finds a positive pregnancy test in Monica's bathroom wastebasket at the end of the episode right, which comes before the finale. The pregnancy test ends up being Rachel's, but the fact that someone is pregnant was a huge deal — it can only be so many people!

It's so hard to choose this moment, because it just seems like such a cheesy thing that was never going to work out anyway, but Rachel saying "OK" when Joey seemed like he was proposing to her at the end of Season 8 was surprising. It was also pretty out of character, and obviously she was going to find out what was really going on as soon as the next season began.

The will-they-won't-they of Rachel and Joey went on longer than you remembered, didn't it? At the end of the Season 9 finale, Joey comes to Rachel's room and they kiss. Their attempt at actually being together ended up being over by Season 10, Episode 3.

That's right, the most shocking moment of Season 10 is not when Rachel gets off the plane to Paris — by that point we all knew she would get off the plane. The most shocking moment is when Phoebe and Ross race to the airport to try to catch Rachel... and find out they are at the wrong airport. As a viewer, it seemed like this was going to be the big triumphant romantic moment, and when it wasn't, it was unclear what would happen. There was only about 20 minutes left in the episode! Also, you aren't watching Friends thinking about how the New York City area has three major airports, so it really catches you off guard.

I don't know about you, but I'm pretty rattled all over again. Really takes you back, doesn't it?

More like this
Ozzie’s Coming Out Scene With Kitty On 'That ’90s Show' Has Twitter Sobbing
By Brad Witter
Ashton Kutcher Wants Danny Masterson “To Be Found Innocent” In Rape Retrial
By Jake Viswanath
This 'Gossip Girl' Wardrobe Error Has Gone Viral On TikTok
By Alyssa Lapid
All The ’70s Easter Eggs You Missed In 'That ’90s Show'
By Grace Wehniainen
Get Even More From Bustle — Sign Up For The Newsletter
From hair trends to relationship advice, our daily newsletter has everything you need to sound like a person who’s on TikTok, even if you aren’t.