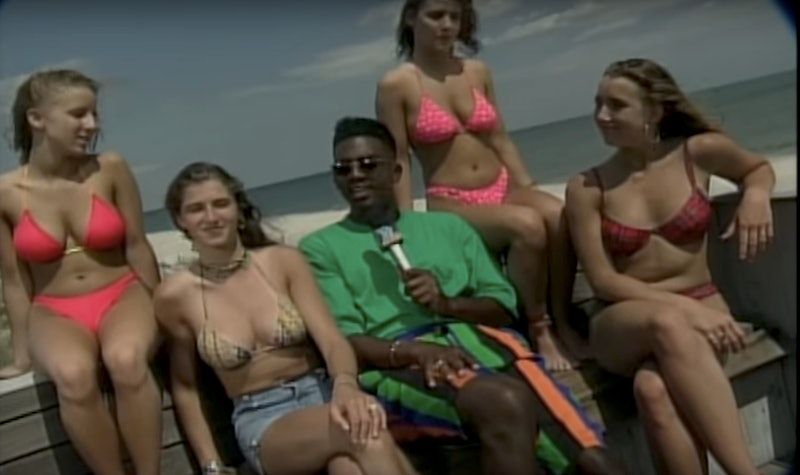 Let the fist pumping begin! With summer finally upon us, MTV is gearing up to kick things off in a major way at the Jersey Shore. We're getting a MTV Beach House reboot and just the thought of it is giving me major '90s nostalgia. I don't know about you guys, but I absolutely love summer. However, getting to the beach isn't always such an easy task. When I was younger, MTV Beach House was always there to mentally transport me right into the middle of the oceanfront dance party. And although there were major moments of FOMO while watching, MTV Beach House would put me in summer-loving mode from the comfort of my own home. It was nothing short of amazing.

And the details of the brand new, revamped version sound just as great. The beach party is set to kick off on June 8, as the network plans to switch things up a bit, opening with the very first MTV Beach House Festival including performances by MisterWives and KYLE, according to Variety.

The network is hoping appeal to “a new generation of fans” with the revival, according to MTV vice president of integrated marketing Matthew Newcomb, while the show will be hosted by some of MTV's top in-house talent such as Nessa from Girl Code, Teen Wolf 's Cody Christian, and Chico Bean fromWild ‘n Out. As reported by Variety, the setting will have a super nostalgic feel and take place at a '90s inspired beach home in New Jersey.

Now that social media is a thing since the last time the show aired, MTV's parent company, Viacom, plans to integrate the show into all of its social channels, providing behind the scenes access on the social sites for MTV, Comedy Central, and Spike.

For those who aren't familiar, the show, which originally premiered in 1993, was an iconic music video block between a bikini-clad, belly pierced beachfront dance extravaganza hosted by comedian Bill Bellamy and later Carson Daly. The show featured a myriad of celebrity guests and live musical performances. It was literally a pop culture phenomenon throughout the summers of the '90s and 2000s.

Thanks to MTV for bringing back the beach house. Meanwhile, I'll just be sitting here, on my sofa, in my bikini, patiently waiting for its return on June 8.