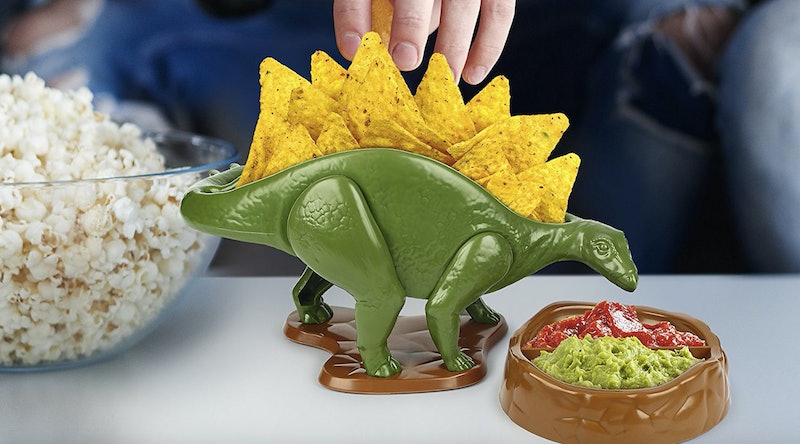 Adulthood has really taken its toll on the institution of chips. First of all, we have to pay for our own chips now. (And, like, our rent — but the chips somehow seem like an extra rub.) On top of that, guac is extra, and we are reminded of it at every turn. And to make it worse, I was recently told that calling Tostitos chips "toasty toes" was frowned upon in polite chip-eating society. With all of this in mind, never before has there been more dire a need of this Nachosaurus, a dinosaur chip-serving dish that says, "Hell yeah I'm grown enough to throw my own soirée, but I reserve the right to never emotionally mature past the age of 12, now please pass the salsa."

The Nachosaurus is currently being sold on Amazon for $14.99, which I reserve is an extremely small price to pay to make your childhood dreams come true. And it has two sisters! A Tricerataco, another dinosaur-shaped receptacle that holds tacos in it, as well as a Tacosaurus Rex, which is a thing I hope Chris Pratt personally owns and will purchase for him if he does not.

The TL;DR: your trips to Chipotle just got even more lit than the comet that rendered these dinos extinct (too soon?). Here are the Nachosaurus, Tricerataco, and Tacosaurus Rex in all of their prehistoric glory.

If the concept alone isn't enough to get you on board, perhaps the glowing reviews will — take this one, written by Amadeus Platypus II, titled "According to my daughter (who loves dinosaurs), this is 'better than a $1000 in the bank':"

Pros: Holds my 16 year old daughters' cell phone at the perfect angle to watch YouTube. In theory it also holds two tacos. Or one cell phone and one taco. You get the idea.

Cons: Its too awesome to actually put tacos on it. Not enough to deduct a star, though.

Final thoughts: We named ours Tyrone.

Its a miracle!! My tacos taste amazing and its all because of the TriceraTACO. I could say I bought this for my child but that would be a lie. I bought this bad boy for me! Taco Tuesday's? We're talking Monday, Tuesday, Wednesday, Thursday.... Everyday is Taco Tuesday.

The thing that really seals the deal, though, is that the power of the Nachosaurus is truly infinite — it transcends chips and salsa, becoming the perfect receptacle for whatever it is your '90s baby heart desires.

What I'm trying to say is that I already purchased this on Amazon Prime, and screw Taco Tuesday and literally all the other forms of dish ware that I own, because this is how I plan on serving my adult self through the rest of 2018. If anybody needs me, catch me taking some Nachosaurus and guac to the face while marathoning Jurassic Park and The Land Before Time (Cera remains an icon and we should all aspire to be her, thank you for coming to my Ted Talk).