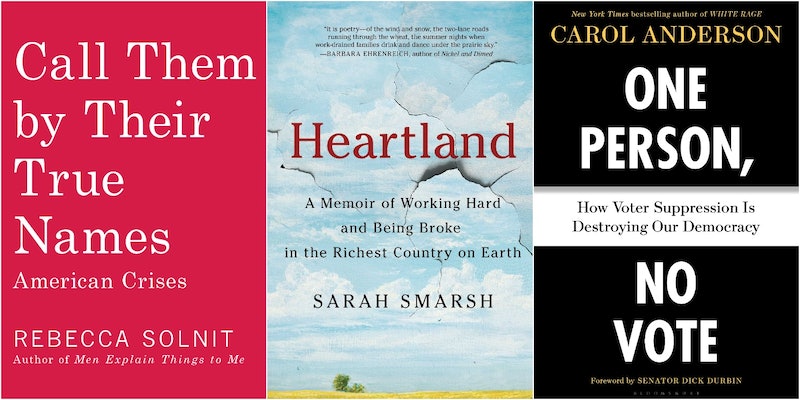 The National Book Foundation released the longlist for the National Book Award for Nonfiction, and you're going to want to set aside ample room on your bookshelf for these 10 fascinating books. It's no secret that there is a lot going on politically both in the United States and beyond, and these books are completely indicative of the many different topics at the forefront of the American consciousness right now. From One Person, No Vote, Carol Anderson's book about voter suppression to Rebecca Solnit's Call Them By Their True Names, her examination of the country's gun violence epidemic, these 10 books all have their finger on the pulse of some of the most controversial topics confronting Americans right now.

2017's National Book Award for Nonfiction winner, Masha Gessen's The Future Is History: How Totalitarianism Reclaimed Russia, examined the cyclical history of Russia and what made it possible for the unobstructed reemergence of the old Soviet order in the form of today's terrifying and seemingly unstoppable mafia state. So, clearly the judges of the National Book Award has adopted a no holds barred philosophy when it comes to choosing their nonfiction nominees. Check out all the books on this year's longlist below: