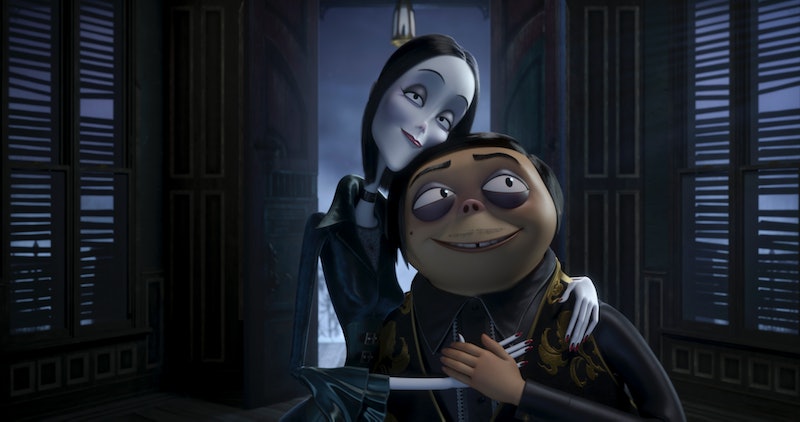 "They're creepy and they're kooky, mysterious and spooky." Those lyrics could only refer to the U.S.'s first family of morbid, the Addams family. Most millennials probably remember the Addams Family movies starring Anjelica Houston and Christina Ricci from the '90s when you hear the theme song's "dun dun dun dun" followed by the "snap-snap." But now a new version of the clan of macabre misfits is coming to the big screen. And the trailer for The Addams Family, a new animated film, shows that the family's still up to their old tricks.

The voice cast for The Addams Family, which is set to come out this Halloween, includes a multitude of big names. Oscar Isaac will voice the patriarch of the family, Gomez Addams, alongside Charlize Theron's matriarch Morticia Addams. As for Wednesday Addams, which Ricci made so iconic in her run as the character, she'll be voiced by Chloë Grace Moretz. She'll be joined by Stranger Things star Finn Wolfhard as Pugsley Addams, Nick Kroll as Uncle Fester, and Bette Midler, who will voice Grandmama.

While it's probably difficult for most people who grew up with these characters to imagine them as anyone other than the actors from 1991's The Addams Family or its 1993 sequel, Addams Family Values, the new animated interpretations seem to capture the family's essence, based on the new teaser for the film.

The teaser doesn't reveal much plot for the forthcoming Addams Family movie, but IndieWire reported that the film will be about a very modern story, with the family avoiding a TV host who "is hellbent on turning their lives into a reality television series." IndieWire also revealed that the TV host hampers the family's preparations to have a massive celebration with their relatives.

The second part of the plot sounds a little bit like the 1998 movie Addams Family Reunion, a made-for-TV movie that starred Tim Curry as Gomez, Daryl Hannah as Morticia, and Nicole Fugere as Wednesday. In Addams Family Reunion, Gomez's grandparents get ill with a disease that makes them age normally — while the rest of the family doesn't age at all — and Morticia and Gomez try to find other members of the family that might possibly cure them. In doing so, they end up finding the Adams family, a "normal," family played by Ed Begley Jr., Haylie Duff and more.

If these two films really are similar, the new Addams Family movie could include a new set of Addams family members that are actually a part of the dark-magic family, but that's all speculation. Regardless, it looks like fans will be getting a new movie to fulfill all their kooky and spooky needs, and that's enough to make Morticia and Gomez lovers sick with happiness.

More like this
The 'Kenan & Kel' Reunion On 'SNL' Took A Dramatic Turn, Thanks To Keke Palmer
By Brad Witter
The First Trailer For 'That '90s Show' Includes So Many Nods To The Original Series
By Jack Irvin, Alyssa Lapid and Grace Wehniainen
17 Photos Of The 'Wednesday' Cast Vs. The 1991 'Addams Family' Cast
By Grace Wehniainen
These ‘Love Actually’ Plotlines Are “Out Of Date,” According To Director Richard Curtis
By Grace Wehniainen
Get Even More From Bustle — Sign Up For The Newsletter