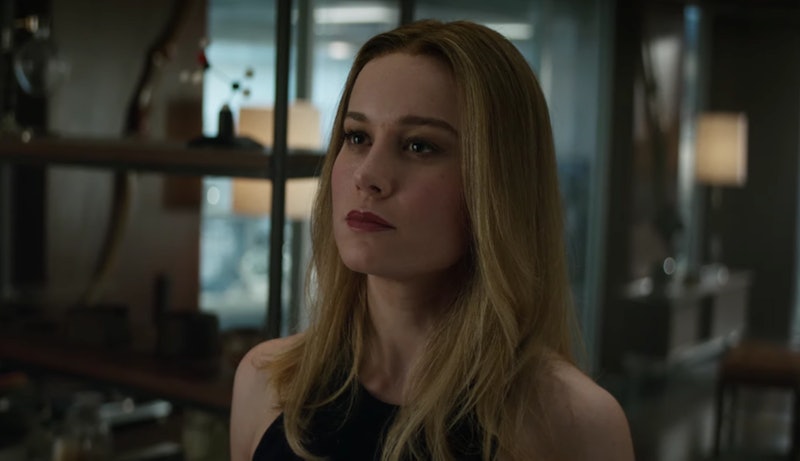 On the heels of Captain Marvel's major release, Marvel Studios released a new Avengers 4 trailer that previews Captain Marvel's introduction to the team. Not only does the new Avenger's Endgame clip tease the arrival of a new superhero, it also teases a brand new team. with a much broodier looking Hawkeye and spiffy new uniforms, which audiences on Twitter believe are the Quantum Realm suits. There's also the addition of Nebula and Rocket to the Avengers team to look out for. But, let's face it, despite all the new information teased in the trailer, the main event is really the arrival of Captain Marvel.

Spoilers for Captain Marvel ahead. The last time we saw Carol Danvers, was in the Captain Marvel post-credit scene, when she made a surprise arrival in the Avengers compound. Having received the pager message from Fury, she showed up to the location where the signal was originating and had only two words after startling Black Widow: "Where's Fury?" Well, based on her brief appearance at the end of this new trailer, it looks like she's getting the warm welcome one might expect from Earth's mightiest heroes mourning the loss of, well, half of the world's population.

Captain Marvel doesn't appear until the very end of this new Endgame trailer. Notably dressed in civilian clothes (she showed up in the Captain Marvel post-credits scene wearing her superhero uniform), Captain Marvel looks like she has settled in nicely to the Avengers compound, and that means she's ready to meet Thor for the first time. The two engage in a stare contest of sorts, with Thor summoning his axe to make it fly right past her face. When Captain Marvel doesn't flinch, Thor declares, "I like this one," and gives a very on-brand giggle. Well, now that she's got Thor's blessing, it seems like she'll officially be joining the Avengers team.

The moment of levity is really welcome at the end of what can only be described as 2 of the most depressing minutes in the Marvel Cinematic Universe. The trailer definitely sets up Endgame as the final bow for Iron Man, Captain America, and even Thor, as the first half goes back and forth between old images from previous films in their respective trilogies and their post-Infinity War lives. "It seems like a thousand years ago," Iron Man says off screen. "I fought my way out of that cave, became Iron Man, realized I loved you. I know I said no more surprises, but I was really hoping to pull off one last one." This is presumably part of Tony Stark's recording from space addressed to Pepper Potts, as teased in earlier Endgame trailers. It's also a pretty succinct summary of his story in the MCU so far. And summaries like that are usually followed by a very definitive ending.

On the bright side, Marvel Studios also released a brand new poster for Endgame, this time featuring Captain Marvel.

It's possible that Avengers: Endgame could be the last time fans get to see Iron Man, Captain America, Thor, and really any one of the original Avengers in action. Thanos has already defeated them once, it's only reasonable to assume that, to defeat Thanos for good, the Avengers are going to have to sacrifice some of their own. But, at least now they have Captain Marvel on their side. So, who knows, maybe every superhero we've come to know and love will walk away from Thanos unscathed — just maybe.