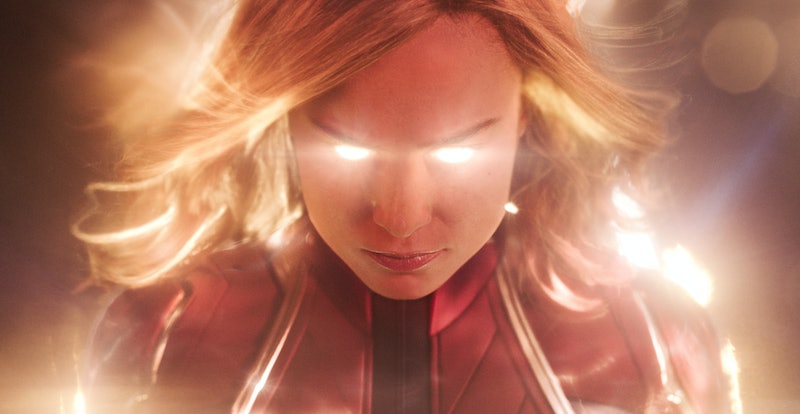 Major spoilers ahead for Captain Marvel. Between Avengers: Infinity War and its followup, Avengers: Endgame, out Apr. 26, two other standalone movies premiered with post-credits scenes alluding to the epic dusting of half of the universe that took place at the end of the former. The first was at the end of Ant-Man and the Wasp, which finds Scott Lang (Paul Rudd) trapped in the Quantum Realm when his companions are dusted away. The next happens after the closing credits of Captain Marvel. But how many post-credits scenes does Captain Marvel have? Stay in your seats, gang, because there are two to wait for.

The first post-credits scene at the end of Captain Marvel directly connects to the Avengers: Infinity War post-credits scene. If you need a refresher, here's what happens: After Thanos snaps his fingers and succeeds in obliterating half of the population of the universe, the Avengers are in a state of shock. The post-credits scene cuts to Nick Fury (Samuel L. Jackson) and Maria Hill (Cobie Smulders) in a car just as the dusting begins. Hill disappears first, but before Fury starts to disintegrate, he sends off a message on an old school pager. What message does Nick Fury send? The colors and insignia that appear after a few moments are the logo belonging to Captain Marvel herself.

The first post-credits scene that hits after Captain Marvel has ended picks up right where Infinity War's left off, and happens halfway through the credits. Steve (Chris Evans), Natasha (Scarlett Johansson), Bruce (Mark Ruffalo) and Rhodey (Don Cheadle) are back at Avengers headquarters, watching the population numbers continue to drop. They've got Fury's pager hooked up to a battery and it's continuing to transmit a message before its power abruptly cuts off. The team argues a bit over how to get it up and running again, with Rhodey and Bruce saying they have no idea what the thing is or who its communicating with. So why are they bothering?

But Steve puts his foot down, demanding that the others hook the power back up. "I want to know who's on the other end of this thing," he says, before turning around and coming face-to-face with Brie Larson's Carol Danvers, a.k.a. Captain Marvel herself. And she looks a bit pissed, like she knows what's up. Like she's seen a bit of the destruction on her return to Earth, and she's not sure who to trust. "Where's Fury?" she demands to know from the Avengers, before the screen cuts to black.

Carol Danvers and Nick Fury close out Captain Marvel having become quite good friends, and having lived among a technologically advanced civilization, she helps Fury out by upgrading his very '90s pager. Though she leaves him with some serious instructions: "For emergencies only," she says sternly. Once Fury figures out what's happening at the end of Infinity War, he knows what he has to do, and after sitting through Captain Marvel to see this scene, you'll know just how powerful she is, and that there's hope for the Avengers out there, dusted or not.

But thankfully, that isn't the only post-credits scene after Captain Marvel. Much like Ant-Man and the Wasp ends with a giant ant playing the drums, Captain Marvel has a humorous finale as well. Goose the cat is bound to be a fan favorite, and she gets plenty of moments to shine. But even though Fury really takes a liking to Goose, as one alien in the movie points out, Goose isn't actually a cat. She's an alien known as a Flerken, which has giant tentacles that fly out of his mouth to help her feed.

Goose uses her abilities to help Captain Marvel and Fury by taking hold of the powerful device that the Kree and Skrull are fighting over in the film, which turns out to be the Tesseract. Goose swallows the Tesseract whole during the film, keeping it safe. But if Goose has any cat in her at all, as any cat owner knows, what goes down could always come back up. The second post-credits scene finds Goose sitting on Nick Fury's desk, presumably adopted by the S.H.I.E.L.D. agent, before she starts to do that signature cat gag. Before we know it, the Tesseract is up and out, covered in Flerken spit.

It's unclear just yet how Captain Marvel fits into the Tesseract's timeline across its other appearances in the MCU. But the more important post-credits scene is definitely the first, giving us a hint at what's to come in Avengers: Endgame, hopefully with Carol figuring out a way to save our beloved Avengers. The second? Well, that's just something for the cat people in the audience.