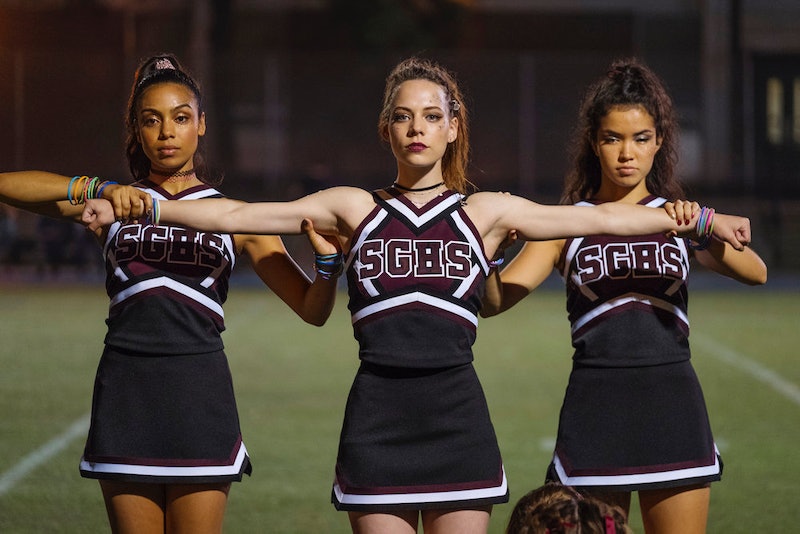 If you like your soapy teen dramas with a smidge of crime, you should add this new series from USA to your winter watchlist. The new trailer for Dare Me, which premieres on Dec. 29, looks like Friday Night Lights but with high school cheerleaders who might be murderers. Do I really need to say more?

The series is an adaptation of Megan Abbott's best-selling thriller of the same name in which a magnetic new coach (Willa Fitzgerald) drives a wedge between best friends Beth Cassidy (Marlo Kelly) and Addy Hanlon (Herizen Guardiola). When Addy's loyalty suddenly falls with Coach French instead of Beth, tensions rise, and questionable choices are made.

According to the show's official description, "their young lives are changed forever when a shocking crime rocks their quiet suburban world." It's referred to as a "part coming-of-age story, part small-town drama, part murder mystery" that "exposes the physical and psychological extremes that some young women are willing to endure in order to get ahead." It's executive produced by Gilmore Girls' Gina Fattore and Friday Night Lights' Peter Berg. Abbott is also a writer and executive producer on the series.

The first trailer for Dare Me was released on Nov. 8, complete with Euphoria-style glitter eye makeup application, intense locker room conversations, and cheerleaders' ominous hallway marches. But these new 30 seconds ramp up the intensity. Beth and Addy seem to be privy to some secret Coach is keeping and between the guns being loaded and blood washing down the drain in this teaser, it doesn't seem to end well for anyone.

"Abbott’s voice brings a fresh perspective to USA Network, with a gripping, female-focused story that combines the ultra-competitive world of high school cheerleading with the secrets of a seemingly-perfect small American town," USA and Syfy president Chris McCumber said of the series.

But the town isn't perfect after all, as the blood-drenched trailer for this new teen drama makes all too clear.

More like this
Everything To Know About The 'Daisy Jones & The Six' TV Series
By Maxine Harrison and Brad Witter
Netflix Shut Down 'Bridgerton' S3 Rumours About A “Very Dark” Storyline
By Bustle
The Song At The End Of 'The Last Of Us' Ep 1 Has A Deeper Meaning
By Sophie McEvoy
'Succession' Season 4 Will Be An "Absolute Banger" According To Cousin Greg
By Bustle Staff
Get Even More From Bustle — Sign Up For The Newsletter
From hair trends to relationship advice, our daily newsletter has everything you need to sound like a person who’s on TikTok, even if you aren’t.