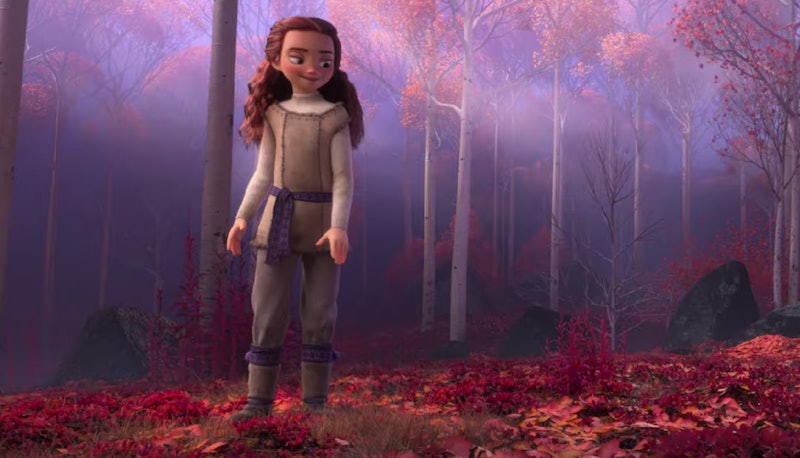 The first teaser trailer for Frozen 2 dropped on Wednesday morning, Feb. 13, and if you haven't already checked on any child under 10 in your life to see how they're coping, you might want to do that. But everyone knows that Frozen isn't just for young children — far from it. Grown adults are totally free to freak the eff out over this new peek into the next Frozen chapter, which comes out in November. Perhaps the most exciting part of the trailer is the fact that it shows two new characters that will be in Frozen 2. Because, as exciting as it is to see Elsa, Anna, Kristoff and Olaf again, the new characters are pretty intriguing so far.

The new characters in Frozen 2 don't get a lot of screen time in the teaser trailer, which mostly focuses on Elsa (voiced by Idina Menzel) practicing her magical powers with a roaring ocean. The only actual glimpses of the two new characters come later, when short clips from the new sequel flash on the screen while intense music plays in the background.

After seeing little clips of Elsa, Anna, Kristoff, and Olaf, eagle-eyed viewers can spot a girl standing in a forest during the fall, surrounded by red and brown leaves. She looks to her side, and suddenly a blonde-haired boy with a green jacket blasts out from underneath a pile of fallen leaves and he spins up into the air. It all happens in under three seconds, so it's hard to get a clear picture of the two new Frozen characters, but as you can imagine, fans are already busy using their sleuthing skills to figure out who this boy and girl are.

The fact that the new characters appear in an autumnal forest fits in with the rest of the trailer's images of a picturesque fall landscape. The official description of Frozen 2 says that the Elsa, Anna, Kristoff, and Olaf will venture out beyond their kingdom to discover some ancient mystery. Last November, one of the Frozen 2 directors Jennifer Lee told Variety that the sequel would bring the main characters "far out of Arendelle," so it seems like that might be where they meet the new characters.

A previously reported casting clue hinted at new character additions for Frozen 2, as last July Variety reported that Evan Rachel Wood and Sterling K. Brown were both in talks to join the cast. Both of their names appear on the film's IMDb page, so it definitely seems like those actors could voice the mysterious boy and girl from the trailer.

On Twitter, two leading theories have emerged about who the characters are. Since the girl has an auburn-colored hair and the boy blonde, naturally some have conjectured that the two are Anna and Kristoff's kids.

This theory would make sense, especially considering the mysterious girl's apparent powers. Looking at the trailer, it definitely seems like she might have powers that mirror Elsa's, only instead of controlling ice and wintery cold, she brings about the magic of fall. If she does, in fact, have powers, then it stands to reason she could be related to Elsa.

Possibly the most popular theory, however, speculates that the new girl character could be Elsa's girlfriend. As you might remember, an online movement to make Elsa a lesbian character trended in 2016 with the hashtag #GiveElsaAGirlfriend. After that, co-director Lee spoke with Huffington Post about fans' requests that Elsa become the first gay Disney princess. "Where we’re going with it, we have tons of conversations about it, and we’re really conscientious about these things," she said, giving everyone hope that Elsa might actually get a girlfriend in Frozen 2.

Of course, people on Twitter have jumped at the chance to label this new Frozen 2 character as Elsa's girlfriend.

The fact that the new girl character will likely be voiced by Wood, an actor who has been vocal about her bisexuality, might be a good sign for fans who want Frozen 2 to have some LGBTQ representation. While the song "Let it Go" has unofficially become a coming out anthem, the new movie has an opportunity to take its fans' wishes and make Disney movies a lot more inclusive.