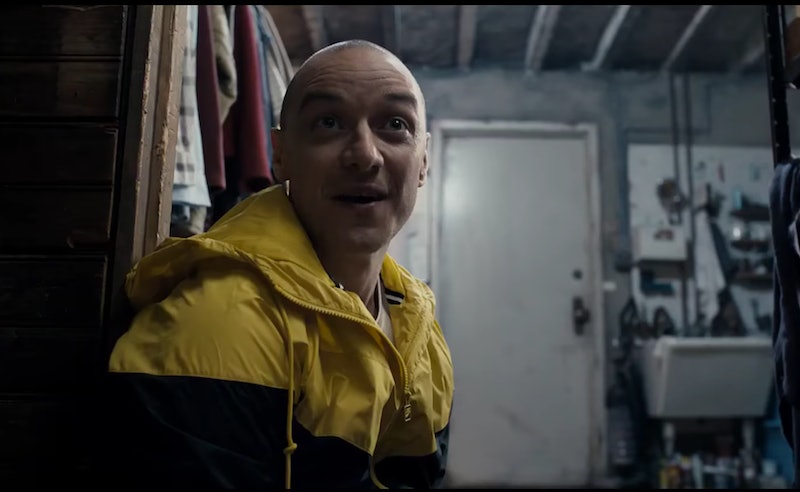 Warning: Major spoilers for 'Split' ahead. Since The Sixth Sense first hit screens back in 1999, perhaps no filmmaker has trumped M. Night Shyamalan's monopoly on twist endings. It's a reputation that hasn't always worked in his favor — see 2008's critically panned The Happening — but his latest offering has seemingly turned the tides. In an unprecedented surprise, Split connects to Unbreakable, making it the long-promised follow-up to Shyamalan's 2000 thriller.

The horror flick stars James McAvoy as Kevin, a young man with dissociative identity disorder who kidnaps three unsuspecting girls. He holds them in a windowless underground bunker, where they plot an escape as his 23 personalities wrestle each other for control. After a gruesome appearance from his superhuman identity "The Beast," Kevin successfully flees from police, and the movie cuts to a diner. Inside, a news broadcast recounts his crimes and dubs the perpetrator "The Horde."

One woman remarks that the case reminds her of a similar serial killer arrested 15 years ago and wonders about his name. The camera pans to Bruce Willis, who played superhero security guard David Dunn in Unbreakable. He reminds the woman the killer was called "Mr. Glass," which is, of course, the nickname of Samuel L. Jackson's villainous Unbreakable character.

By now, Split's ending has been over 15 years in the making, but Shyamalan has said Kevin was always part of the Unbreakable universe. "[He] was a part of the original, original script for Unbreakable. I pulled him out because it just wasn't balancing right. But a bunch of the scenes that are in this movie, I wrote 15 years ago. They were as is," he told The Hollywood Reporter in a recent interview. "But I knew I wanted to do a movie about him because I just loved him so much, and I thought it's a rich world for storytelling, so I was super, super excited to finally make it."

Shyamalan went on to say that he was cautious to keep Split's final moments under wraps because he wanted the film to speak for itself. "I didn't test the movie with the ending. I just tested it without it," he explained to THR. "At least half the audience hasn't seen my other [work]. They were too young to see it and they'll get educated after it. But they have to totally be seeing a story that works all on its own."

Because Split was largely a standalone, it doesn't serve as a full-on sequel so much as a subtle tease. Eventually, Shyamalan hopes to make a third movie that ties everything together. Here's to hoping the brilliant plot twists that built his career are back for good.