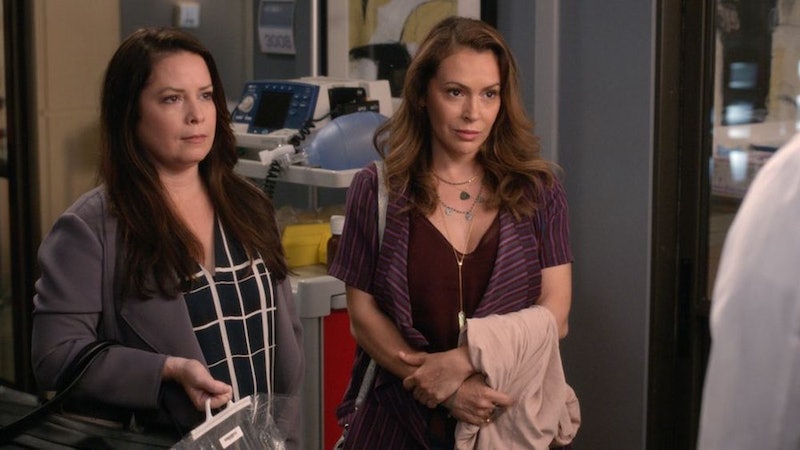 On Friday, Oct. 4, a new Grey’s Anatomy clip teases the Charmed reunion with Holly Marie Combs and Alyssa Milano. The two will reunite as sisters once again in an upcoming Thursday, Oct. 10 episode of Grey's Anatomy. Back in September, ABC announced that it would conjure a Charmed reunion for Season 16 of medical drama. As per a press release at the time, the description for the episode read, “A patient at the hospital is brain dead after falling into a construction site, and her two sisters must decide whether or not to keep her alive.”

The Grey's new clip, published on YouTube on Oct. 4, the two sisters played by Combs and Milano convene at a hospital to visit their sister Heather, a character who has yet to be revealed in the teaser. At the hospital, the sisters share a hug. “She fell into a construction site,” Combs says to Milano in the sneak preview clip. “You know Heather. She’s always on her phone.” The clip concludes with Sloan-Grey Memorial Hospital's Dr. Richard Webber (James Pickens Jr.) as he greets the two in the waiting room, which insinuates that the two are at Pac North.

Combs and Milano first played witch sisters Piper and Phoebe in the WB series Charmed, which ran between 1998 and 2006. Along with Combs and Milano, the series starred Shannen Doherty and Rose McGowan as a group of sisters who discover that they’re witches.

Combs and Milano’s Grey’s episode is part of ABC’s “Cast From the Past Week,” which reunites stars with former cast members on various shows. Along with the Charmed reunion, black-ish will feature a reunion of the 2000 sitcom Girlfriends (in which Tracee Ellis Ross starred), Single Parents will reunite Leighton Meester with her real life husband Adam Brody, The Goldbergs will reunite stars of the 1982 sitcom Cheers, and Fresh off the Boat will reunite Crazy Rich Asians co-stars Constance Wu and Ken Jeong, as per TVLine.

More so, Combs and Milano’s reunion doesn’t mark the only Charmed reconnection on the upcoming episode of Grey’s. The two reunited with Grey’s Anatomy executive producers Krista Vernoff and Andy Reaser, who both wrote for Charmed in the series’ heyday. On Instagram on Sept. 16, Combs shared a black and white picture of the four Charmed alums on set. “Reunited. And we couldn’t be happier,” Combs captioned the post. “@kristavernoff @andyreaser well... there were some tears.... just some. @greysabc #CastFromThePast”

Combs and Milano’s Grey’s episode isn’t the first time a Charmed reunion has been conjured. In May 2018, Combs reunited with co-stars Brian Krause and Drew Fuller to celebrate Fuller’s birthday. Krause portrayed Leo Wyatt, Combs’ on-screen husband in the series, while Fuller played their son, Chris. On Instagram on May 19, 2018, Fuller shared a black and white photo of the on-screen family. He captioned the photo, "Birthday Family Portrait.”

Combs and Milano's upcoming Grey's Anatomy episode will air on ABC on Thursday, Oct. 10 at 8 p.m.