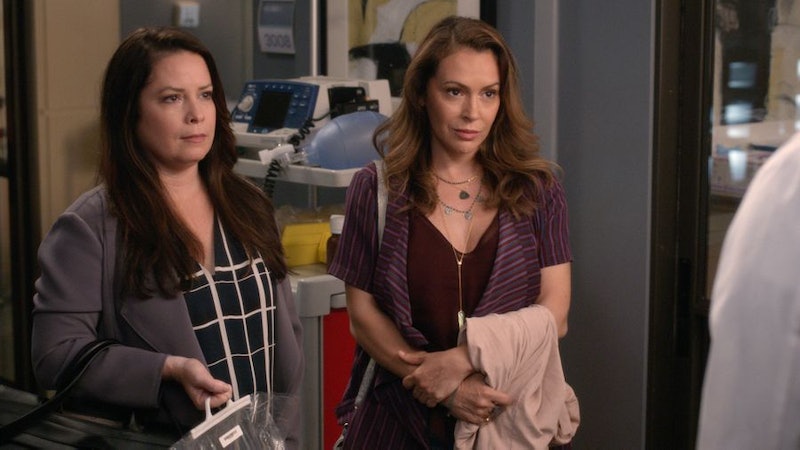 Charmed fans, gather your closest witches, Book of Shadows, favorite Whitelighter, and the Power of Three, because Grey's Anatomy is staging a Charmed reunion. You read that correctly. Alyssa Milano and Holly Marie Combs are joining forces once again, but this time on the ABC network.

The long-running medical drama revealed the magical news on Monday, and, well, Milano and Combs couldn't be more thrilled to be acting alongside one another. Better yet, they are playing sisters all over again. How exciting is that? Their episode is titled "Reunited" and will air on Thursday, Oct. 10, so you better set your alarm and mark your calendar before you forget. According to a press release, the episode description is as follows: "A patient at the hospital is brain dead after falling into a construction site, and her two sisters must decide whether or not to keep her alive."

Well, that just sounds like a heartbreaking episode, doesn't it? Knowing Grey's, their storyline will come with drama and most likely a lot of tears. If you didn't pick up on it, Combs and Milano's characters have another sister. That's right, there are three of them. The identity of the third sister has yet to be revealed.

For eight seasons, Milano and Combs played Phoebe and Piper Halliwell, respectively. Shannen Doherty and Rose McGowan played their other two sisters on the series. Doherty played Prue Halliwell, until she was killed off in the Season 3 finale. Following her departure, McGowan joined for the remainder of the series as their half-sister, Paige Matthews.

It's unclear if Combs and Milano's new sisterly roles are as close as their Charmed characters, but it doesn't really matter. Just to be able to see them on the small screen together is super exciting.

Actually, Milano and Combs aren't only reuniting with each other, but also with Grey's executive producers Krista Vernoff and Andy Reaser. Both Vernoff and Reaser were writers on Charmed. Alongside a Sept. 16 Instagram of the four, Combs shared her excitement by writing, "Reunited. And we couldn’t be happier. @kristavernoff @andyreaser well... there were some tears.... just some. @greysabc #CastFromThePast." Milano wrote on Instagram next to the official Grey's Twitter announcement, "This is going to be fun!" She can say that again.

The mini-Charmed reunion is part of ABC's "Cast From the Past Week." There are multiple reunions happening throughout the week, including a Girlfriends reunion on black-ish, a handful of Cheers stars appearing on The Goldbergs, Adam Brody playing Leighton Meester's (his real-life wife) ex on Single Parents, and Ken Jeong returning to Fresh Off the Boat with his Crazy Rich Asians costar, Constance Wu. These are only just a few of the many upcoming reunions.

The "Cast From the Past Week" is definitely a great way to celebrate past TV series, the stars, and the characters. Even though Charmed fans have been wanting a revival for a long time (a different one than the current CW reboot), at least they can now watch Milano and Combs acting together again in some capacity. Their new Grey's gig, even if for only one episode, is definitely better than nothing.

More like this
Shonda Rhimes Responded To The Surprise Exit Of A Day 1 'Grey's Anatomy' Figure
By Grace Wehniainen
Here’s What Happens To Bill & Frank In 'The Last Of Us' Video Game
By Brad Witter
Pamela Anderson's Sons Brandon & Dylan Have Their Own Hollywood Careers
By Arya Roshanian
Ashton Kutcher Wants Danny Masterson “To Be Found Innocent” In Rape Retrial
By Jake Viswanath
Get Even More From Bustle — Sign Up For The Newsletter
From hair trends to relationship advice, our daily newsletter has everything you need to sound like a person who’s on TikTok, even if you aren’t.