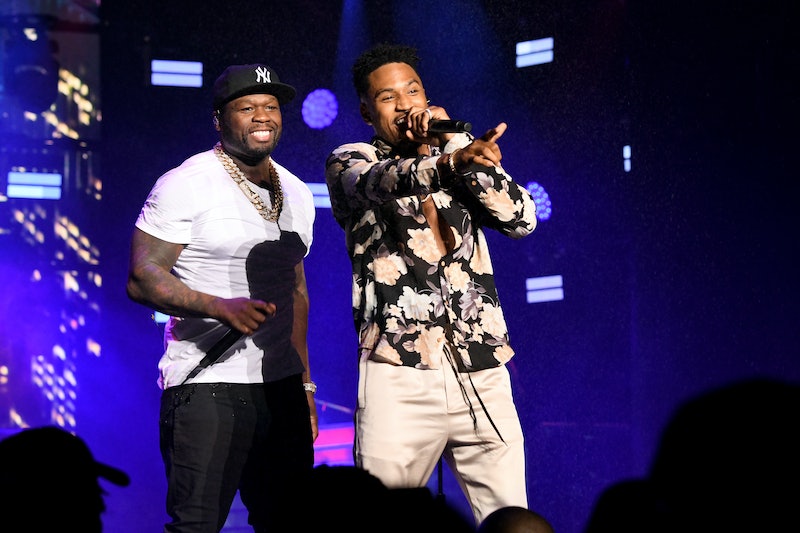 A mark of an iconic television series is how easily the theme song gets stuck in your head. The opening credits from Cheers, The Wire, Mad Men, The Fresh Prince of Bel Air, and Law & Order, for example, are all certified TV bops worthy of the shows they introduce. After six seasons, Power, co-created and produced by Curtis "50 Cent" Jackson, has arguably earned a spot in the pantheon of legendary opening credits songs. However, the Power Season 6 theme song is a remix of the original one used for the previous five seasons, and it might take some getting used to for day-one fans.

"Big Rich Town," written by and featuring both 50 Cent and Joe, was first released in April 2014, just months before Power's initial June release that same year. The lyrics are about moving up in New York City, by any means necessary. The song is the perfect companion to the series, which follows James "Ghost" St. Patrick (Omari Hardwick), a Queens-born drug dealer and club owner, who takes advantage of his best friend, lover, wife, and even his son, in order to get what he wants.

"Legal or illegal, baby, I gotta make it," Joe croons in the hook, perfectly summing up Ghost's trajectory over the course of the series.

But this final season as a whole has been dubbed "The Final Betrayal," which means that everything has changed when it comes to the relationships between the characters fans have come to know and love. Because of the show's darker tone this season, 50 Cent tells Bustle that he wanted to make the theme "feel a little younger" to freshen it up and balance out the bleakness. The new theme song was released in July 2019 as a remix of "Big Rich Town," replacing Joe with Trey Songz and featuring Bronx-based rapper A Boogie Wit Da Hoodie.

Fans had mixed reactions to it, especially since at the time of the track's initial release it wasn't totally clear that the remix was officially replacing the original theme for the final season. But it all started to solidify the closer to the premiere date. "Power really changed the opening theme song to the mix with Trey and I couldn’t be more pissed about it," one fan wrote on Twitter after the Aug. 20 world premiere of the final season at Madison Square Garden started to leak on social media.

But 50 Cent doesn't seem worried all that much about whether a remix of the theme song would be a dealbreaker for fans. In that way, the shift mirrors the way the series' writers have never had any qualms about killing off characters that fans love or don't expect to die. 50 Cent says it's one of the things he respects most about the show, not least because that's just how life is sometimes.

"The writers take everyone on an emotional journey, 'cause the characters that they built, they built them up, and have you invested in them — and then [they get killed off]," he says, offering up his hands like a shrug emoji.

It had to be the same with the opening credits. "The original Power song played for six years, so people are conditioned to it, and it's connected to the show." But it's his song and (partly) his show, so he'll update it if he wants to.

At the very least, 50 Cent adds that he "tried to make it light," which is why he says he kept the hallmark horns and the first four bars of the first "Big Rich Town" verse, but changed up every other thing about it.

That lightness in both the beat and the levity with which 50 and Boogie rap their verses is a stark contrast to the darker themes of the final season. For this reason (and mostly because Joe is so beloved and MIA on the remix), it's likely that whether or not the new Power theme is Good™ will become as contentious a debate as whether or not Angela (Lela Loren) was right for Jamie.

If anything, the impassioned fan reactions to the new theme song are a testament to Power's success in winning over loyal and dedicated viewers. Whether you like the Trey Songz version or not, you'll still be singing some version of "Big Rich Town" in your head well into Monday morning after each episode.