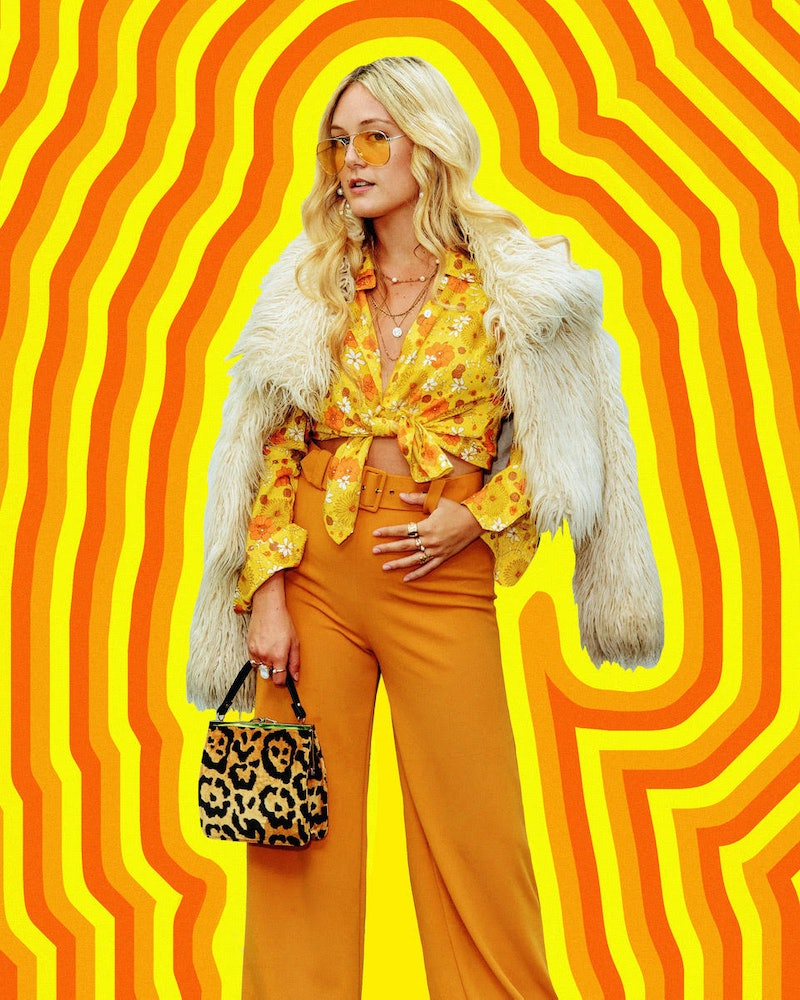 In the most famous image of Elizabeth I, the Armada Portrait, painted in 1588, the formidable monarch sits surrounded by symbols of her success, including paintings of the defeated Spanish ships, and a badass-looking crown. But, before that, what catches your eye is her outfit. With a billowing cloak, jewels all over the place, and more bows than you can shake a sceptre at, there’s only one word to describe what’s going on here: extra. Elizabeth’s arms are held near akimbo as a result of the excessive amount of fabric around them, and her ruffle is roughly twice the size of her head. In this portrait, size matters. The outfit ⁠— and, by extension, the Queen herself ⁠— takes up half of what we’re looking at, illustrating Elizabeth’s majesty, and, most importantly, her power.

Throughout British history, women have asserted power through size. Queen Victoria’s robes went on for days, Emmeline Pankhurst’s feathery hats added at least three inches to her height, and Margaret Thatcher’s bouffant made it clear that the lady was not for turning.

And then there’s the power suit; undoubtedly the most important image of power dressing in modern sartorial history. While boxy shoulders and traditionally “masculine” tailoring are most often associated with 1980s New York (thanks in no small part to Working Girl, of course), Dr. Rebecca Arnold, a senior lecturer in the history of dress & textiles at London’s Courtauld Institute, explains that it was actually an “international style” for “a particular kind of woman.” The power suit, she explains, was worn by women the world over “who [were] newly entering the executive layer of business and, at that time, it meant negotiating a male-dominated workplace.” My own mother is quick to vouch for this when I ask her about the office attire she saw as a PR exec in ‘80s London. Boxy tailoring was the thing, she tells me. And, for further proof of the power suit’s international influence, we need only peep inside Princess Di’s closet.

"I’ve often associated ‘power dressing’ with ‘dressing like a man’ — but this outfit makes me feel powerful outside of that. I like to think that there’s power in dressing effeminately too." — Florence Given

For so many years, super sizing was the mode of choice for women looking to be taken seriously. Beyond the desire to mimic the masculine physique, it seems to me that women were determined to take up space in any way they could. If their voices were talked over, their shoulder pads made their presence known. Micro-aggressions were met with larger-than-life hair dos. When male colleagues looked down on them, their heels got higher.

But now the game is changing. Where clothes once spoke for us, we now speak for ourselves. No longer a symbol of the power we’re striving for, our clothes are now an extension of the power we inherently feel. When Meghan Markle guest edited the September 2019 British issue of Vogue — the most important fashion publication on the planet — clothes were not her focus. Instead, we heard from those featured about the work they are doing and the changes they were making through the voices, through the power they have cultivated over years of hard graft.

Below, nine women and non-binary people describe what power dressing means to them in 2019. No longer boxed in by boxy tailoring, these people have found styles that explore the length and breadth of fashion and what it can say about you. Proving that, today, power dressing can mean anything, as long as it reflects the person beneath.