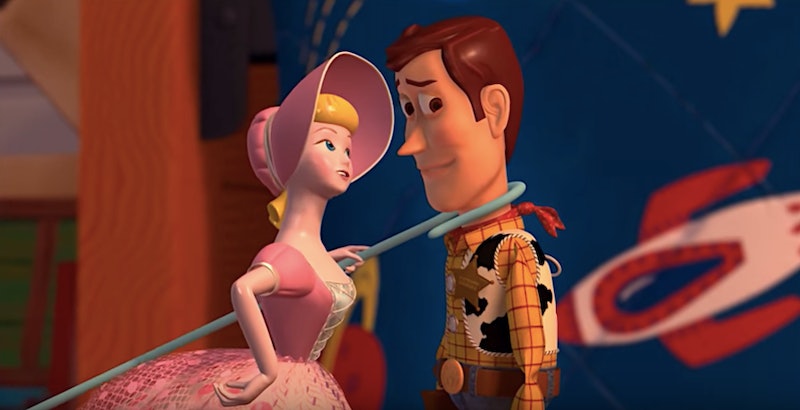 Toy Story 4 may not be hitting theaters until June, but Disney is doing its very best to drum up as much excitement as possible about what's to come for this beloved franchise. Up until now, it seemed pretty clear that a majority of the original cast would be returning for the latest installment, but the latest Toy Story 4 poster and teaser confirms Bo Peep's return as well, even though the character had been noticeably absent for Toy Story 3. And from the look of things, she's gone through some significant changes during her time away, which includes sporting an entirely different look from the pink ensemble she was most known for.

The last time fans checked in with these iconic toys, they had moved out of a now-fully-grown Andy's bedroom and taken up residence with a young, sweet girl named Bonnie. It was also implied that Bo, who had been around since the very beginning, had already been donated or lost in some way prior to the start of the film. Aside from that, little is known what exactly happened to her, but it seems that Toy Story 4 will finally shed some light on the matter and help her to reunite with her longtime love, Woody.

The teaser is brief, but clearly shows Bo Peep entering the scene in a big way. And even though her look is very different, she's still rocking that shepherd's cane. But how will she fit into the overall story moving forward?

A previous teaser introduced a newcomer being brought into the ranks of Bonnie's toy collection. His name is Forky, played by Tony Hale, and he's the product of one of Bonnie's craft projects that has now morphed into a toy (though he is rather hesitant to call himself that, at least at first). According to Entertainment Weekly, Woody is eager to help show Forky the ropes, so to speak, but when a family road trip finds Woody taking an unexpected detour, he encounters a real blast from the past when he finds himself face-to-face with none other than Bo Peep, whom he hasn't seen in several years.

As the poster demonstrates, she's ditched the pink wardrobe for more of a jumpsuit attire and she's definitely giving off some serious superhero vibes — cape and all.

"Bo's taken control of her own destiny," Toy Story 4 director Josh Cooley said in a statement regarding the character's upcoming return, as per EW. "While Woody was watching Andy grow up, Bo gathered dust until she took it upon herself to head out into the world. And when Woody shows up, they can't believe that they've found each other again."

Bo has come to love being a free spirit and enjoys life on the open road. But as happy as she and Woody initially are to see one another, they soon realize that a lot has changed between them over the years and that they have two very different ideas of what it means to be a toy these days. Will this mean they'll end up going their separate ways? Only time will tell, but at the very least it's comforting to know that such a prominent character will finally be getting the empowering storyline she deserves.