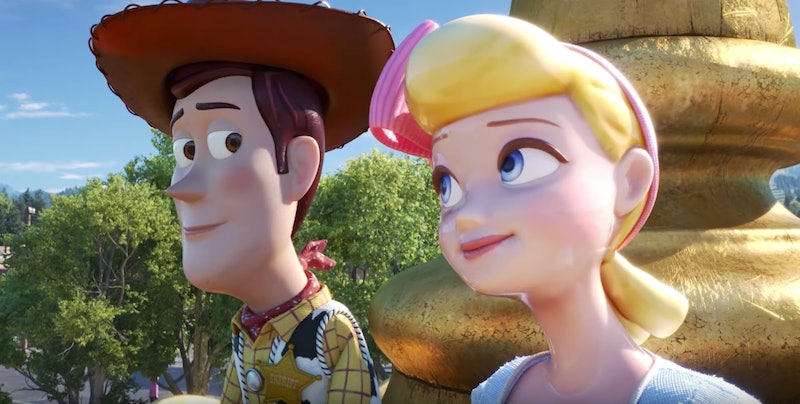 Little by little, Disney/Pixar has been teasing the next installment of Toy Story movies, the fourth of the series, leaving kids and adults alike desperate for more peeks at Woody (Tom Hanks) and Buzz's (Tim Allen) new family post-Toy Story 3. Finally, a new full-length Toy Story 4 trailer dropped on Tuesday, March 19, giving fans of the animated films reason to belt out a "yee-haw" in honor of Jessie (Joan Cusack). But the new movie, out June 21, seems like it takes an even darker turn than the past Toy Story films — yes, even darker than Toy Story 3 — as Woody discovers a whole world outside his kid's room, which includes the world of lost toys, and a reunion with Bo Peep.

The Toy Story 4 trailer starts out with a silly introduction of a new toy that Woody and Buzz's young human made. "Bonnie made a new friend in class," Woody says. Then he clarifies, "No she literally made a new friend," before showing the crew of toys the new member of the group, Forky — a plastic spork with pipe-cleaner arms and googly eyes (voiced by Tony Hale). Forky, being a spork and all, doesn't feel like he fits in with Bonnie's toys, though, and he makes a brave escape, inevitably dragging Woody along on the journey, leading them both into an existential crisis.

As much as Toy Story 3 ventured into the dark world of toys whose human owners had outgrown them, Toy Story 4 will journey even deeper into the question of what a toy's existence might mean without a human to play with it. As seen in the trailer, Bo Peep (Annie Potts) seems to have found out that life as a free, untethered toy is better than playing by the rules. Woody, ever the faithful toy, however, is struggling to understand why Forky or Bo wouldn't want to belong to a child like Bonnie.

"You are going to help create happy memories that will last for the rest of her life," Woody says in the clip, in an attempt to convince Forky that belonging to a human will fulfill his life's purpose. But as seen in the trailer, plenty of toys seem to live happily as autonomous, lost toys, who belong to the whole world around them rather than one kid like Andy or Bonnie. Those self-governed toys include some of the creepiest Toy Story characters of all-time, dummies.

Anyone who has seen the recent Goosebumps movies will probably instantly think of Unhappy Slappy when they see the new Toy Story 4 trailer's dummies. But for the audiences that remember when the original 1995 Toy Story came out, the dummies in the trailer likely bring back memories from another '90s movie: Bride of Chucky. Regardless of what the creepy human-like dolls remind you of, most people can probably agree that they're terrifying.

As scary as the horrifying dummies are, they seem to serve as the next-gen version of the Pizza Planet aliens that first showed up in the original Toy Story. Remember how freaky those things were when you were a kid? No? Just me? Okay.

As unsettling as it might be to see Woody actually considering what life might be like as a toy with no kid to play with him, it seems like the fourth Toy Story addition settles any existentialism once Woody gets reunited with Bonnie. After all, Woody proclaims in the trailer, "I was made to help a child." Forky might not know why he exists, but Woody sure does.