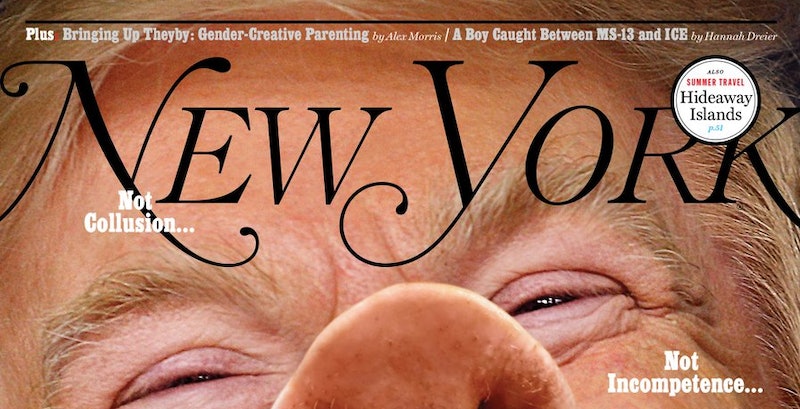 It's Trump, convincingly photoshopped to look like he has a pig's snout. This somewhat disconcerting image — just absurd enough to convince you that it's not real, but done well enough that you almost question yourself — is what graces the latest New York magazine cover: Trump with a pig snout.

The article that the cover refers to is one about what the magazine claims is the biggest problem potentially facing Trump's presidency. "Not Collusion... Not Incompetence... Not Cruelty... It's the Corruption, Stupid," are the words plastered over Trump's outsized face. "Why His Self-Dealing is His Biggest Political Liability," a subheadline reads.

If you read on, then, you'll find an article that delves deeply into the way that Trump has reportedly so far used the presidency for his and his family's own personal profit. "For Trump, whose business revolves around the marketability of his name, there has proved to be no public policy too big, and no private opportunity too crass, to exploit for personal profit," the article claims — in only the the fourth paragraph of a long read.

Beginning with the cover and then continuing throughout the article, New York magazine is not pulling any punches when it comes to the current occupant of the Oval Office.

New York magazine hasn't exactly been shy in the past in their criticism of Trump. Their 2016 pre-election cover featuring an image of Trump mid-yell with the word "LOSER" pasted over his mouth went viral, but not exactly the way its creators were expecting it would. That's because the magazine went to print just after former FBI director James Comey released a letter to Congress revealing that the FBI was reopening its investigation into Hillary Clinton's emails because of a new cache of emails that had just turned up. Although that new cache didn't change anything in terms of the results of the investigation, Clinton and others believe that the change in momentum that Comey created was enough to help swing the election to Trump.

New York's editors explained in a message to their readers that they decided to go with the image despite the way people might perceive it as a failed prediction.

"We ... had always intended for our cover to convey multiple meanings: certainly that Trump was running behind, but also that America itself was losing, dragged down into a filthy dumb-show campaign," the editors wrote, continuing:

After a brief reconsideration... we stuck with our plan instead of scrapping it, with the knowledge that the cover would be seen by many readers only one way — as a prediction — even as we hoped that the power of the image transcended any one interpretation of its meaning.

The pig snout cover is unlikely to take as much heat as the "LOSER" cover did after the fact — not least of all because it's largely focused on trends that have already risen in the Trump administration and can't be read as a pure prediction. The Trump Organization — and Trump's failure to effectively distance himself from it — has already begun causing problems for his presidency. Most recently, this has taken the form of a court case that a federal judge in Maryland just allowed to proceed, where the plaintiffs are alleging that Trump is unduly benefitting from "emoluments" from foreign governments — a practice banned under the Constitution.

Whichever the way the court case goes, this cover is likely to join the ranks of the other famous covers skewering Trump that have taken root in the national consciousness since he began his life in politics. Don't forget the Time magazine cover with Trump's hair on fire, or the Der Spiegel cover showing a process of devolution ending in Trump. Now you have another item on the list of "things you can't unsee" — the president as a pig.