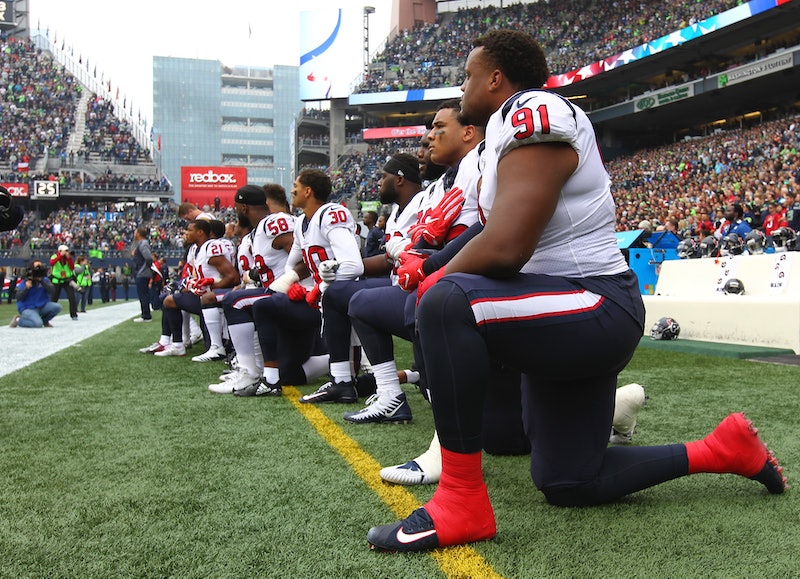 In the last two years, football fans have had more to talk about than just who wins and who loses. And now the NFL has hit pause their national anthem policy that asks football players to either stand or wait in the locker room when the “Star Spangled Banner” plays before games.

On Thursday, the National Football League and its players association released a joint statement that read, “In order to allow this constructive dialogue to continue, we have come to a standstill agreement on the NFLPA’s grievance and on the NFL’s anthem policy.”

It also said that the players and the league had been “working on a resolution to the anthem issue," and in those discussions they decided that the best thing to do would be to freeze the policy, which had been in place since May, The Hill reported. This decision came only 10 days after the players association filed a grievance that challenged the anthem policy, Sports Illustrated reported.

“No new rules relating to the anthem will be issued or enforced for the next several weeks while these confidential discussions are ongoing," the statement read.

Protests during the national anthem started back in the summer of 2016 when the quarterback of the San Francisco 49ers, Colin Kaepernick, sat during the song to protest police brutality and racial inequality. He soon decided to take a knee instead, and as SB Nation reports, Kaepernick’s gesture soon became a movement that would sweep the nation, sparking some backlash from people who called such protests a diss at America, including the president.

Last year, President Donald Trump spoke out about the anthem protests at a rally in Huntsville, Alabama. SB Nation reported at the time that he said he’d like the NFL to fire players who knelt.

"Wouldn’t you love to see one of these NFL owners, when somebody disrespects our flag, to say, 'Get that son of a b*tch off the field right now, he’s fired'?" Trump said at the rally.

But despite some backlash, Kaepernick and other protesters had the courage of their convictions. They kept sitting, kneeling, and raising their fists during the anthem.

Kaepernick told NFL Media back in 2016 that he didn't want to show "pride in a flag for a country that oppresses black people and people of color."

"To me, this is bigger than football and it would be selfish on my part to look the other way," he told NFL Media at the time.

After years of turmoil, NFL owners voted in May to approve the policy that was in place until today.

Today’s Tammy Leitner said the freezing of that policy was being “considered a win for those players who took a stand by taking a knee.”

However, it’s likely the conversation about this isn’t over. SB Nation NFL writer Adam Stites told The Today Show that the NFL left the public with more questions than answers as they released their statement.

“We’re back where we were the last two years where there really isn’t any rule in place,” Stites pointed out.

The same day the policy was frozen, the Associated Press reported that officials were considering fining or suspending any Miami Dolphins players who protest during the anthem on the field during the upcoming season.

Things are still up in the field as far as the policy goes, but for now it looks like the players will be able to protest in peace.

More like this
Joe Lycett Just Took HIs David Beckham Qatar Protest To A Whole New Level
By Sophie McEvoy
Footballer Jake Daniels Shared His Thoughts On A World Cup Boycott
By Sam Ramsden
Iran Has Issued A Death Sentence Over Mahsa Amini Protests
By Catharina Cheung, Darshita Goyal and Maxine Harrison
Jude Bellingham’s Superstar Football Talent Runs In The Family
By Maxine Harrison
Get Even More From Bustle — Sign Up For The Newsletter