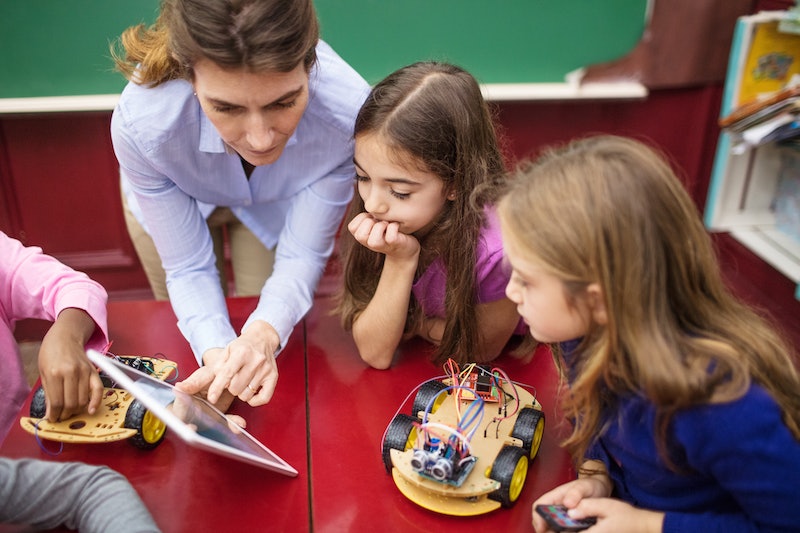 If you’ve ever visited the greeting card aisle in search of a kids' birthday card, you probably noticed that most options are sorted into two gender categories: pink for girls and blue for boys. This gender distinction doesn't just limit the types of cards kids receive, the clothes they wear, or the toys they play with — the effects of gender stereotypes can be felt well into the career paths we choose.

While girls and boys generally have similar abilities in math and science, boys exhibit a higher interest and confidence in Science, Technology, Engineering, and Math (STEM) subjects, a 2016 report from Educational Research Center of America found. With a gender gap in aspirations around STEM, researchers say it may be more challenging to retain women in the STEM pipeline. According to a 2016 Google report, women constitute just 28% of the science and engineering workforce, which leaves young girls without many role models in those fields.

That’s why Mercedes-Benz USA and Mattel partnered with the National Girls Collaborative Project (NGCP), a network of organizations that encourages girls to pursue careers in STEM, to create No Limits, an initiative across the U.S. where girls in over 100 organizations will engineer toy racetracks, design cars, engage with female role models, and attend STEM workshops. At Girl Day at UT Austin, an activation held in February, there were over 150 creative activities — think chemistry and balloon-powered cars — for more than 12,000 kids, parents, and educators.

“It’s hard to even consider doing something if you don't know it's out there or you haven't heard from people that have done it,” Karen Peterson, founder and CEO of the NGCP, tells Bustle. And according to a 2017 report from Frontiers in Psychology, even women who believe in their capabilities and go on to pursue a career in STEM still can be damaged by the stereotype that men are better in math and science.

When a cohort mostly consists of men, the male majority may not realize their biases against the small number of women in the room. As Peterson says, a woman may not get the full attention of her male counterparts when she speaks, which can make her feel like she doesn’t have an impact on the work. Even during group projects in school, Peterson says that girls typically take on the scribe role, while boys get to report out the work to the rest of the class.

To combat these inequities, Peterson recommends instituting a rule in business meetings that everyone in the room must speak before they finalize a decision. And in the classroom, teachers should ensure that group members trade roles halfway through the assignment, giving each person a chance to try out new skills.

As a way to combat gender bias, Mercedes and Mattel gifted Matchbox toy replicas of Swedish racing champion Ewy Rosqvist’s Mercedes to girls around the country. In 1962, Rosqvist became the first person to win every stage of the Argentinian Grand Prix, beating the previous champion’s time by over three hours. Despite facing criticism about a woman’s place in the racing sphere, Rosqvist followed her gut. “It’s amazing what a powerful symbol the story and the car is,” Peterson says, adding that she gets chills just thinking about how excited the girls were when they opened the packages.

Mercedes, Mattel, and the NGCP are also using this initiative to distribute resources and discussion guides to over 100 organizations around the U.S. that help girls get involved in STEM. They also distributed a video where young girls react to Rosqvist’s story and realize that they can play with toy cars, too. It may seem a little cheesy, but the message is a crucial one: gender stereotypes make girls and women believe that they can’t play with “boy toys” or pursue male-dominated careers.

“We're not going to change all the birthday cards," Peterson says. "So, what we focus on is helping girls see and challenge those stereotypes.”