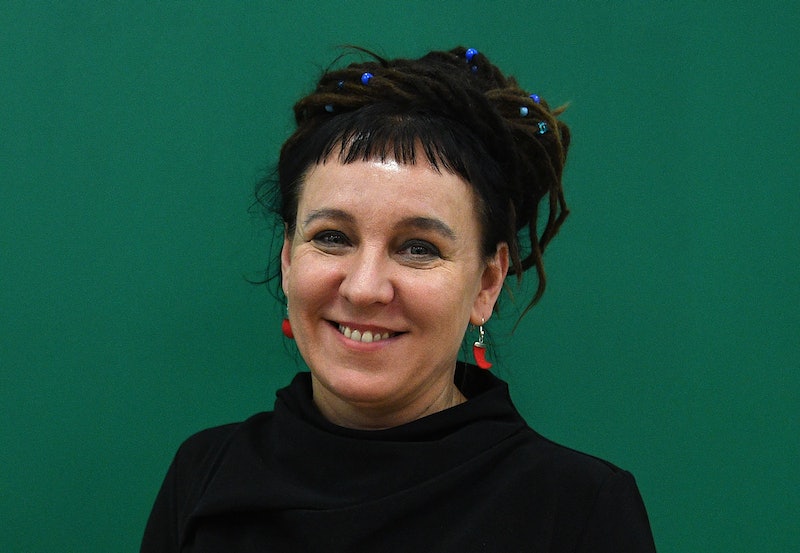 The Nobel Prize in Literature for 2018 was awarded to Olga Tokarczuk "for a narrative imagination that with encyclopedic passion represents the crossing of boundaries as a form of life." The author, who won the Man Booker International Prize in 2018, has been translated into English on several occasions, most recently for her books Flights and Drive Your Plow Over The Bones of the Dead, both of which were nominated for a National Book Award. (Bustle previously recommended her as one of the five women-in-translation you should be reading.)

Peter Handke, whose defense of Serbian dictator Slobodan Milosevic makes him a controversial choice, was awarded the Nobel Prize in Literature for 2019 "for an influential work that with linguistic ingenuity has explored the periphery and the specificity of human experience." The prolific author has written dozens of books, a number of which are available in English, including The Goalie's Anxiety at the Penalty Kick.

It's unsurprising that the Swedish Academy chose to award the prize to at least one woman when you consider the reason for two awards in the first place: 2018's award was postponed amid a #MeToo controversy concerning Jean-Claude Arnault, the husband of Swedish Academy member Katarina Frostenson. Last year, Arnault was convicted of two rapes, and Frostenson — along with several other members — was ousted from the Swedish Academy.

The #MeToo movement, though explicitly about sexual misconduct, is implicitly about inequality, power imbalance, and toxic masculinity, all of which have resulted in a world where women are vastly undervalued for their contributions to a variety of fields, including literature.

As reported by New Republic, the Swedish Academy seemed determined to amend their pathetic record this year. The new chair of the Swedish Academy's Literature Committee, Anders Olsson, made as much explicitly clear when he said, "We had a more Eurocentric perspective on literature and now we are looking all over the world. Previously it was much more male-oriented. Now we have so many female writers who are really great, so we hope the prize and the whole process of the prize has been intensified and is much broader in its scope."

Both winners this year, however, are Europeans, which hardly aligns with the Swedish Academy's mission to celebrate and reward authors who are historically marginalized. Perhaps they should award the Nobel Prize in Literature to a woman of color every year for the next century, to even things out.

More like this
Aesop's Queer Library Is Open
By Tomi Otekunrin
16 Novels That Paint A Realistic Portrait Of Abortion
By K.W. Colyard
Lauren Rae Is Bringing Back The Sex And The City Vibes In Her New Memoir
By Shahed Ezaydi
Annie Lord’s Memoir Will Make You Believe In Love Again
By Shahed Ezaydi
Get Even More From Bustle — Sign Up For The Newsletter