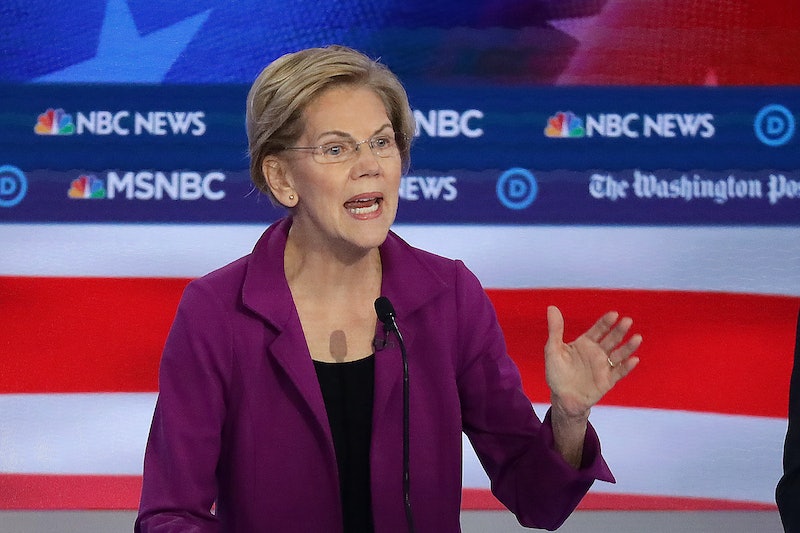 Abortion access took a last-minute run in the spotlight during Wednesday’s Democratic Debate in Atlanta, Georgia, a state that recently passed one of the country’s most restrictive anti-choice laws. Each candidate took a different approach to addressing abortion access in the U.S.; Sen. Cory Booker tied the issue to voter suppression, calling back to Georgia’s highly contested gubernatorial election back in 2018. Sens. Elizabeth Warren, Bernie Sanders, and Amy Klobuchar, however, all stressed their stances that abortion access is a fundamental right.

“I believe that abortion rights are human rights,” Warren said outright, responding to moderator Rachel Maddow’s question on whether or not there’s room in the Democratic party for anti-choice politicians. Warren took things a step further, however, stressing that she believes abortion rights are directly intertwined with income inequality in the United States.

“Understand this: When someone makes abortion illegal in America, rich women will still get abortions,” Warren said. “It's just going to fall hard on poor women.”

When Maddow pushed Warren, the candidate added, “I have made clear what I think the Democratic Party stands for.”

The candidates’ brief but passionate responses to the abortion question come after a heated year of abortion law debates across the country. In 2019, nine states passed laws banning early abortion — some of which were so restrictive they were near-total bans. And Americans don’t see the issue as black and white. While a record-high 77% of Americans don’t want Roe v. Wade overturned, according to NPR, 61% want more restrictions in place.

In response to a question about these state-level abortion bans, Klobuchar said the United States should codify Roe v. Wade at the federal level. While Roe sets a legal precedent that limits states’ ability to entirely ban abortion, codifying it would mean that Congress would pass a federal law to actually guarantee abortion access.

“What we have to remember is that the people are with us,” Klobuchar said, referencing the statistic of how many Americans support Roe. “And I predict this will be a big election issue in the general election.”

Though only given 30 seconds to respond, Sanders used his time to stress that abortion isn’t just a women’s issue, but rather one that will need to be addressed by men as well. “Let me just tell you that if there's ever a time in American history where the men of this country must stand with the women, this is the moment,” Sanders said. He ended with a message pointed at Republicans: “Understand that it is women who control their own bodies, not politicians.”

Though former Secretary of Housing and Urban Development Julián Castro did not qualify for this debate, the candidate responded on his own on Twitter. Castro took to Twitter to say, “Every person who wants an abortion should be able to get one.” Castro was the only candidate who spoke about abortion access as a right for all people seeking care, not just women. Castro has addressed trans and nonbinary people’s right to abortion before. At a Democratic debate in June, he stressed that trans people’s access to reproductive care needs to be part of the abortion debate.

While the candidates who spoke on abortion during the debate received enthusiastic applause for each of their takes, Castro was lauded online for using inclusive language. “I'm a trans man, and the fact that you say ‘person’ when every single person on that stage says ‘woman’ means the world to me,” one Twitter user wrote.

Even as the Democratic presidential candidates argue for more inclusive access to abortion care, red states continue to push extremely restrictive abortion bills. On Nov. 18, Ohio lawmakers introduced a bill that would criminalize abortion, putting both providers and patients at risk of prison time or even a death sentence by classifying abortion as murder.

Democrats have defended abortion consistently throughout this debate season, with varying levels of directness. However, change at the state and federal levels won’t happen quickly. States that have had extremely restrictive abortion bans blocked by federal judges continue to push for their cases to be taken to higher courts. Still, candidates like Klobuchar voiced their confidence that change is imminent.

“I just can't wait to stand across from Donald Trump and say this to him, ‘you know what? The people are with us,'” she said.