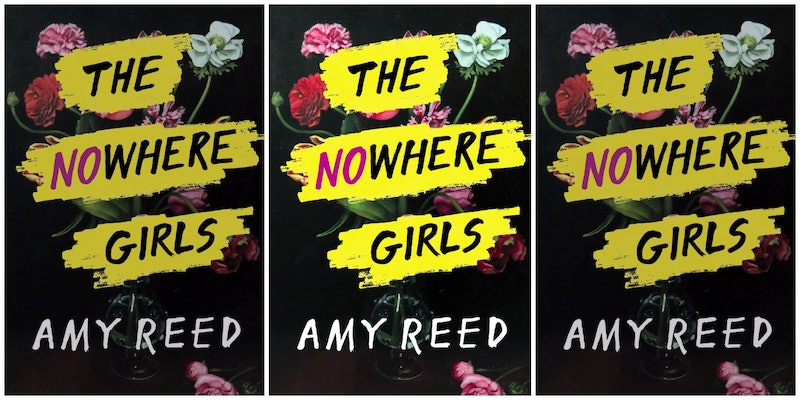 It's more important than ever that Americans think about the role of rape culture in their lives — and part of that means reading novels that challenge the status quo and inspire resistance. In Amy Reed's forthcoming novel, The Nowhere Girls, a group of teenage girls take a stand against the societal structures that influence their lives and their sexualities. The book comes out in October, but Bustle has an exclusive look at the cover below!

So, who are The Nowhere Girls? Grace Salter is new in town, and the circumstances that forced her to leave her old home are... pretty bizarre, to say the least. When Grace moves into her new home, she discovers that its former inhabitant, a girl named Lucy, was run out of town after she accused a group of popular boys of gang rape. Grace can't believe that Lucy never got justice for what happened, so, with the help of two friends named Rosina Suarez and Erin Delillo, she decides to unite an anonymous group of girls to take a stand against the sexist culture at their high school.

The Nowhere Girls, out Oct. 2017 from Simon Pulse, is a timely read about the effects of rape culture on teen girls... and a call-to-action to everyone out there who wants to fight back. Bustle is proud to exclusively reveal the cover for the novel — take a look:

Seriously — how excited are you to read this book? Pre-order it now at Amazon, and stay tuned for more reveals.