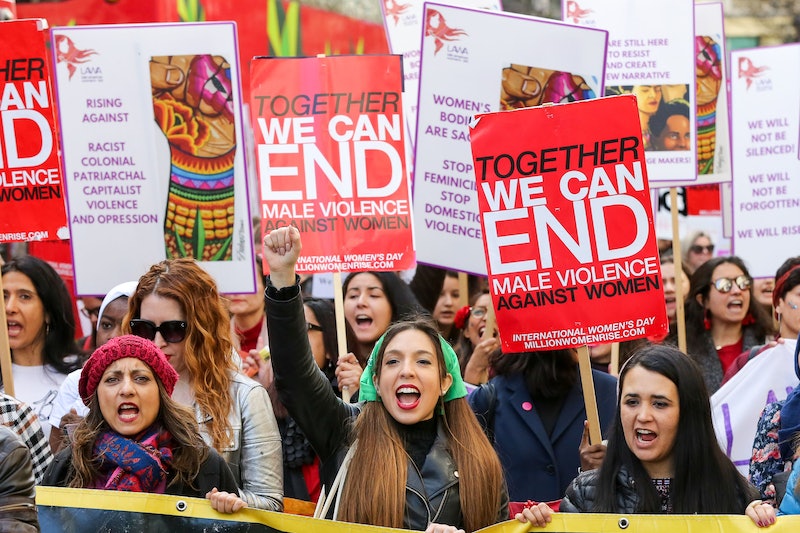 The fourth Femicide Census, carried out by women's campaigner Karen Ingala Smith, has found that more UK women were killed by men in 2018 than previous years. A total of 149 women, aged between 14 and 100, were murdered, and over half were killed by a partner or ex.

The 2018 figure is the highest number of femicides since data was first collected in 2009. (However, the report discloses that deaths in Scotland and Northern Ireland were only included from 2017, potentially contributing to the increased total.) In 2017, there were 139 cases of femicide in the UK.

As the Guardian reports, only 6% of women were killed by a stranger. Current and former partners were responsible for 61% of femicides across the UK. Almost half of women killed by partners and exes were planning to leave their partner, or had already left. Within the first month of separating, 30% of these women had been murdered, and 70% were killed within the first year.

Perpetrators in half of the cases had history of violence against women, according to the census. Three men had previously killed. It's therefore important "that we challenge received wisdom about seeing leaving a violent relationship being a straightforward way that women can remove themselves from the danger of a violent partner," Ingala Smith explained to the Guardian.

Figures also showed sons and stepsons killed 12 women in 2018, and five women lost their lives at the hands of a son-in-law or former son-in-law. Women between the ages of 26 and 35 were, says the report, more likely to be the victims of extreme violence.

"The whole point in highlighting these killings is so that those who control the response to men’s endemic violence against women take our data, learn from the patterns, and change policy and behaviour so that fewer women are harmed and killed each year," the report states.

Ingala Smith believes MPs fail to prioritise women's safety. "I think one of the problems with the politicians is that addressing men’s violence against women isn’t a quick win and it isn’t necessarily a vote winner, so it gets pushed down the priority list," she told Grazia.

"Piecemeal initiatives won’t make a big difference," she continued. "What we need is a very ambitious, wide-ranging, strategic response that looks at the causes of men’s violence against women at all levels in society."

"Looking at the way women are objectified and commodified, looking at sexual stereotypes and socially constructed gender, looking at how the law works, how education works, how the health service works, how we support people who’ve been subjected to violence."

Bringing back the Domestic Abuse Bill, with a focus on helping migrant women and ending the "rough sex" defence; increasing funding for women's refuges; and ending the culture of victim-blaming are just three of the policies recommended by the census.