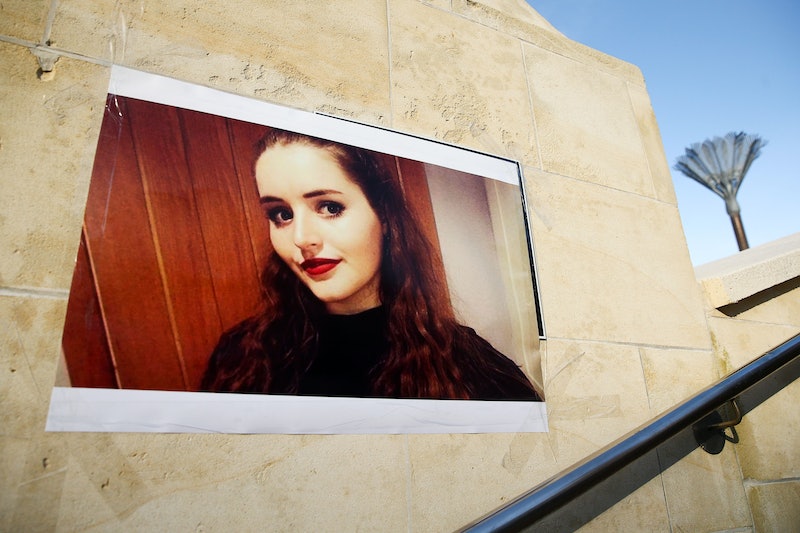 A women's campaign group is calling on the government to stop "rough sex" being used as a legal defence in cases where women have been injured or killed. We Can't Consent To This is highlighting the need for such change after a 27-year-old man was found guilty of murdering British backpacker Grace Millane in New Zealand. He claimed the 22-year-old had accidentally died during "rough sex", per the BBC.

“All of us at We Can’t Consent to This are relieved to hear of the murder verdict and hope it may bring small comfort to Grace’s family and friends,” Fiona Mackenzie, the group's founder, told Stylist. But, she pointed out, "Grace is now the 59th UK woman to be killed by a man in what he claims to be sex, that she requested, gone wrong."

As the Guardian reports, research by the group revealed that the number of similar claims made in UK courts over the past 20 years has risen tenfold. The past decade has seen 30 girls and women lose their lives over what was claimed to be consensual rough sex gone wrong.

We Can't Consent to This notes that only 17 of these cases resulted in a murder verdict. Nine were deemed to be manslaughter and two cases were cleared. One case is yet to make its way to court and another — that was first treated as non-suspicious by police — led to a murder conviction after a confession by the victim's husband.

Although this defence isn't admissible in court, per the Guardian, campaigners believe citing it before a jury results in lesser charges and sentences. We Can't Consent to This is therefore asking for amendments to the Domestic Abuse Bill; a bill that has faced numerous delays and is now in limbo, per Rights Info, due to the upcoming general election.

First presented to the House of Commons in October, the additions state that consent is not a defence to "the infliction of injury" in domestic abuse behaviour cases, even if injury "occurred in the course of a sadomasochistic encounter." They also state that homicide cases involving injuries inflicted in the course of domestic abuse should not charge a person with anything less than murder.

You can support the campaign by asking your local election candidates to commit to bringing back the Domestic Abuse Bill, and these amendments, in Parliament.

Legal changes aren't the only alterations needed. As the media coverage of Millane's trial proved, an attitude overhaul is in order. "We must stop blaming women for their own homicides," Mackenzie told Stylist, adding: "We need a change in attitudes too; that 'sex' isn't something that causes the fatal injury and killing of women."

Media reporting must also change, she noted, pointing out how recent headlines "faithfully repeated the lurid, victim-blaming stories this man's defence team told about Grace, that she was responsible for her own death."

More like this
The Families Of Grenfell Tower Are Still Waiting For Justice, Five Years On
By Bustle UK
5 Concrete Ways To Take Action Against The Rwanda Deportation Plan
By Rachel Mantock
Windrush Victims Are Still Waiting For Compensation
By Sam Ramsden
Mollie King & Stuart Broad Have The Most Relatable Wedding Plans
By Sophie McEvoy
Get The Very Best Of Bustle/UK